Now reading: Why anyone who loves waterfalls needs to plan a trip to Southern Idaho
Share
PrevNext

“WHEN YOU HEAR PEOPLE talk about the waterfalls in Southern Idaho, they’re almost all going to start with Shoshone Falls,” Paul Melni, the owner of AWOL Adventure Sports in Twin Falls, Idaho, told me as we got into a pontoon on the Snake River.

The reputation is well earned: Known as the “Niagara of the West,” Shoshone Falls is 212 feet high and some 900 feet wide. In peak season, about 900,000 cubic feet of water drop off the rim every minute — about the same amount of water in the Lincoln Memorial Reflecting Pool, or the equivalent of about 10,000 basketballs falling over the edge every second.

But we were on the Snake River in September, which is a time of year that the “Niagara of the West” looks more like a white-washed cliff on another planet than one of the most striking cascades in North America. From late summer through winter, the water is diverted to quench the region’s farmland. Passionate waterfall chasers expecting to kayak alongside the thundering deluge may find this disappointing, but it’s just an excuse to venture out to explore the seemingly endless number of other falls across Southern Idaho. 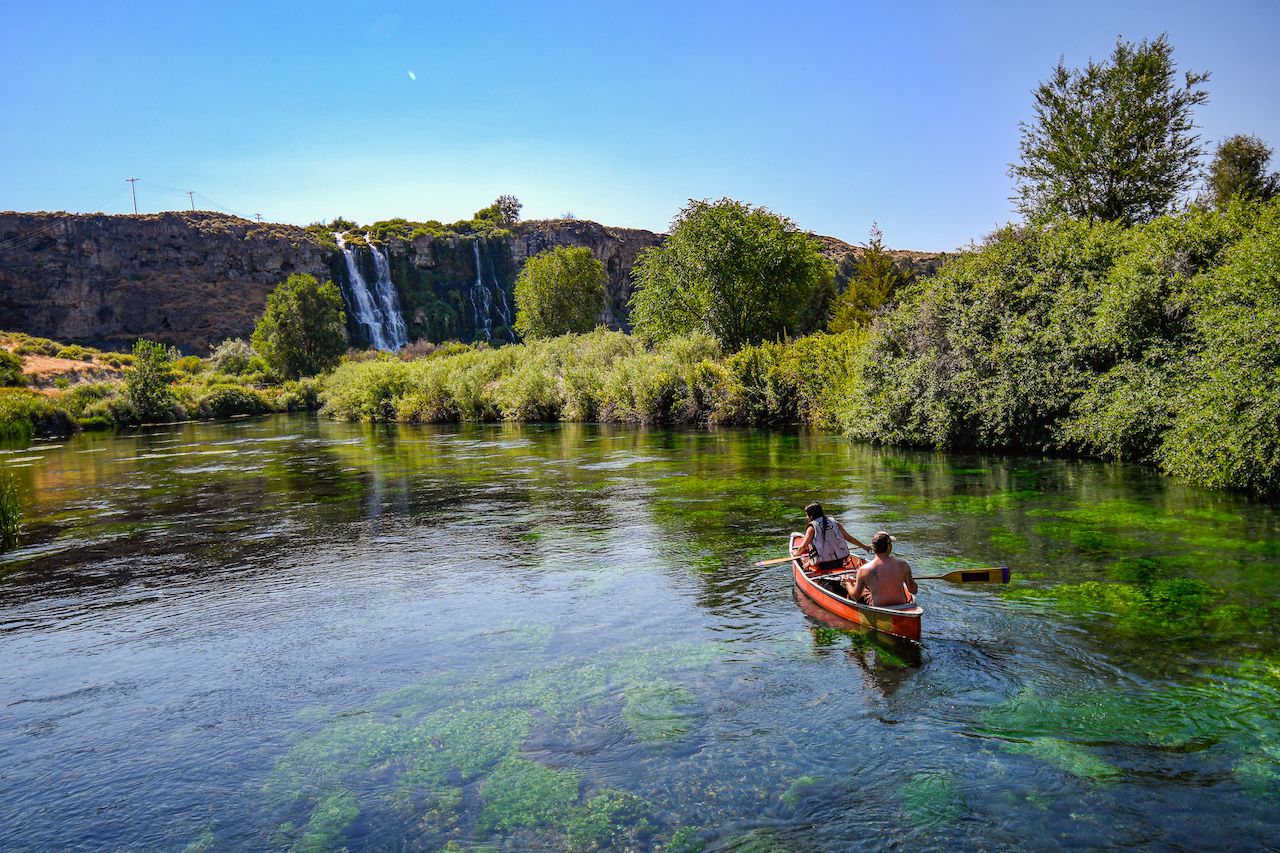 Melni directed the pontoon east toward Pillar Falls. This stretch of the Snake River — the ninth longest river in the United States — between the town of Twin Falls and Shoshone Falls is the only way to get to the locally loved Pillar Falls. It’s also one of the most striking sections of the river thanks to the massive Snake River Canyon. Every so often on the ride, Melni interrupted himself to point out another waterfall coming from the canyon walls, which can reach up to 500 feet high from the base.

Along with waterfalls, there’s another eye-catching sight along the way: BASE jumpers leaping from the I. B. Perrine Bridge and parachuting down to the canyon floor. It’s the only bridge in North America where people can BASE jump year-round without a permit, and we saw a handful of people take the plunge in the time it took for Melni to slowly steer the boat under the bridge.

Yet we were there to see waterfalls, not adrenaline seekers. In particular, Pillar Falls. On Google Maps, our destination looks like it’s underwater. An outcropping of rocks about a mile and a half from the boat launch at Centennial Park says otherwise.

Pillar Falls is named after twin boulders that tower above the rocks. Water rushes around the rocks that stick out enough to climb and walk across, and clear pools of water sink dozens of feet down. Looking into them reveals fish and crawfish stuck in the pools until the high water season returns. The Bonneville Flood that happened about 17,400 years ago brought the boulders to this part of the Snake River. Some boulders got stuck on the bottom, Melni explained as we hopped from rock to rock, and the rushing river caused the rocks to spin and drill the deep pools over the ensuing centuries. 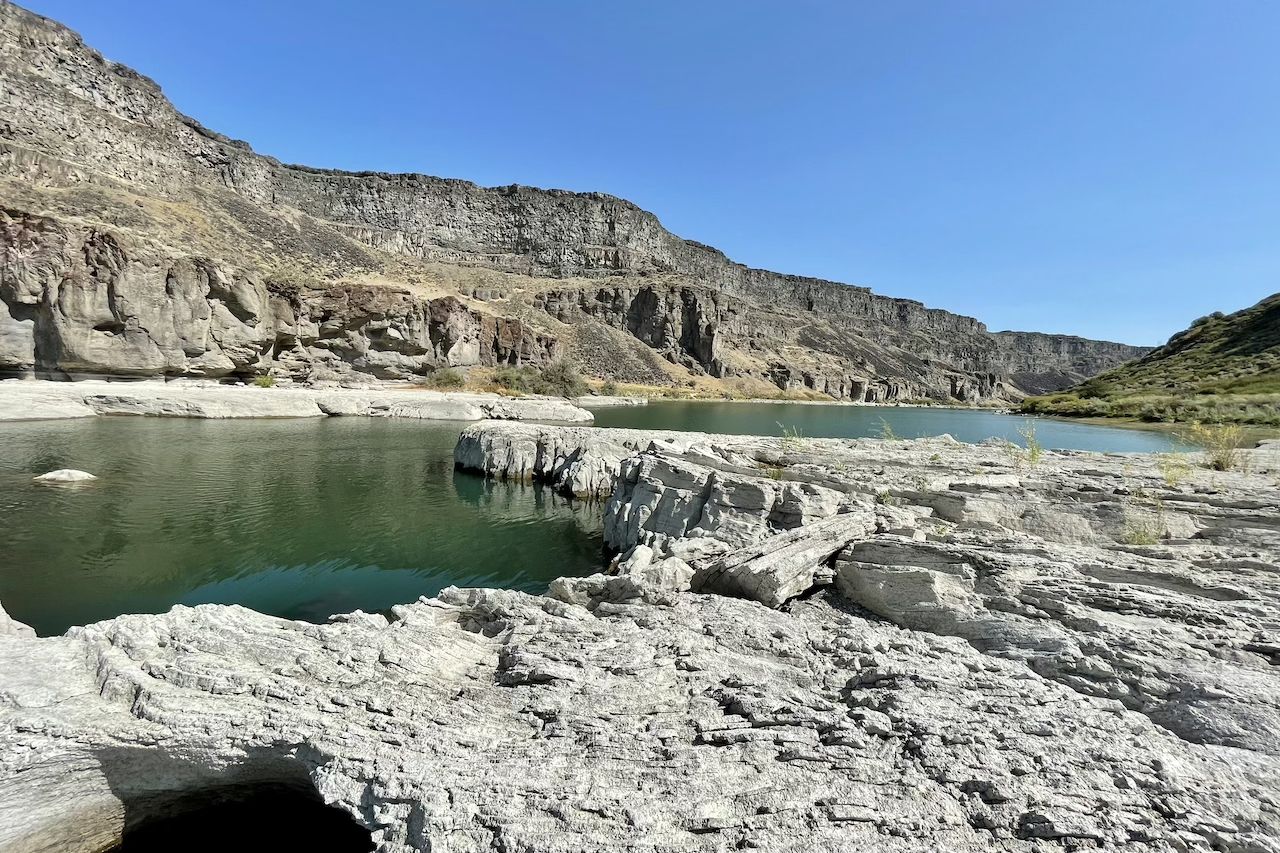 People can take a dip into the larger bodies of water, and AWOL has held Scuba training courses in the deepest ones. I strolled along and got my feet wet where the flow was most gentle. It’s relaxing, to say the least, to be in a spot accessible only by boat with your feet in the cool, clear pools and nothing but the sound of birds and rushing water in the air.

Pillar Falls is a worthy destination in and of itself, but it’s also a stopping point for kayakers heading all the way to Shoshone Falls. Through AWOL, you can join a tour to the base of Shoshone falls, and crew members will haul your kayak across the rocks by Pillar Falls so all you have to worry about is the paddling. 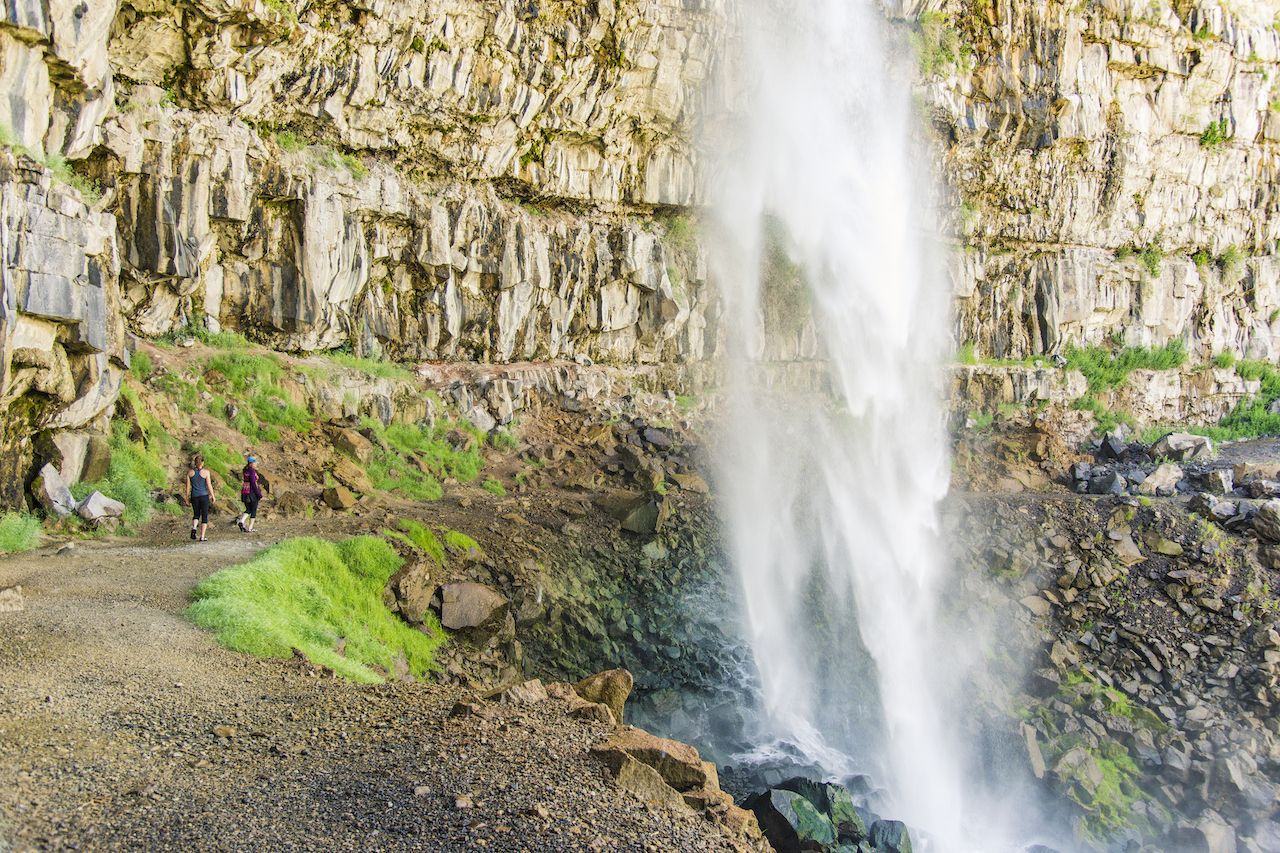 Pillar Falls was just the start of a week in Southern Idaho that I spent falling for falls. The region is overflowing with thousands of waterfalls around the canyon and elsewhere.

At Kelley’s Canyon Orchard, a working pick-your-own orchard and fruit stand with an historic farm-stay Airbnb, a waterfall on the canyon wall side of the property is the primary water source for the cherries, apricots, peaches, pears, nectarines, plums, apples, tomatoes, and melons. It’s also a lovely backdrop and soundtrack to any time spent among the trees. At Ritter Island in Thousand Springs State Park, you’ll find water gurgling out of the surrounding canyon walls and falling to the river below just about everywhere you look.

The seemingly endless number of waterfalls in the region come thanks to the Snake River Plain Aquifer. It covers some 10,000 square miles of Southern Idaho, or about the size of Lake Erie. As Boise State Public Radio notes, the water comes from mountain snowmelt and flows through porous basalt rock that formed from volcanic eruptions millions of years ago. While gorgeous, the waterfalls aren’t the main reason the aquifer is important to Idaho. The aquifer is how the state is able to support the expanse of agriculture and dairy farms in the region, and, by extension, support large companies in the area like Chobani and Clif Bar.

Robin Kelley, from Kelley’s Canyon Orchard, says she’s had people stay at her farm Airbnb who are passing through the area solely because they’re chasing waterfalls. It’s not a bad game plan. There’s plenty of things to do, see, and eat around Southern Idaho. Hiking at the Little City of Rocks for the Native American paintings and the area’s natural arch and hoodoo rock formations, for example. Or stopping for ice cream made from local dairy at Cloverleaf Creamery in Buhl, and ending the night at Koto Brewing or Milner’s Gate in Twin Falls.

At the heart of any trip here, however, is the water itself. The best way to see the waterfalls is to wander and chart your own path. It’s not hard to stumble upon a waterfall that would be the centerpiece of a trip if it were anywhere else, but in Southern Idaho it’s just one gorgeous waterfall among a seemingly endless crowd of gorgeous waterfalls. That said, here are some key stops you won’t want to miss. 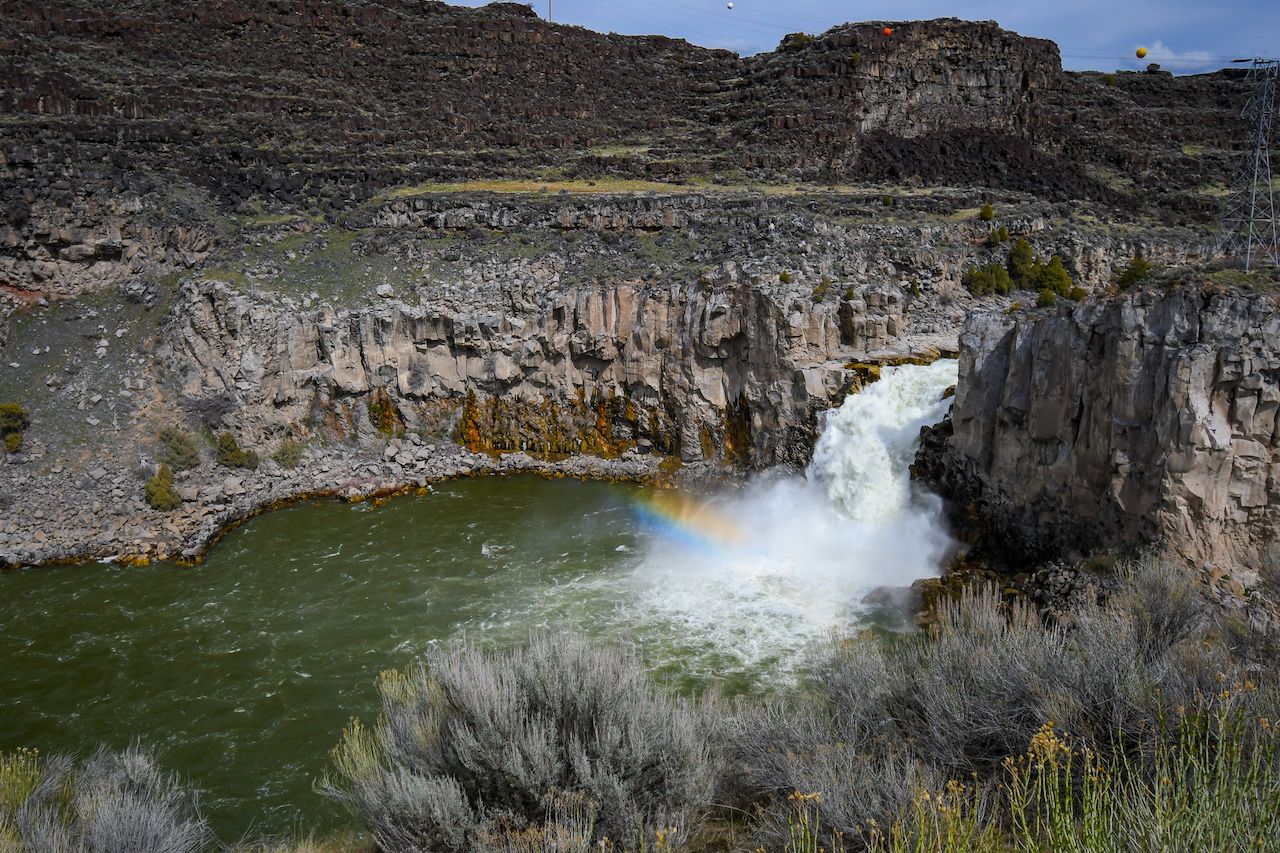 Despite the name, Twin Falls is only one waterfall — the second had its stream diverted to feed a hydroelectric dam. That doesn’t mean that this natural feature that the town of Twin Falls gets its name from is any less worthy of a stop (though it’s technically located in Kimberly rather than Twin Falls). The best time to see the 125-feet-tall waterfall is March through June. 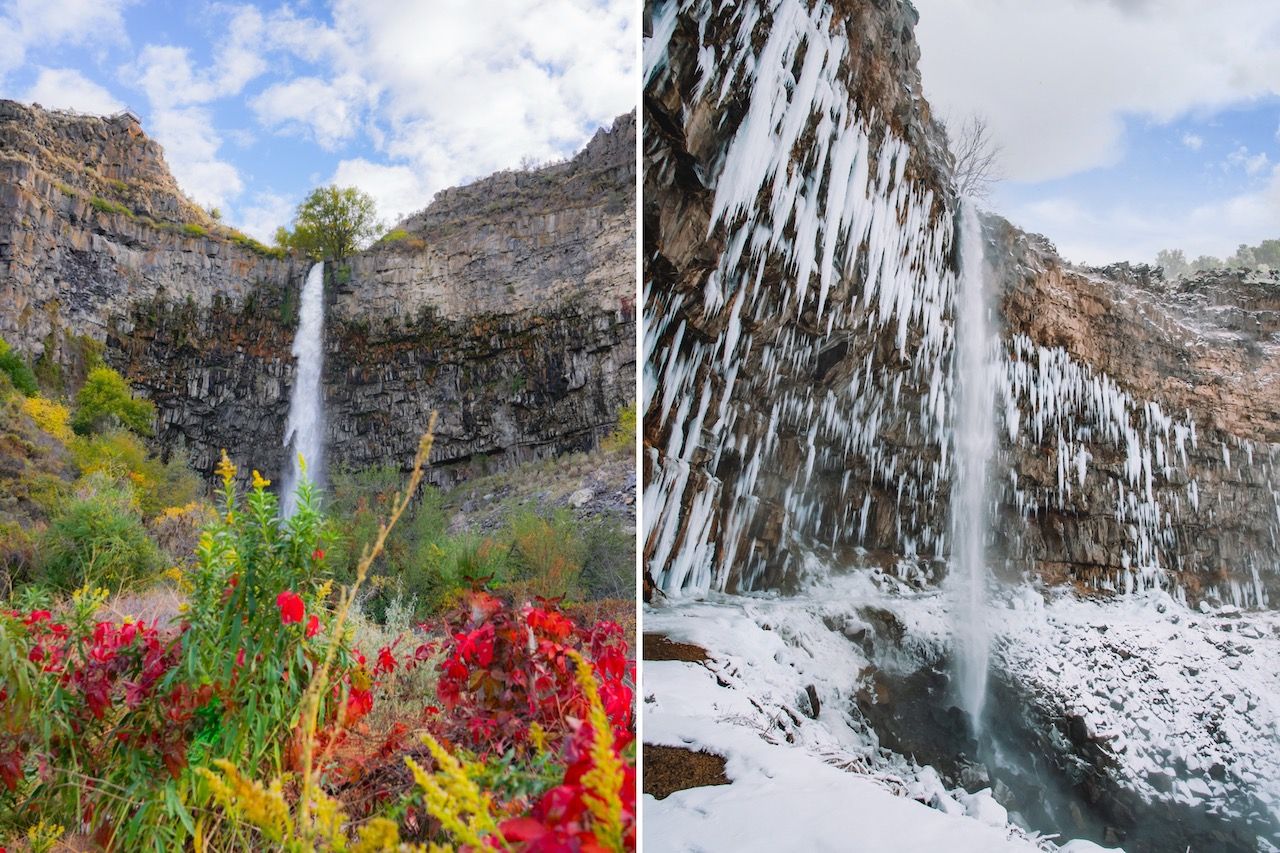 No need to plan around a specific high-flow time of year for Perrine Coulee Falls. Located not far from the I.B. Perrine Bridge, this site is accessible year-round to hike near, around, and behind the 200-feet-tall waterfall. A good place for a photo-op is the Snake River Canyon Rim Trail or Centennial Park. 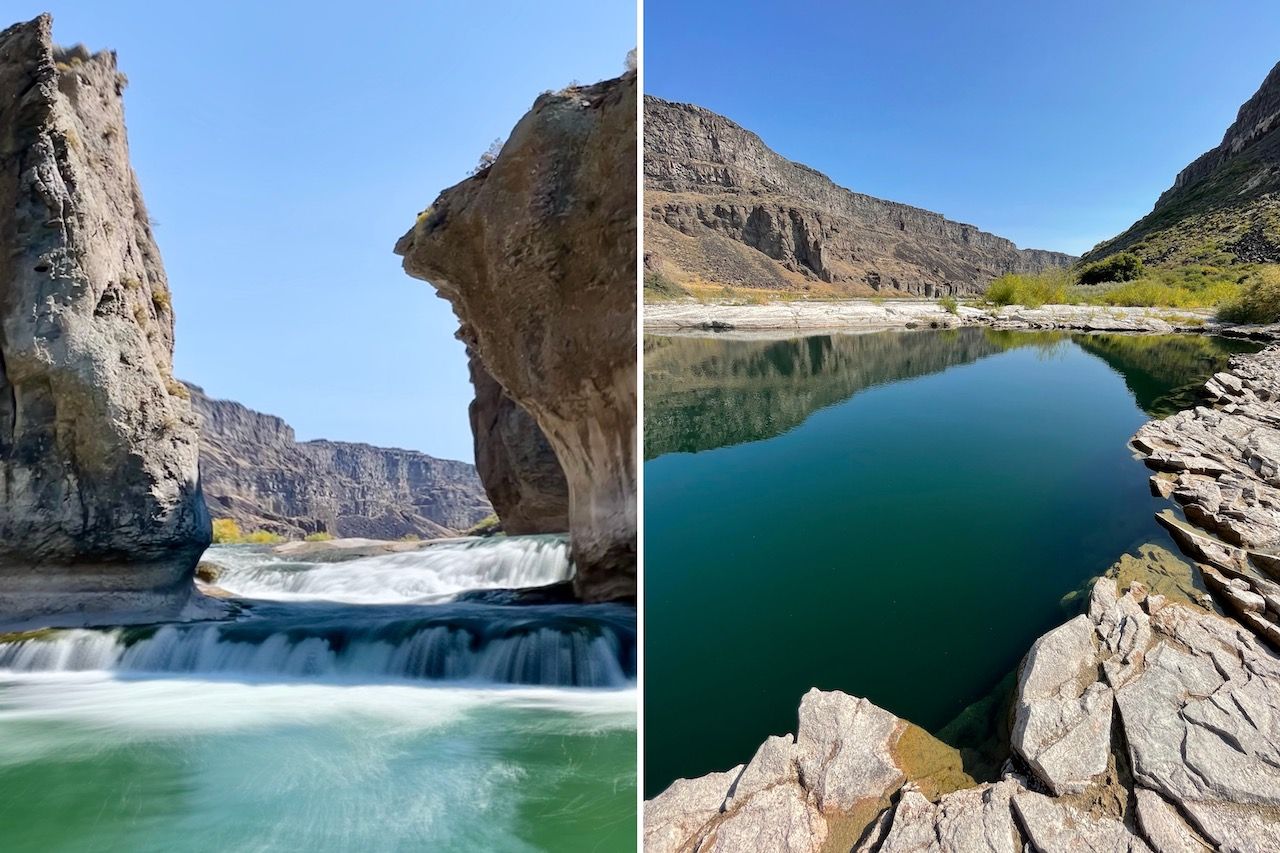 Grab a kayak or hitch a ride on a pontoon to follow the river about a mile and a half from Centennial Waterfront Park to get to Pillar Falls (or if you’re up for it, a stand-up paddleboard will get you there, too). Park your watercraft on the north side of Pillar Falls and then get to exploring the pools and drops in the area. 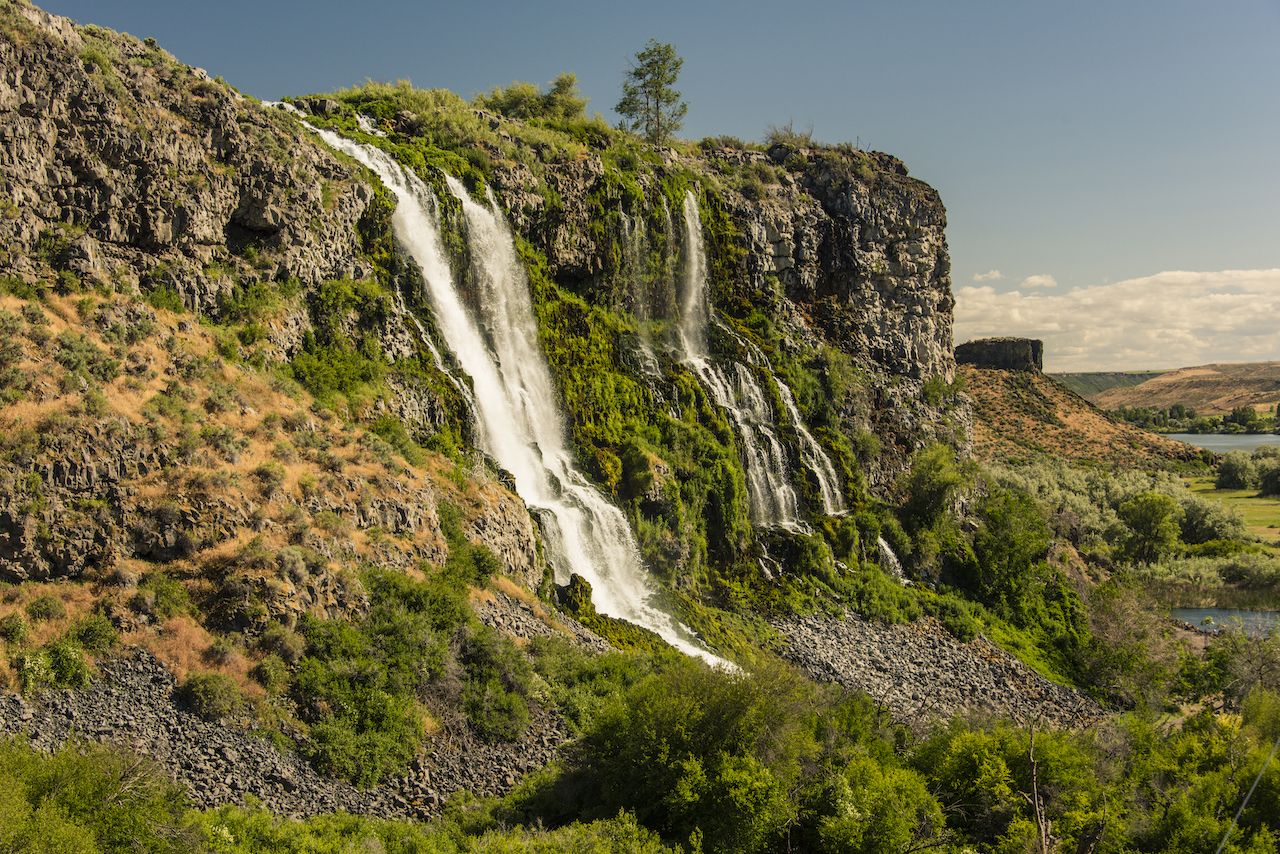 Some waterfalls stand out as a singular attraction, others are defined by groups. You’ll find both here. The largest alone is worth a visit, which is near impossible to miss unless you get too distracted by the crystal clear water surrounding Ritter Island. To see springs bursting forth from the canyon wall, head over to Minnie Miller Springs a quarter mile from the Minnie Miller homestead. 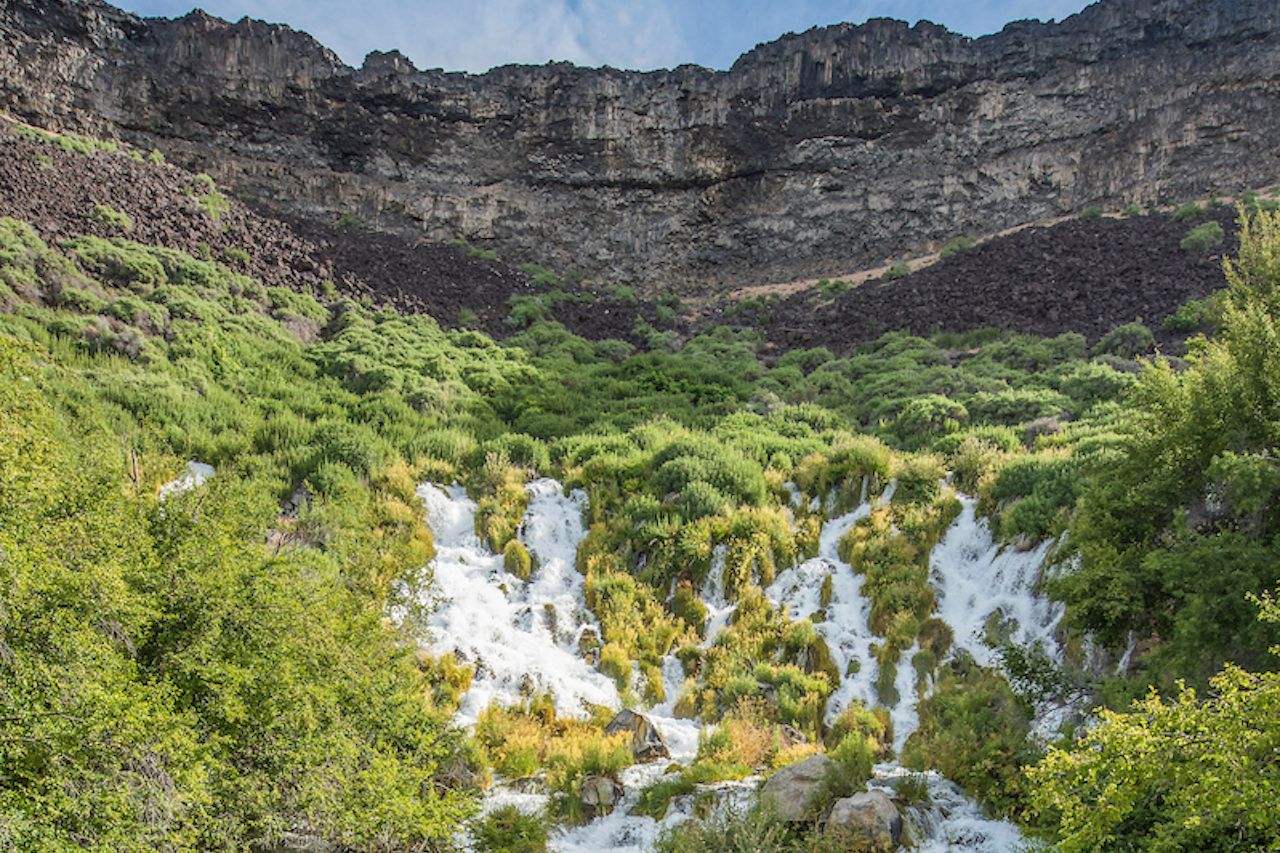 While it lacks a sheer cliff face drop like some of the other striking waterfalls on this list, Niagara Springs is more than worth a visit on any waterfall chaser’s itinerary. The spot is a National Natural Landmark where water falls out of the canyon walls at 250 cubic feet per second. In the warmer months, make time to visit Kelley’s Canyon Orchard across the Snake River for delicious fruit. 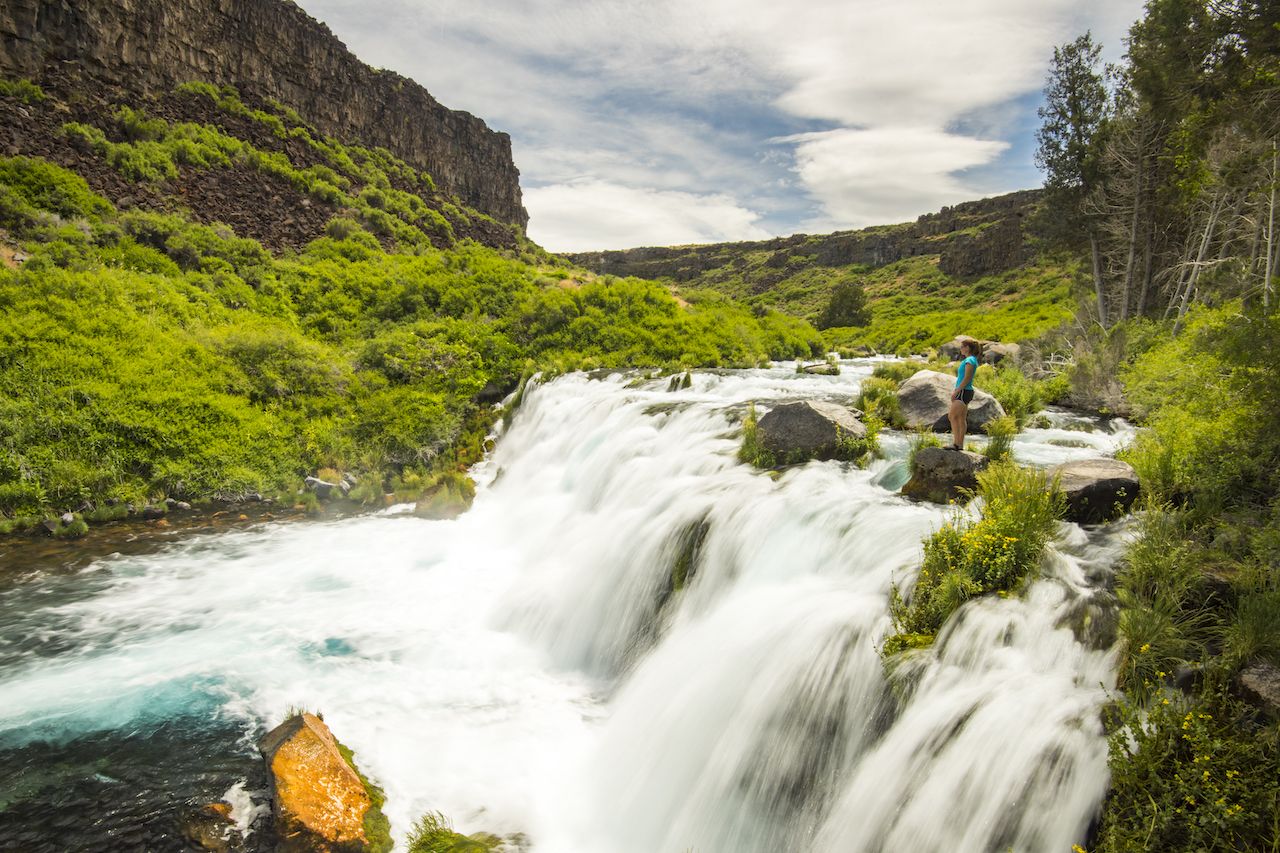 Come for the wheelchair accessible viewpoint that looks over a massive waterfall, stay for the wildlife and more remote falls. Box Canyon is a bald eagle wintering ground where the country’s bird can easily be spotted alongside golden eagles. A trail down to the canyon will get you to a tumbling and remote waterfall that’s a joy in the summer.

Non-stop from Miami to San Juan, Puerto Rico for only $134 roundtrip (Jan-Mar dates)

These are the prettiest public toilets in the world