Now reading: When the world turned upside down, I moved to Mexico and learned to surf
Share
PrevNext

NOTHING FELT normal last year. In my attempt to salvage some idea of bettering myself against the apocalyptic backdrop of 2020, I focused on surfing. I was shaken out of my routine but ended up finding my feet again and carving out a new life for myself, one that in many ways challenges my idea of what made me happy in my pre-COVID existence.

A “hidden port” south of the border 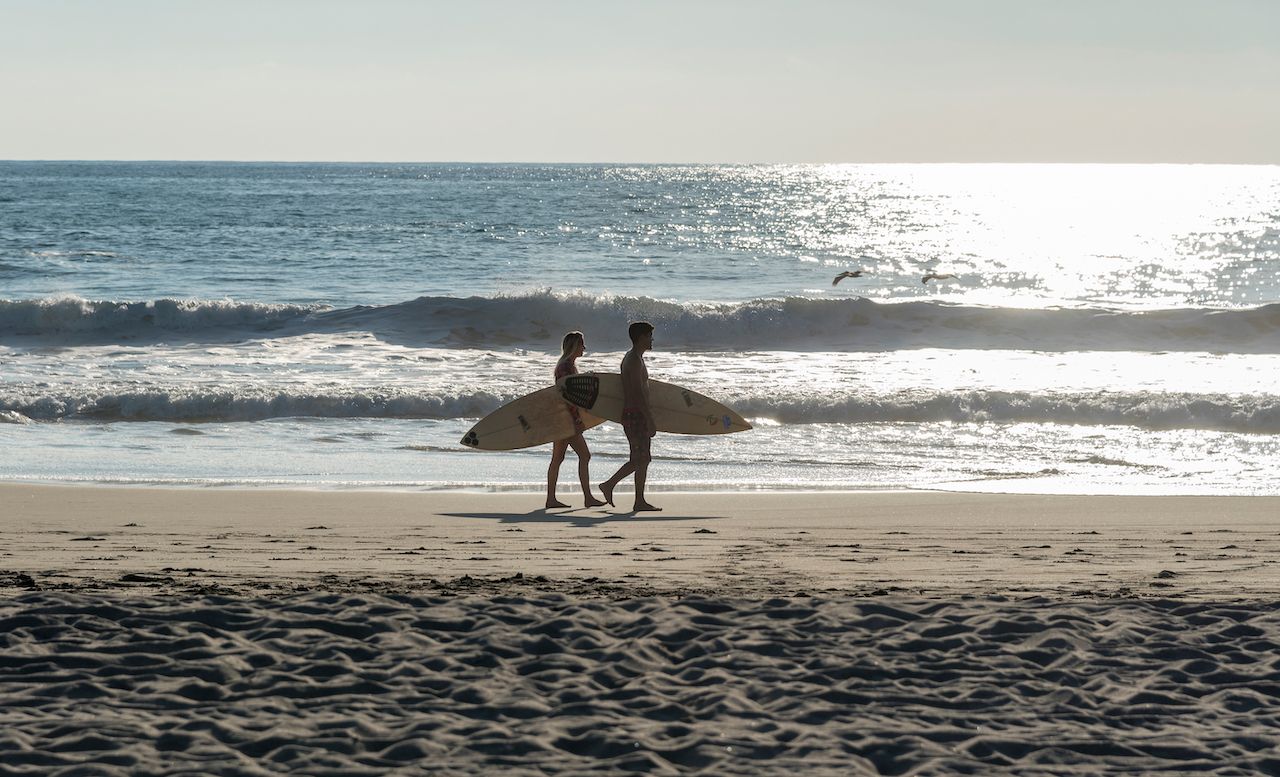 Even before the pandemic broke out, I was paying month-to-month rent and working remotely. I prided myself on having the freedom to travel and live independently and unattached. This non-tethered existence served me well when, after six months of quarantine, I decided to move to Puerto Escondido, Oaxaca, a small surf town in southern Mexico. Living in a small tropical town felt safer to me than living in San Francisco, and one of the many things that I instantly loved about life in Puerto Escondido is that everything takes place outdoors, which felt freeing after so many months of confinement.

One of my main goals for last year — in lieu of my original ambitions of career growth, enjoying city life, and traveling for work — became learning to surf. Learning to surf is a lofty, arduous journey filled with cuts and bruises (in my case, it also included a black eye when my board slammed right into my face underneath a wave), strangers yelling at you, and near-drownings. Yet through the discomfort you sometimes catch these moments of purity, of glory that make all the growing pains seem like if they are not worth it yet, that someday they will be.

Puerto Escondido is a small community of locals and expats living in Mexico, as well as visitors from all corners of the earth, brought together by a love for the waves and the easy-going mentality of the place. Puerto Escondido means “hidden port,” and the people here like the idea of being hard to access by road or plane, with no direct flights to the United States or most Mexican cities. Almost all the flights from the airport in town are to and from Mexico City. Living in this lesser-known town has many benefits, but when it comes to all-year-round surfing, the secret is out. 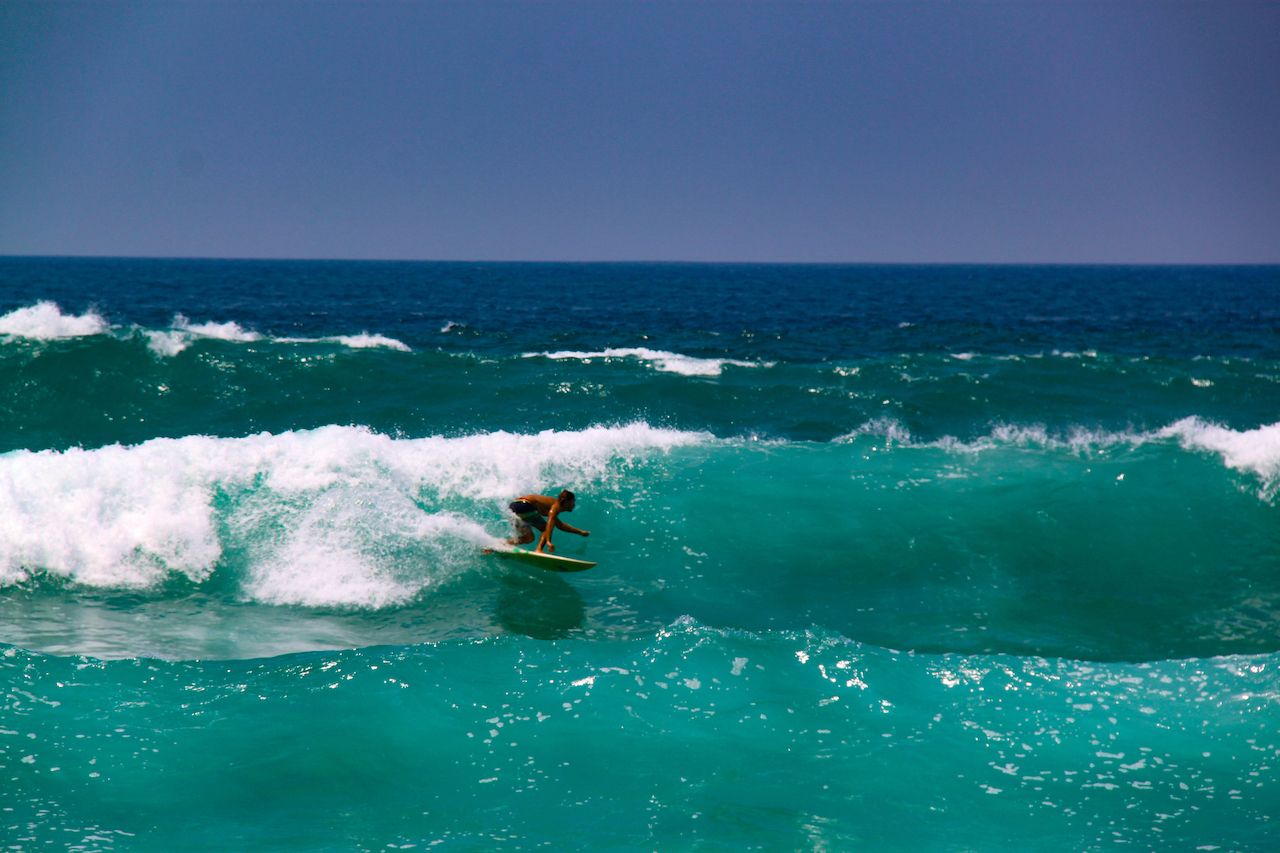 One of the hardest parts about learning to surf in Puerto Escondido is that everyone wants to learn to surf, and if they are not learning then they are already pros, catching every single wave and leaving very few for the beginners. You’ll find numerous instructors giving classes to five first-timers at once, knocking into each other like bumper cars into waves, the lesson-takers having no idea how to avoid the numerous obstacles. This chaos can be a huge deterrent and annoyance for someone at my level of surfing. I think to myself, “If only I had a tiny bit of SPACE I could catch tons of waves.” A girl can dream, right?

So when Omar, a born-and-raised local surf instructor and friend of mine, mentioned a vagabond style surfing trip to a desolate location I immediately agreed. All I knew, as I set my alarm for 6 AM the next morning, was that we were going to a legendary surf break that is closed to outsiders, getting there either by boat or some kind of car on the beach situation, and that I could sleep on the beach that night where the ocean breeze would keep the mosquitos away.

On the road I learned more details about our destination: Barra de la Cruz, just over three hours driving south down the Oaxacan coast, an infamous right point break off the shore of a small indigenous Chontal village. Barra de la Cruz is accessible by only one road and boasts just a smattering of tiendas and essentially one restaurant. Unfortunately, I only learned once we were en route that the village had been in strict lockdown since April 2020.

Making plans on the fly 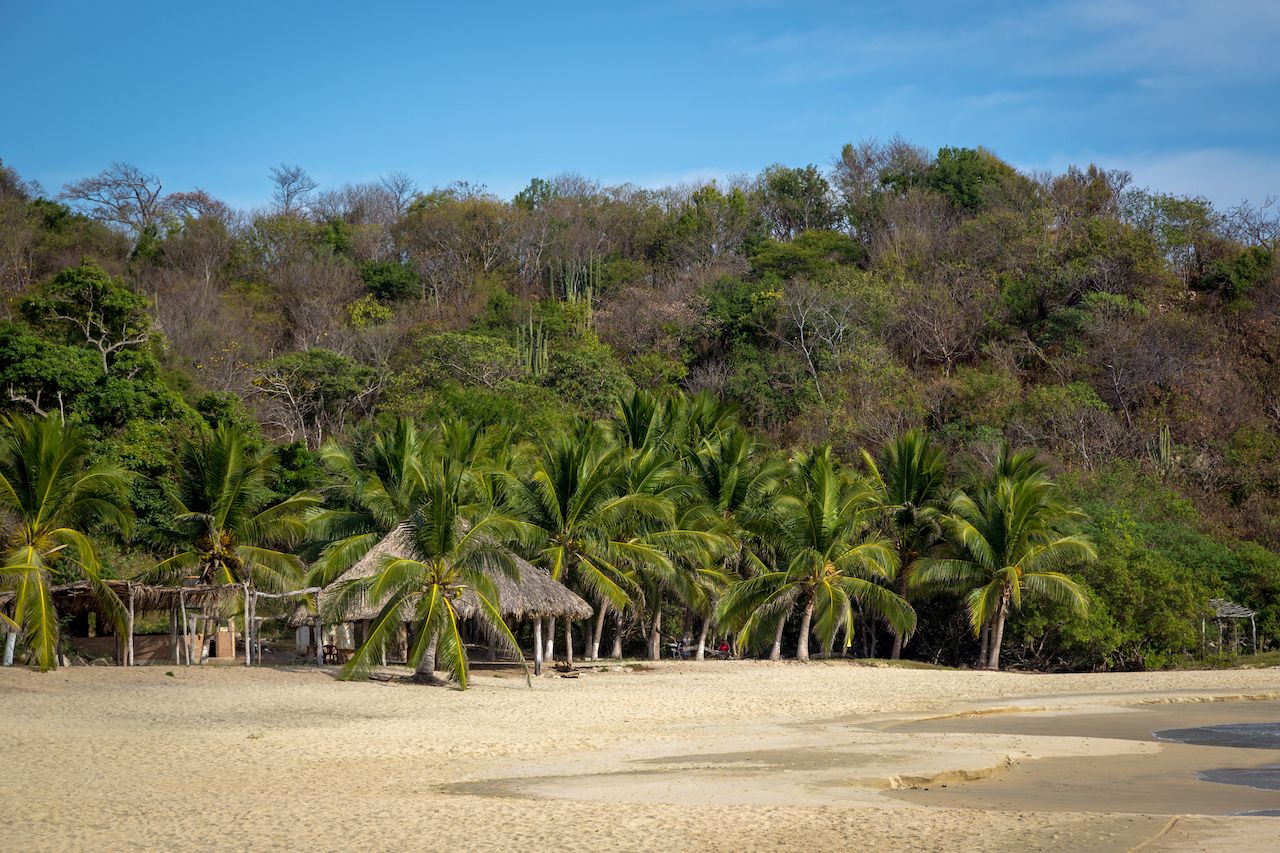 Omar had several ideas for accessing the waves without passing through the pueblo so that we wouldn’t put the villagers in danger. My fellow surf-tripper explained to me that in “regular” times, Barra de la Cruz was just as crowded as any break in Puerto Escondido and not a place for beginners because the waves were so saturated by higher level surfers. She said that the biggest restaurant in town, a pizza spot called Pizzeria el Dragon, was the spot for meeting “young, hot surfers.” Not so much now. Sure it was going to take extra effort to get there, and a little off road adventuring, but we were going to one of the most famous and celebrated surf point breaks in Southern Mexico, and we were going to have it all to ourselves.

After a three-and-a-half-hour drive, we passed the turnoff for Barra de la Cruz, essentially a dirt path, and turned into another dirt path about nine miles further south, into Playa Grande. Playa Grande is an isolated, windswept beach with nothing but a fish camp, the beach littered with fishing nets and small wooden boats. The sand is golden, and the waves crash against the shore endlessly in a hypnotic manner. Omar was friends with the men who manage the fish camp. We pulled up to a small palapa, an open-air hut made with a palm-leaf roof, overlooking a beach with large waves closing out fiercely right at the shore. I pressed Omar for a little clarity about what was going on and where we were.

“The plan is no plan,” Omar said for the fifth time that day.

The one bit of information I was able to glean was that here on Playa Grande, it was up to you to find a place to sleep, crashed out in a hammock or under the palapa. I had brought a yoga mat and the sheets, blankets, and pillows from my bed at home, with the hope that I would have a night full of shooting stars, lulled to sleep by the never ending crash of waves.

Surfing until you can’t see the waves 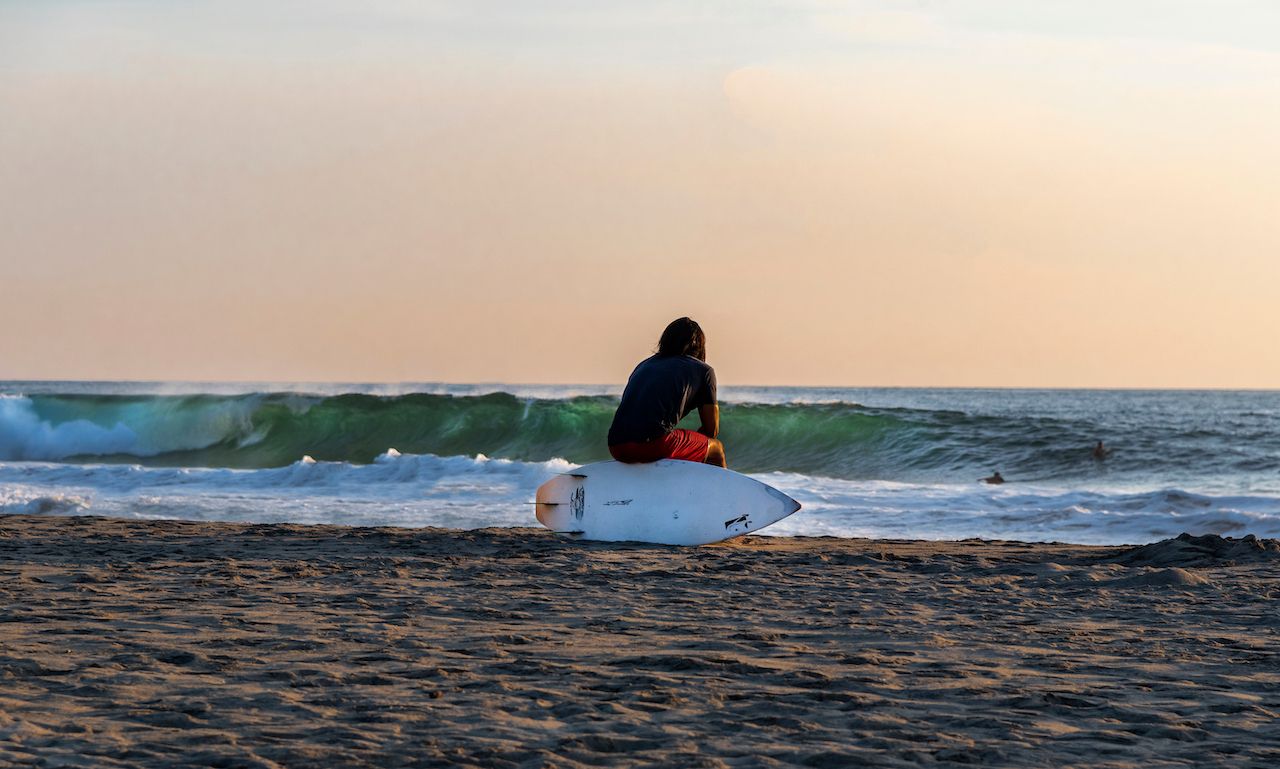 We enjoyed fresh, lightly fried whole small reef fish with homemade salsa and ate with our hands sitting on the beach, tossing the bones into the waves. Most of my meals in Mexico have been taken outside in the 80-degree weather, but this meal felt special for its proximity to the wild seas and to the men who had caught the fish.

The fishermen would drive us to the surf break for $2,000 pesos (roughly $100) in their boat. Coercing the small wooden fishing boat called a panga back into the ocean from the dry sand, and then past the powerful shorebreak, was no small feat. After 15 minutes of slowly rocking the boat towards the water, we eventually passed through the crashing waves and set off for Barra de la Cruz, soaking wet and surfboards in tow.

There were zero other people in the waves that late afternoon. The surfing was hard but amazing, the swell almost overhead and peeling steadily off of the large intruding rock formation. It felt like we were a bunch of kids locked in a candy store. As the sun set and it became too dark to deny, we returned to the boat and drove back to Playa Grande for the night. The local fishermen’s wives prepared us four lobsters and another seven small fried fish, as well as rice and salad. I went in the truck to buy beer for the whole lot as both an expression of gratitude and a deep personal desire to drink a few after the exertions of surfing all evening.

Cold beer and the warmth of connection 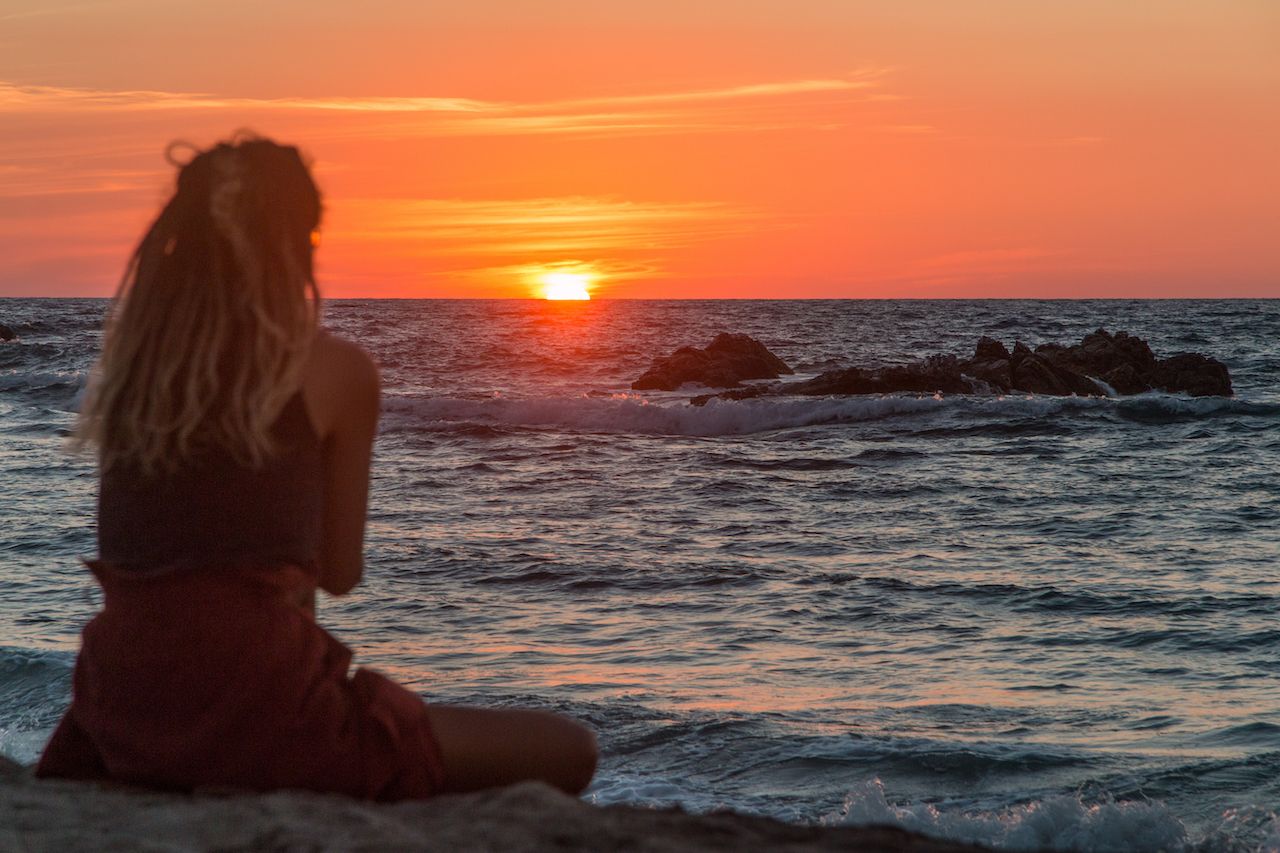 The plan was to wake up early the next morning for a second session and then to drive the truck as far on the desolate, sandy beach as we could without passing into the village of Barra de la Cruz. From there we would grab our boards, walk 20 minutes along the shore, surf for two or three hours, and then drive home. The day before on the boat I had brought all of my prepared-girl supplies: sunscreen, loads of water, clothes, a sarong, a snack. It had all gotten soaking wet and remained unused. This second day I had to carry a heavy longboard and figured to myself I would be fine with nothing. I had no extra hands and struggled simply with the weight of my board.

We didn’t leave Barra until sundown again. From 8 AM to 7 PM we stayed on this private surf paradise with very few supplies. The small family that tends the beach (charging the few visiting surfers a $25 USD fee to enter the beach from their own chartered boat) generously cooked us a wonderful meal of small fried fishes again and an amazing salad made with fresh nopales (cactus pads), chilies, red onion, and tomato. I don’t think we would have survived this long day without our daily intake of small fried fish, and I appreciated their kindness.

As a lover of big cities, this last year has given me a true appreciation for wide-open nature. I don’t know if before 2020 I could have appreciated the glory of being the only person on a beach, in a wave, or anywhere for that matter. This weekend journey into the unknown left me feeling strong, peaceful, and appreciative and would not have been possible during “normal” times. Certainly, there has been a lot to grieve since the pandemic began, but every once in a while you can find a silver lining and make the most of this crazy world that we are all living in together.

10 of the most beautiful alleys around the world