Breeze Airways is a new airline that will launch in the US in the coming weeks, and it’s founded by the same person behind JetBlue. The airline was initially supposed to launch in 2020, though understandably the timeline was pushed back a bit.

Well, it looks like the airline could begin service within the next several weeks, as the US Department of Transportation (DOT) has tentatively granted Breeze Airways the authority to begin passengers flights.

Here’s everything we know about Breeze Airways so far:

David Neeleman is the founder of several airlines, including JetBlue. He hasn’t worked at JetBlue since 2008, and in 2018 he announced that he planned to launch a new airline in the US.

While Moxy was used as the working name when the airline was first announced, we knew all along that the carrier wouldn’t necessarily operate under that name.

Breeze Airways was revealed in early 2020

In February 2020 it was revealed that Neeleman’s new airline would be known as Breeze Airways. Breeze Airways’ livery is an interesting one — on the one hand it’s unique and stands out, while on the other hand it already looks kind of outdated to me.

Rendering of Breeze Airways Airbus A220-300

Breeze Airways will launch in spring 2021

As mentioned above, Breeze Airways was supposed to commence operations in 2020, though understandably the pandemic has delayed things a bit. Even though many believe a recovery will take years, Breeze still plans to launch flights in the first half of 2021.

The airline will primarily be focused on leisure domestic flying, which will arguably be the first type of demand to recover quickly.

As far as Breeze’s progress goes:

Breeze Airways seems to have a specific plan for the routes it will launch, but it’s not making those plans public yet (which is understandable, for competitive reasons).

The long term plan is for Breeze Airways to fly Airbus A220s, given that it has 60 of these planes on order. However, initially the airline will lease Embraer 190s & 195s from Brazil’s Azul. This is mutually beneficial, as Azul is looking to get rid of those planes anyway, in favor of new Embraer 195-E2 jets.

Like I said, the Embraers are a temporary solution, and the plan is for Breeze’s fleet to eventually consist exclusively of A220s.

Breeze’s Embraers will feature 108 to 118 seats, meaning they will stay in the same configuration that they previously had with Azul, which is a one cabin layout with an extra legroom economy section. 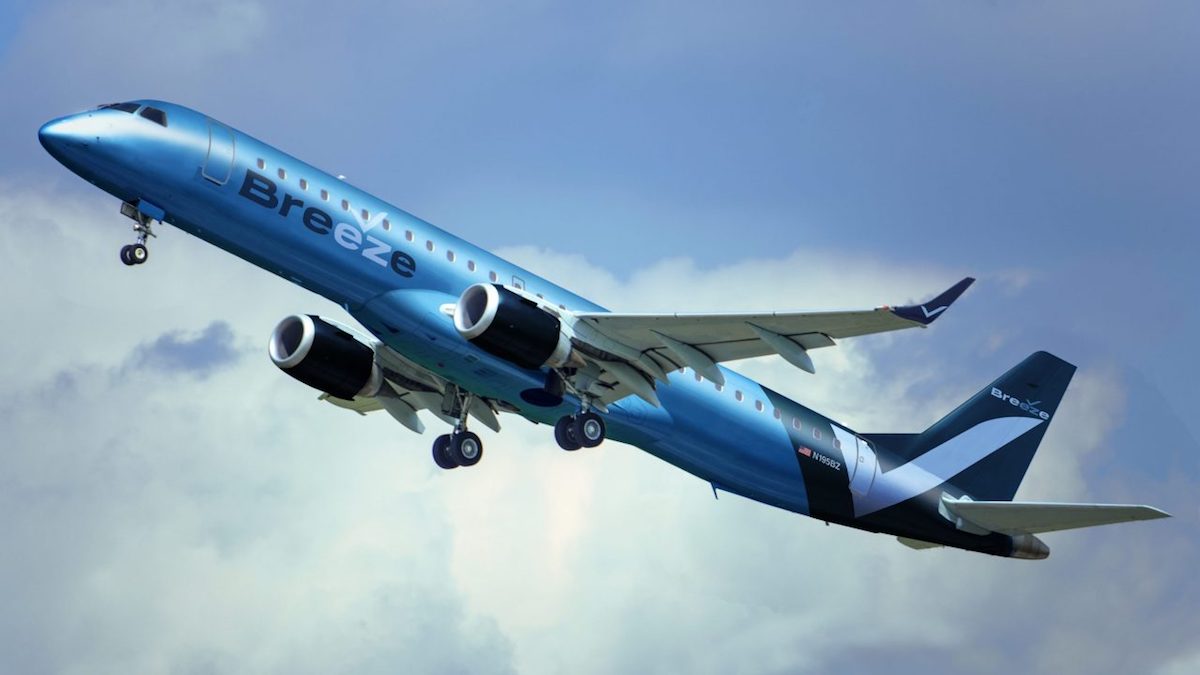 In many ways the US aviation market was already crowded before coronavirus, so what will make Breeze Airways different?

On the most basic level, Breeze Airways plans to operate point-to-point flights between markets that the airline considers to be underserved. This would include mid-size city pairs with no current nonstop flights, and it would also include flying into & out of secondary airports in regions. As Neeleman describes it:

“Breeze will fly nonstop service between places currently without meaningful or affordable service.”

In other words, it sounds like Breeze’s plan is to take a similar approach to route planning as Allegiant, except to offer a better experience.

Historically point-to-point leisure flying was a very different business model than what you found at legacy airlines. However, with business travel having dried up, we’re seeing the “big three” US carriers also launch endless point-to-point leisure routes that they would have never previously considered. This seems to at least somewhat reduce Breeze’s competitive edge.

Neeleman also says that Breeze Airways will be “the world’s nicest airline.” That’s a big statement to make, so we’ll see how that goes.

Interestingly Breeze is only one of two major new US airline startups, with the other one being Avelo Airlines, founded by a former Allegiant Travel United Airlines executive. That airline has a similar business model in terms of the routes it will fly, with one major difference — Avelo will be using older planes, and will be focused on providing extremely inexpensive and basic transportation.

As far as Breeze Airways’ passenger experience goes, the airline plans to be a low cost carrier with a twist:

Breeze Airways says it aims to be the world’s nicest airline, which many would argue doesn’t really mix well with the carrier’s hiring practices, which have caused quite a bit of controversy:

So yeah, I’m curious to see how this works out for the airline. On the one hand, Neeleman has built airlines with good cultures. On the other hand, some of these practices seem highly questionable.

Neeleman has done a fantastic job with the airlines he has founded, so as consumers we should be excited about Breeze Airways. He is promising the world’s nicest airline, and in the past he has done a good job building companies with great cultures. I have some concerns about Breeze’s approach to hiring, though only time will tell how that works out.

Hopefully within the next several weeks Breeze starts operations, first with Embraer aircraft, and then with Airbus A220s starting in August 2021. I’m looking forward to seeing Breeze’s route network, A220 premium product, and fare structure.

The 11 best deals in miles and points