Crete, Greece’s largest island, has been a popular mass tourism destination for decades. It’s home to big all-inclusive holiday resorts with sunbeds and umbrellas lining beautiful beaches, as well as long coach queues beside world-known archaeological sites like Knossos. Beyond this touristic surface, though, Crete hides a secret series of small islands and islets. Gavdos is the most unique of them all, located below Crete in the Libyan Sea — looking due south to Africa. It is not only the southernmost Greek island and the southernmost tip of Greece but is also widely accepted as Europe’s southernmost point, despite southern points in Cyprus and Madeira also claiming this title.

Known as Ogygia in ancient Greek mythology, the island on which the nymph Calypso held Ulysses hostage, Gavdos’ reputation remains mythical for those searching to get away from civilization, forget time, and connect with unspoiled nature. If you are dreaming of swimming naked in crystal clear waters and sleeping under the star-dusted sky on some of the best beaches in the world, Gavdos is your destination. Here’s how to plan a trip to Gavdos.

How to get to and move around Gavdos 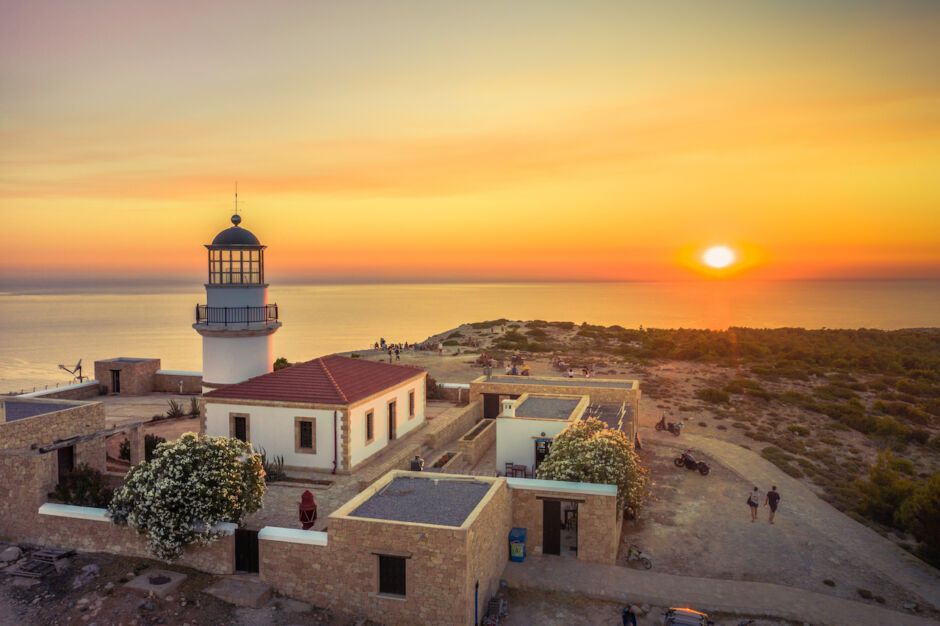 May to September is the best time to visit the island. Although Gavdos is still off the beaten track, do not expect to find only its 150 registered residents there during the high peak summer season. It gets especially busy between mid-July to late August, with over 3,000 campers visiting the island over the course of the summer. To get there you can catch a ferry from the ports of Sfakia or Palaiochora in the Chania region and arrive at Gavdos’ port, Karave, in two or four hours, respectively. The trip costs about $15 per person. You can also hop on the ferry at the smaller ports of Agia Roumeli, Sougia, or Loutro. If you want to get there in just an hour but with limited space for luggage and no ability to carry any vehicles, choose the speedboat from Sfakia. The speedboat is weather dependent so be prepared for a bumpy ride if it’s windy. Even better, call the company before traveling to make sure that the boat is sailing that day.

You could take a car or other vehicle with you as there are a couple of paved roads connecting the main locations of the island, but you don’t really need it. Two public buses run a few times a day and apart from taking you around the island, they are the best way to meet other like-minded travelers as well as the island’s two iconic bus drivers.

The island hosts free camping and a nudist paradise 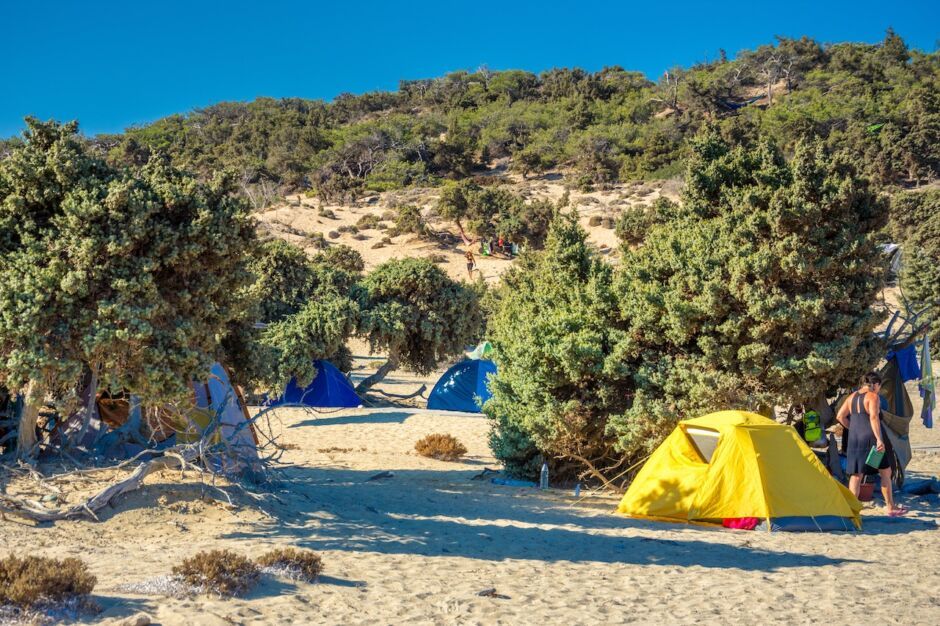 Despite being prohibited by Greek law, Gavdos hosts many free camping areas. From the port of Karave, you can head to the Sarakiniko or Ai Giannis beaches, the two most popular free camping locations. Sarakiniko is a long sandy beach and it is a good location to stay as you can find the majority of the island’s amenities by the beachfront, including cafes, tavernas, a bakery, and a mini-market, as well as toilets and outdoor showers. Many tavernas host free live music throughout the week and you can also enjoy concerts and open-air cinema for free in Sarakiniko’s small open-air theatre. If Sarakiniko’s culinary options do not cater to your taste, try the tavernas and bakeries with local products in Kastri, the island’s capital situated almost at the center of the island.

If you plan to camp, here’s a list of everything you will need.

On the western side of Sarakiniko, Ai Giannis beach is the choice of most free campers. Ai Giannis’ unique landscape of sand dunes and cedar trees have earned it multiple honors among the world’s most beautiful beaches. The whole island of Gavdos has been declared a “protected area of natural importance” under the European Commission’s network Natura 2000. If you are not keen on the idea of free camping, several rooms to rent are available around the island, just make sure to book early as they tend to fill up.

Embracing the island’s spirit, you can spend most of your stay in Gavdos naked by the beach or in the turquoise clear sea. Nudism is the norm rather than the exception on all of the island’s beaches. Even if nudism is not your thing, remember that this is primarily an island where freedom and acceptance are of paramount importance — and beachwear is of course welcome, too.

Trekking on Gavdos and visiting the southernmost point of Europe 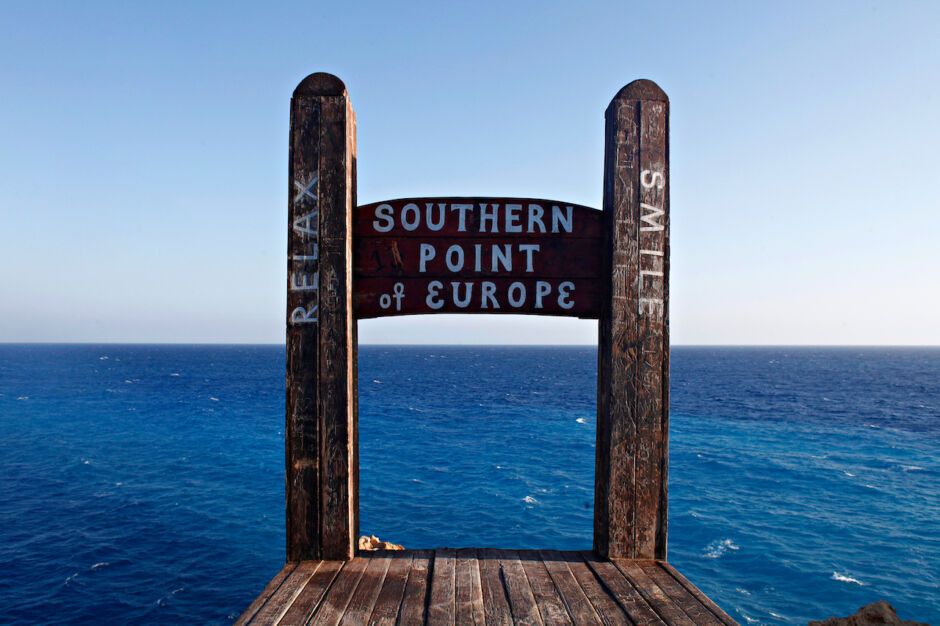 Some of the island’s other famous beaches and wild beauty can only be reached on foot. From the sleepy settlement of Ampelos, a well-signposted albeit challenging trekking path ends at a series of steep steps that will lead you to the beach Potamos, taking around an hour and a half. If you want to avoid the hot sun, start early in the morning and bring food and water supplies with you as once on the beach there is nothing but the sea and a few hardcore free campers that give the place a bit of a “Castaway” vibe. You will feel like you’ve just reached the end of the world. Time your return to Ampelos to catch the bus that stops at the Lighthouse, a Gavdos landmark from 1880, just on time to explore its interior and climb all the way to the top to be rewarded with a view of the endless sea before you enjoy a magical sunset at the wooden chairs by the rocky outside area.

Another beautiful trekking path through abandoned stone houses starts from Vatsiana village, Europe’s southernmost settlement, and leads to the beach of Trypiti after about an hour. This is an easy and pleasant path but again be prepared for the hot sun and the lack of amenities on the way or once you are at the beach. At the right edge of Trypiti Beach is a rocky natural formation with three arches on top of which stands the most famous and unexpected landmark of Gavdos: a huge chair several times bigger than the average human that designates that you have arrived at Europe’s southernmost point.

The chair was placed there by a group of Russian physicists that arrived on the island in 1997. Since their arrival, the group has become notorious for their philosophical search for human immortality as expressed via their organization the Pythagorean Institute of Philosophical Studies for the Immortality of Man. You cannot leave Gavdos without taking a photo on top of the iconic chair, taking a moment to rest your eyes on the unobstructed view of the Libyan Sea. However, take extra care climbing the uneven rocks to get there — particularly if you suffer from vertigo. On your return from Trypiti, you can explore a different one-hour path towards Korfos through a beautiful pine forest which is a pleasant surprise on a primarily dry island. Reward yourself for the day’s trekking with some fresh fish at one of the tavernas in Korfos. For the best sea view, go for the taverna ‘Panorama’ at the highest point of the settlement.

Preparation for relaxation on Gavdos at Europe’s southernmost point 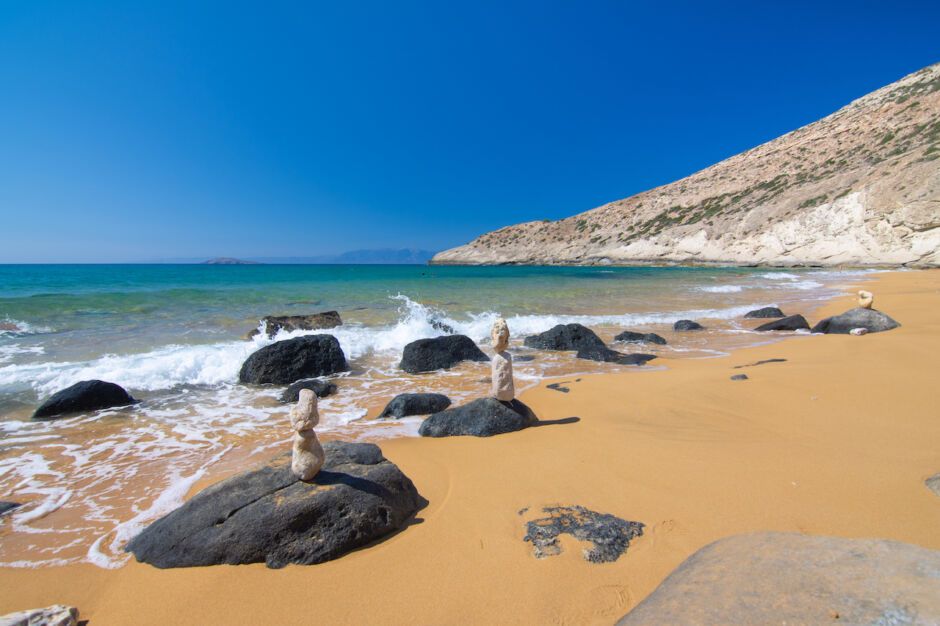 Gavdos is an island where time slows down and civilization stays behind. As such, you should do the same. This is an island of relaxation. Stay for more than a week if you can and come prepared to avoid disappointment. Most places will nowadays accept credit cards but there is only one ATM on the island and it often has no money in it to withdraw. Bring enough cash for the duration of your trip.

Remember to include in your backpack some basic medicine and first aid. And although you can charge your mobile in the cafes and tavernas it is very likely that it will run out of battery at some point if you opt to camp, so a power bank might be essential along with the rest of the gear in Matador’s guide to all the gear you need to backpack through Europe. Crete is not that far and there is a heliport for emergencies, but like most isolated Greek islands there can be issues with food supplies, electricity, and water depending on the weather. But fear not. Gavdos is not just an island, it is a way of life, and experiencing Europe’s southernmost point will reward you in ways the rest of Greece can’t (and not just because of the nude camping).