THE DRINKS AT MISS VOON come with a view, a stunning panorama of twinkling lights fading into the vast darkness of Swedish Lapland.

The deep reds of this rooftop Asian bistro seem the ideal environment for a menu of Japanese whiskey cocktails and artfully sliced sashimi. But in addition to the usual aroma of faint soy and muted seafood, this sushi den has distinct wooden notes, like someone stuck a Japanese restaurant inside a Nordic sauna.

That’s because Miss Voon isn’t just any swanky hotel rooftop bar. It’s the rooftop bar at the Wood Hotel in Skelleftea, Sweden, a landmark, 20-story testament to sustainable architecture, constructed almost completely from local timber. And it just might be the most intriguing new building in all of Europe.

The Wood Hotel is revolutionary in both aesthetics and sustainability

The Wood Hotel by Elite sits in downtown Skelleftea, a northern Sweden mining town that’s adapting into a hub for renewable energy. Northvolt, who manufactures batteries for electric cars, has opened a facility in the area. The entire town runs on renewable power. But the most eye-catching advancement is the light wood downtown tower that’s pioneering sustainable hospitality. 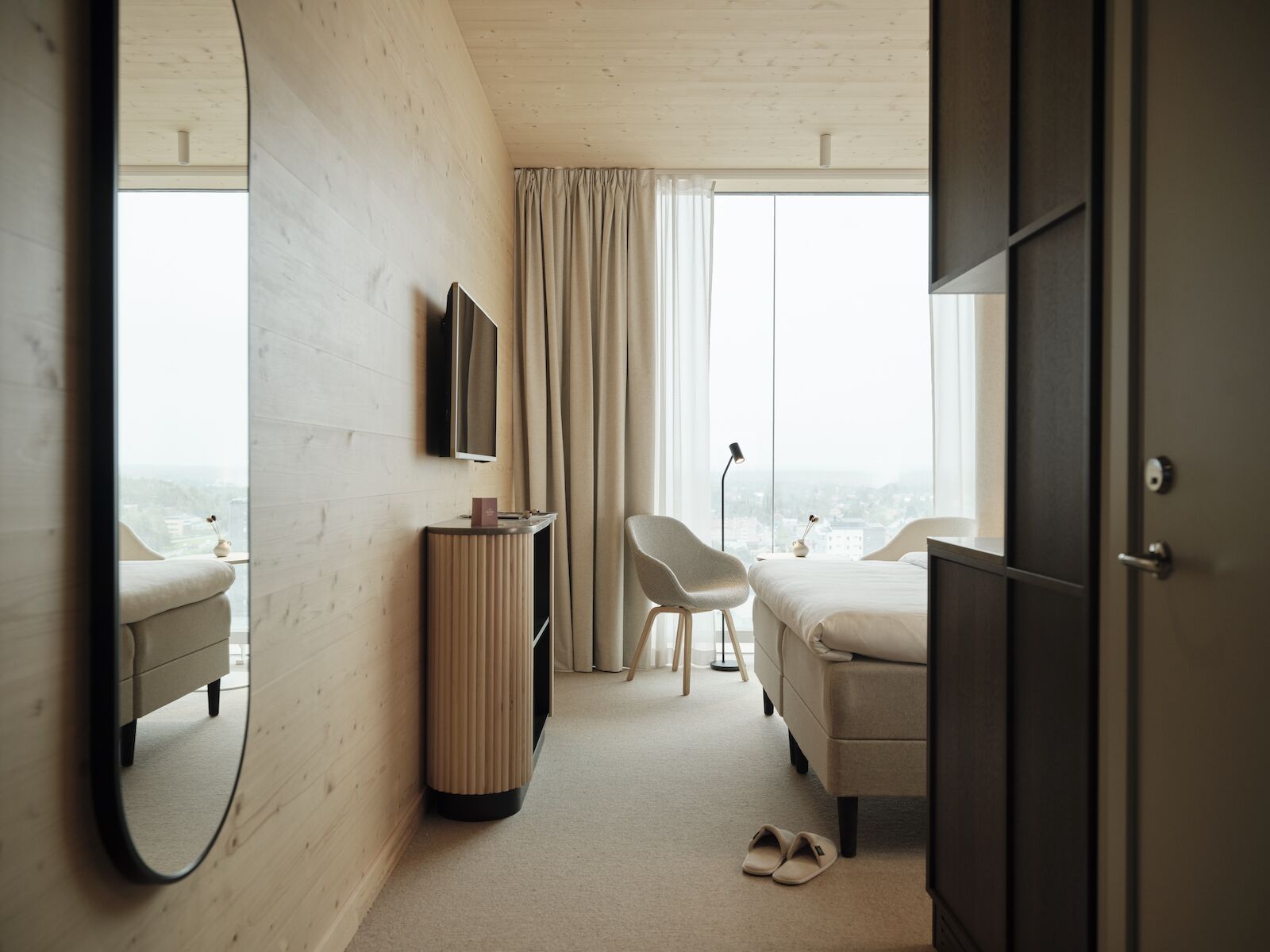 The 205-room hotel is constructed of glulam, i.e. glued-laminated timber, and cross-laminated timber beams, most of which are sourced from trees within about 40 miles (the trees are all replanted). But the Wood hotel has sacrificed nothing in terms of amenities to reach its sustainable end. There’s a large gym and a luxe spa, a rooftop bar and three full-service restaurants. The flat screen TVs in the rooms let you log into your Netflix. And the complimentary breakfast spread could put some Vegas buffets to shame.

The first four floors also house the Sara Cultural Centre, with seven performance spaces, an art gallery, a photo gallery, and a public library in the lobby. 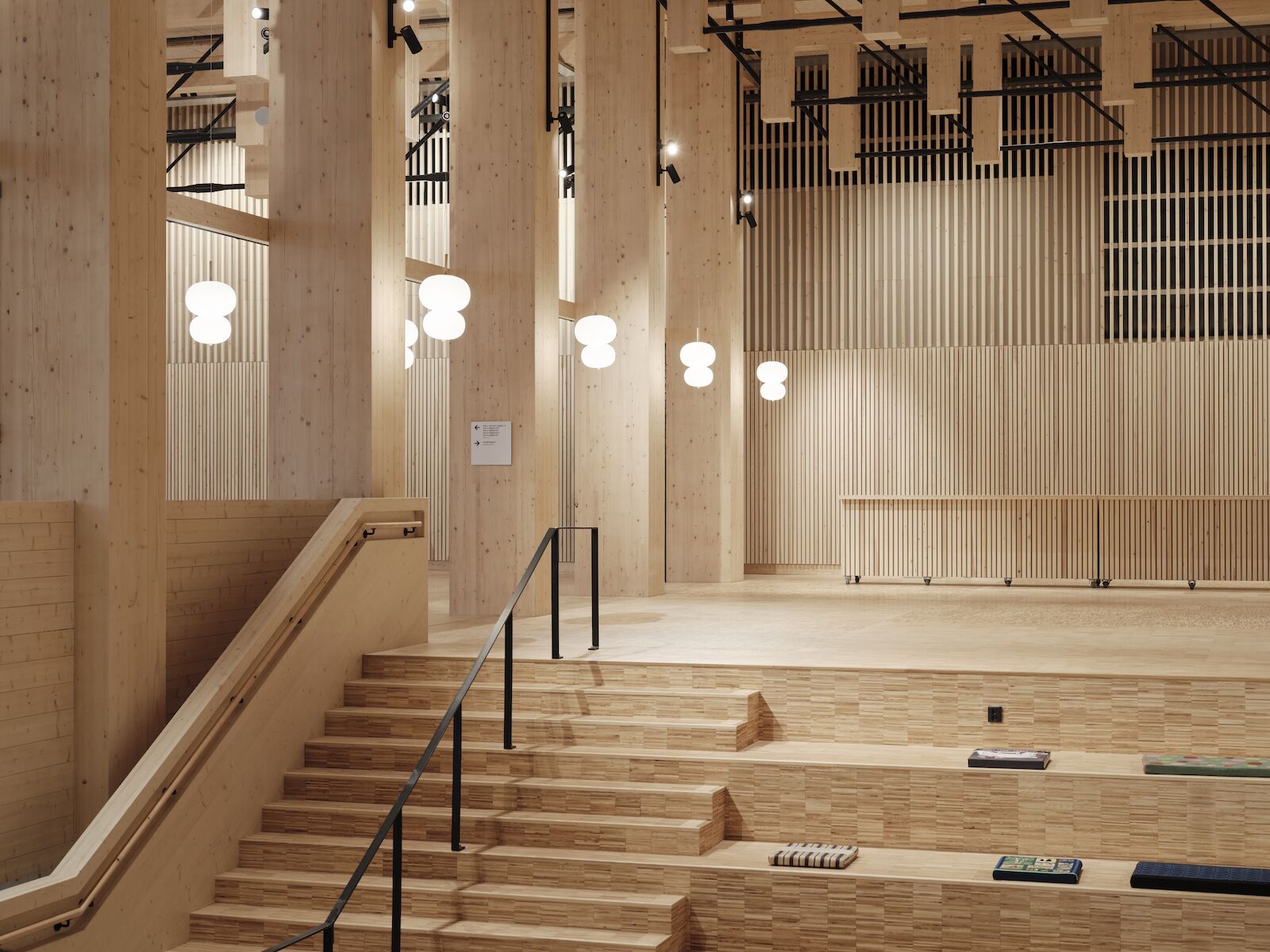 The cultural center’s crown jewel is its 1,200-seat main theater, a multi-level performing arts hall constructed completely of wood, including the sound-absorbing acoustical panels. Standing on the top level, it feels a little like someone went to Ikea and decided to build the Vienna Opera House. 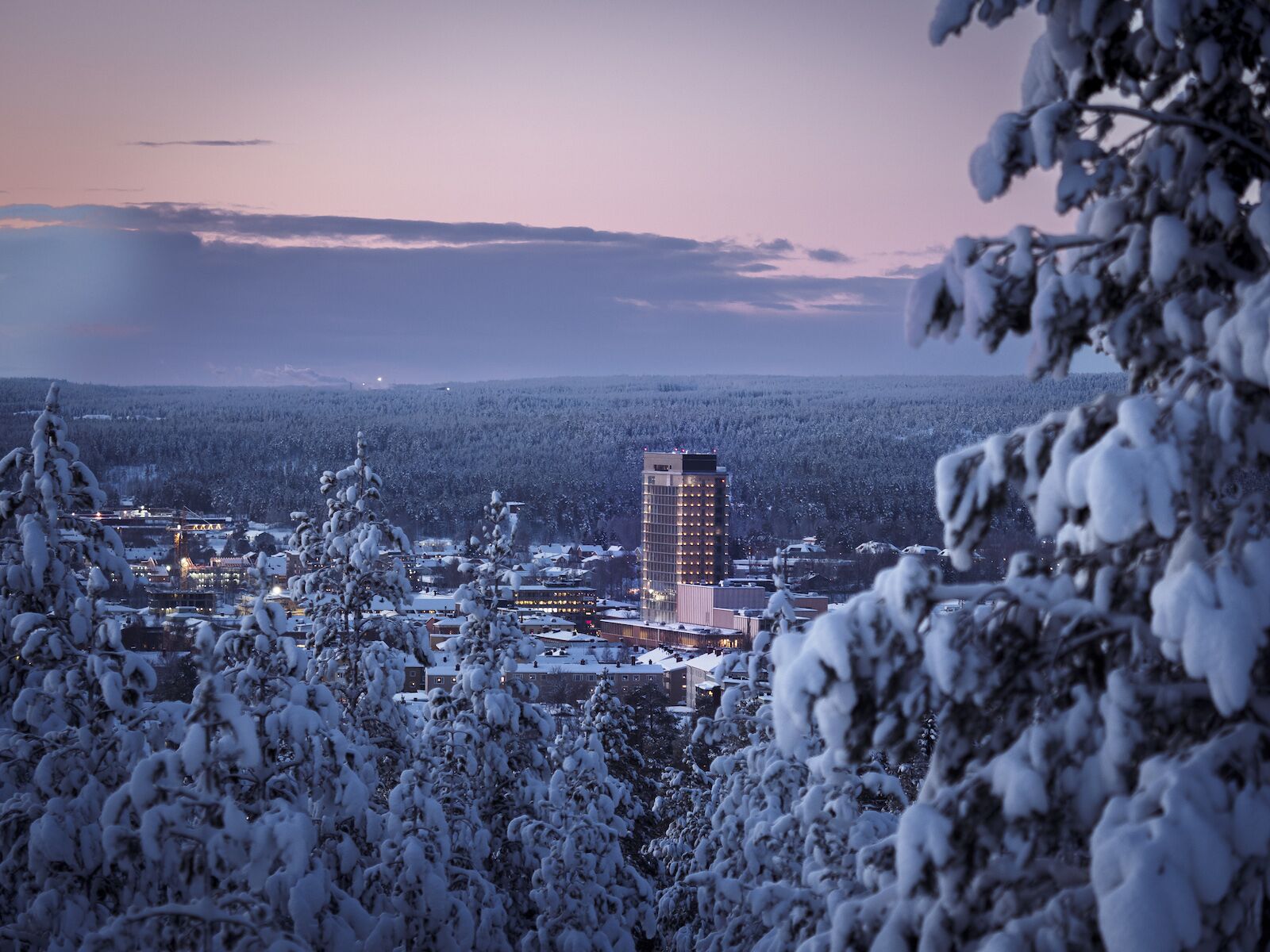 Skelleftea’s story is a familiar one, a gritty mining and timber town that fell on hard times as those industries waned. Young people began to leave in droves, and the city needed something to reinvent itself in a post-industrial era. They found it in the form of renewable energy, but needed a signature destination to show the world it was back on the cutting edge.

“The city needed an attraction to make the city center more attractive, part of a strategy to grow from 70,000 to 100,000 over the next 10 years,” says Robert Schmitz, the lead architect on the Wood Hotel. “They said, ‘We want to create a new landmark for the city.’”

To reach this end, Skelleftea held an open competition for architects to design this ambitious project. Timber was not a prerequisite, it just needed to be something that would be unlike anything in the country.

They received 55 entries from 11 countries, but Schmitz and his team had a standout idea. They wanted to create a novel building filled with both cultural and environmental sustainability, making wood an obvious choice.

“With timber surrounding Skelleftea, and the university having timber courses, we thought if a developer had the guts to do this, and design a building of this size of timber, it should be in Skelleftea,” Schmitz says.

The building process put the construction sites of steel and concrete buildings to shame. The hotel was built as separate wooden modules offsite, then delivered to the main site and stacked like shipping containers. Crews added a story every other day, and reduced the frequency of carbon-spewing trucks to almost nil.

The hotel itself absorbs carbon from the atmosphere, as the exposed wood respirates with the air outside. The hotel’s roof solar panels can share extra energy with buildings nearby, and it also uses AI to predict exactly how much heat the building will need.

“Timber is the only renewable construction material we have,” Schmitz says. “And we wanted to use [that resource] to inspire the architecture.”

So how does the Wood Hotel stand up exactly?

If we learned anything from The Three Little Pigs it’s that wood is not nearly as reliable as bricks when the Big Bad Wolf — or a raging winter storm — comes a blowing. So architects had to design the Wood Hotel to be just as strong as steel and concrete.

They achieved this end by using the combination of glulam and CLT. Glulam is essentially laminated stacks of beams, with the grains all running the same way. This allows it to act as a better load-bearing material than steel, pound-for-pound. CLT has beams connected at 90-degree angles, giving it better stability over wide areas like walls and flooring.

The hotel is built around two main cores, one on each end, that are both exposed and visible through the double-paned glass walls outside. Those double panes make the hotel far more energy efficient, as warm air stays between the panes in the winter, insulating everything inside.

“We decided the highrise should partly be reflecting the Nordic sky, but should showcase the timber within so you can see how it was constructed,” says Schmitz. “The blurring of inside and outside takes place on the streetscape, and we can extend our public space.”

The hotel’s not without any metal, though. Generators and heating/cooling units on the fifth and sixth floors are supported by a steel truss. There’s also concrete atop the hotel to minimize sway. But for the most part, the Wood Hotel is a marvel of white wood and forest aromas, like living in a life-sized doll house designed for the 2020s.

On a cold, winter weeknight all three of the Wood Hotel’s restaurants are packed, with smiling diners inside Paolo’s on the ground floor slurping wine and pasta much to the envy of chilly pedestrians outside. A couple of floors up at Mandel, the spirit of sustainability extends to the menu, filled with food items sourced from the region. The scene at Miss Voon on the rooftop could have been ripped from Manhattan, where an attractive crowd passes sushi plates past brightly-colored martini glasses under the dark red wooden beams. 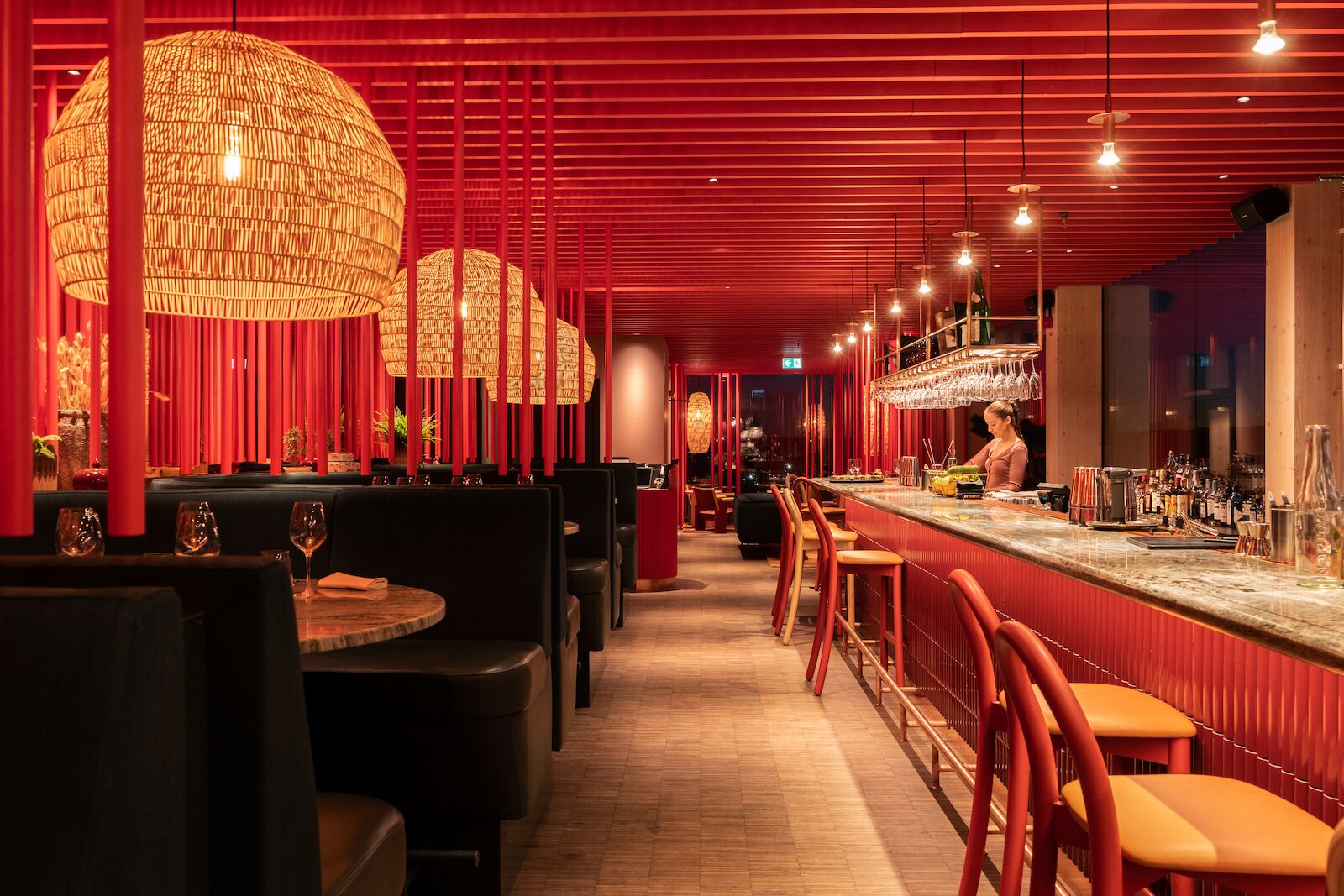 “We’ve had a start that nobody would believe,” says Wood Hotel General Manager David Aberg. “We’ve had lines at the restaurants, fully booked every day. We didn’t expect the kind of flood that we’ve had.”

Aberg says most of his guests have come from northern Sweden, curious about his brave new building that’s caught the world’s attention. But he’s confident that the Wood Hotel can turn into a real tourist attraction, bringing visitors on their way to Norway or Swedish Lapland who want a stop in a unique location.

The hotel has been almost full since it opened in mid-October, Aberg says, and reservations haven’t fallen off even as new COVID-19 restrictions took effect. For now, the novelty of the Wood Hotel is still as fresh as the woodsy smell that permeates the place. And once-struggling Skelleftea has found its signature landmark.