THE JOY OF scooping up mouthfuls of creamy tomato curry and bites of tender chicken using torn bits of naan is what keeps many Westerners returning to their local Indian restaurants. Britons and Americans have a mutual love for two dishes that fit the bill: chicken tikka masala and butter chicken, though many diners would be hard-pressed to describe the difference. Some might insist that they’re interchangeable; others might wonder why both are listed on a single restaurant menu.

Though butter chicken and chicken tikka masala are similar in both preparation and flavor, each has a unique history and its own subtle characteristics. To better appreciate the dishes you’re most likely already ordering, no matter which one you favor, here’s everything you need to know about chicken tikka masala and butter chicken, from where each comes from to how they differ.

The origins of butter chicken and chicken tikka masala 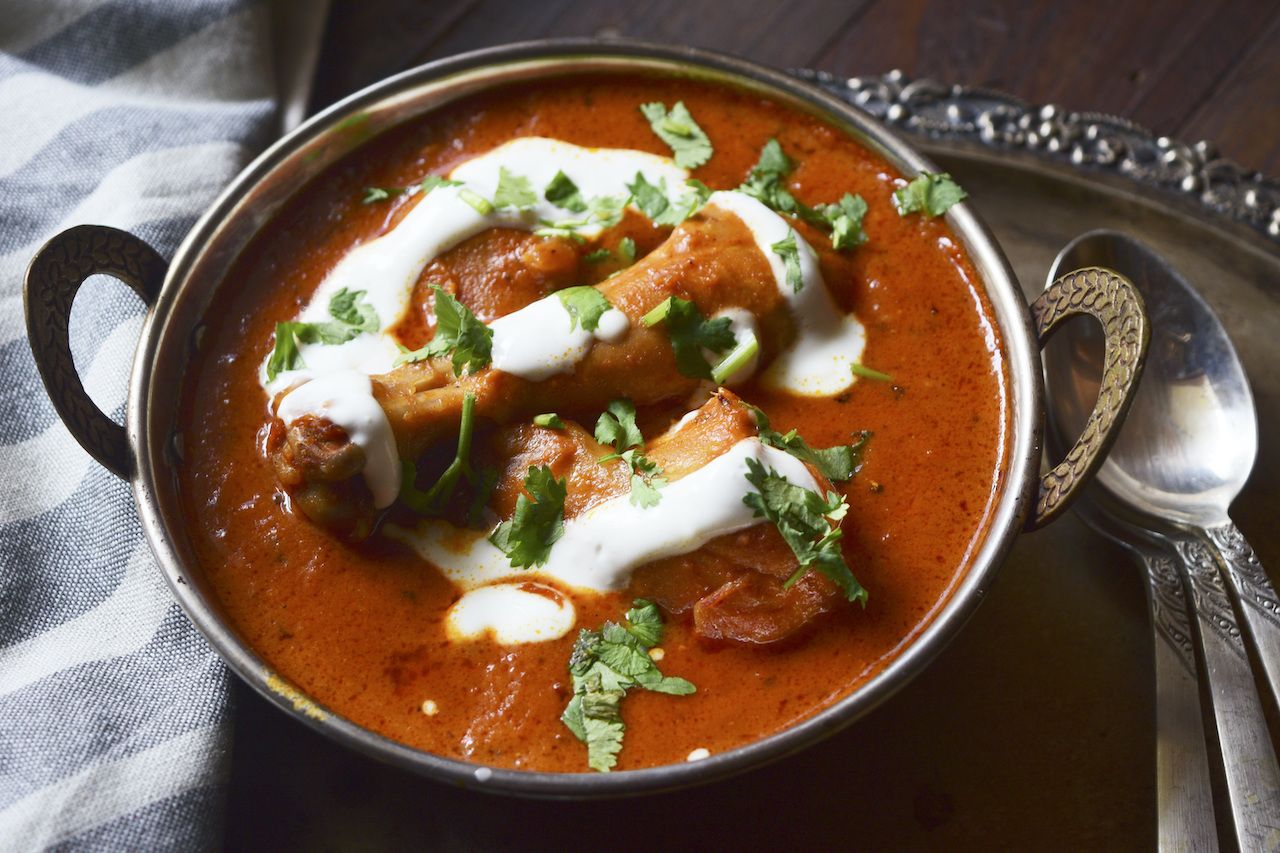 Understanding the difference between butter chicken and chicken tikka masala begins with understanding their origins. By all accounts, butter chicken, or murgh makhani, came first. It’s widely accepted that a Pakistani refugee named Kundan Lal Gujral popularized the North Indian dish, first serving it at his restaurant in Delhi in the 1950s. Gujral is also credited with popularizing tandoori chicken, which is marinated in yogurt and spices before being cooked in a clay oven called a tandoor that was traditionally used to bake flatbread. How Gujral came to start serving tandoori chicken in a rich, buttery tomato-cream sauce is unclear. Some say the dish was a happy accident. Others assume it was a means of repurposing leftover chicken.

Even less is clear about the origin of chicken tikka masala. The dish is generally accepted as a derivation of butter chicken, but little about its history is universally agreed upon. Central to the debate is whether the dish can be considered Indian at all, or if it’s actually British.

One of the most popular legends surrounding chicken tikka masala attributes it to a Bangladeshi chef in a curry shop in Glasgow, Scotland, around 1970. As the story goes, the chef whipped up an impromptu batch of spiced tomato gravy to serve over chicken that a customer had complained was dry. In some versions, the chef is anonymous, and the gravy began as a can of Campbell’s tomato soup. Others identify the chef as Ali Ahmed Aslam, owner of the Shish Mahal restaurant, who takes credit for inventing the recipe and even petitioned the EU to recognize chicken tikka masala as a Glaswegian dish, much as Champagne and Parmigianno Regianno have a Protected Designation of Origin status.

Another theory traces the dish back to British India where British soldiers were served chicken in a creamy tomato gravy to tone down the spice. Even the story behind the boneless, bite-sized pieces of meat that are characteristic of chicken tikka masala is disputed. Many believe that the first Mughal emperor originated the poultry’s trademark preparation, owing to his insistence that he only be served deboned chicken in fear of choking.

For the British, chicken tikka masala’s origins are not only historically hazy but also controversial. In 2001, then British Foreign Secretary Robin Cook gave an infamous 2001 speech on the value of the nation’s multiculturalism, spotlighting the dish as an example.

“Chicken tikka masala is now a true British national dish, not only because it is the most popular, but because it is a perfect illustration of the way Britain absorbs and adapts external influences,” Cook claimed, garnering considerable criticism. “Chicken tikka is an Indian dish. The masala sauce was added to satisfy the desire of British people to have their meat served in gravy.”

Perhaps author Lizzie Collingham presents the dissenting opinion best in her book, Curry: A Tale of Cooks and Conquerers, when she writes that chicken tikka masala “was not a shining example of British multiculturalism but a demonstration of the British faculty for reducing all foreign foods to their most unappetizing and inedible forms.” Other critics, such as restaurateur Iqbal Wahhab in an article for The Independent, questioned the entire institution of British Indian restaurants as being inauthentically multicultural at best, and colonial at worst.

The question of where chicken tikka masala originated invites more questions than answers. What is clear is that despite the dish’s popularity in the US and particularly in the UK, where it’s said to make up one in seven curry sales, travelers would be hard-pressed to find chicken tikka masala on many restaurant menus in India. The same can’t be said for murgh makhani.

The difference between butter chicken and chicken tikka masala 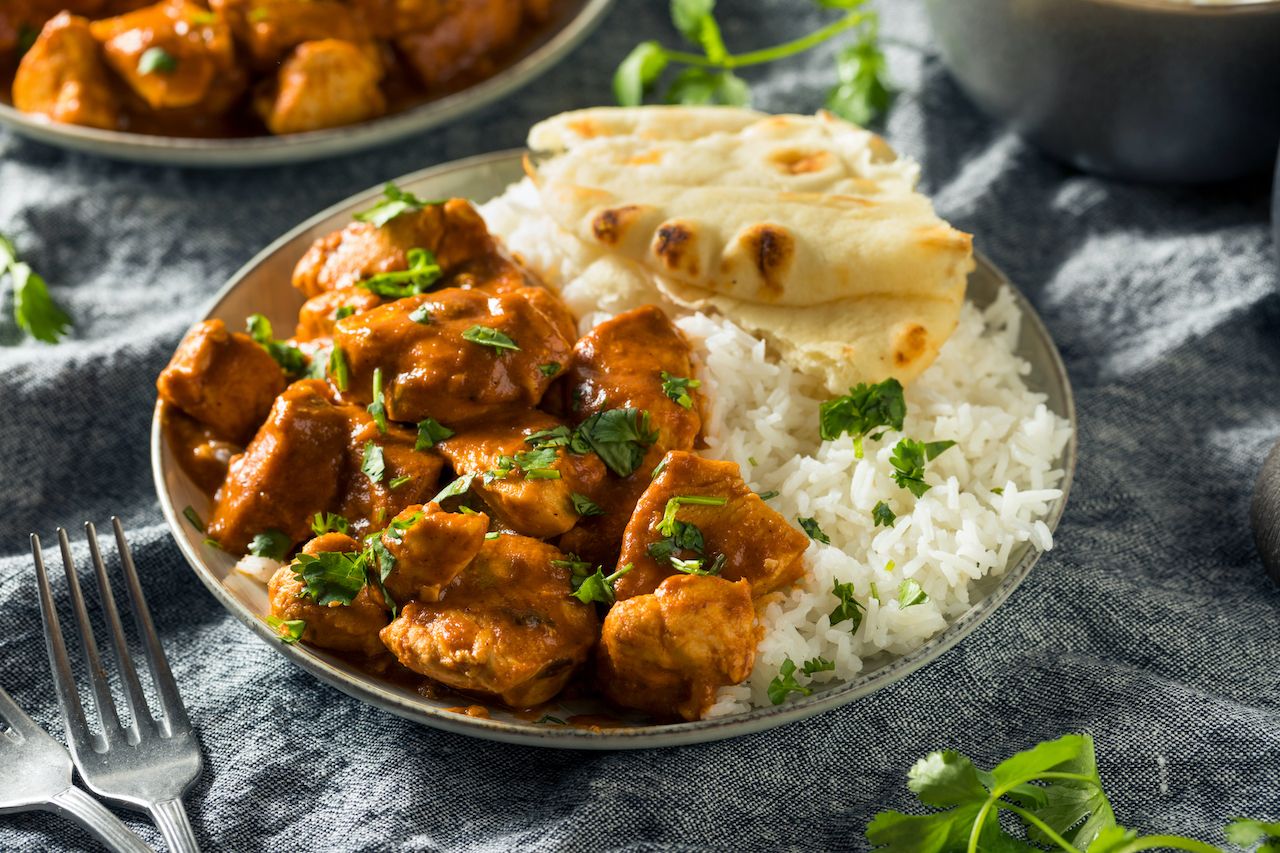 Origins aside, what actually differentiates butter chicken and chicken tikka masala is subtle. Exactly how either dish is made largely depends on who’s making it, although the foundation is the same: pieces of chicken swimming in a spiced, aromatic, velvety tomato curry.

One common, if somewhat pedantic, way of differentiating the dishes is to say that butter chicken is served in a creamy tomato sauce while chicken tikka masala is slathered in a creamy tomato gravy. The former is considered creamier, owing to the butter or ghee that’s often incorporated, while the latter is thought to be more tomato-y. Others say chicken tikka masala is more flavor-forward, though both dishes are loaded with aromatics like garlic, ginger, and chili, as well as spices like cumin, coriander, cardamom, black pepper, cinnamon, and cloves, which often come pre-blended in a spice mixture known as garam masala. Turmeric, fenugreek, and nutmeg are also commonly used in both dishes.

Where to try butter chicken in India

While butter chicken is available on restaurant menus globally, it goes without saying that nowhere makes murgh makhani like India. The restaurant in Delhi where chef Gujral popularized the dish, Moti Mahal, is now a franchise with many locations in India and around the world, including several restaurants in New Delhi, Ghaziabad, Noida, and Gurugram in the National Capital Region, plus dozens more across the states of Gujarat, Kashmir, Uttarakhand, Uttar Pradesh, Punjab, Odisha, West Bengal, Assam, and others. Internationally, the franchise has locations in Sri Lanka, New York, the Maldives, and New Zealand.

Where to try chicken tikka masala in the UK

The restaurant where chef Aslam claims to have invented chicken tikka masala, Shish Mahal, is still operating in the Kelvinbridge area of Glasgow’s trendy West End. If you’re traveling around London, Brick Lane in East London is jam-packed with curry houses that are said to serve some of the best Indian food in England. Aladin Indian Restaurant is among the most raved about

10 Places to Visit in Spain (That Aren’t Barcelona)

This Fall U.S. Airports Are Getting 50 New Lounges, Each The Size Of A Phone Booth