Now reading: The balmy Isles of Scilly are England, but with soft sand and palm trees
Share
PrevNext

AT THE SOUTHWESTERN TIP of England, the cliffs of Land’s End appear to be where the county of Cornwall ends. In fact, 28 miles due west lie a group of islands with gin clear water, sandy beaches, hidden coves, and balmy breezes. Located far enough into the Atlantic to benefit from the warming effects of the Gulf Stream current, even palms and tropical pandanus trees grow here.

With 55 islands and islets to explore, most uninhabited, there’s a beach for everyone. From a castle to an array of traditional pubs and winding country lanes, the Isles of Scilly offer a solid slice of Englishness — history, scenery, architecture, and food — in a small, easy-to-navigate area.

Where to base yourself in Scilly 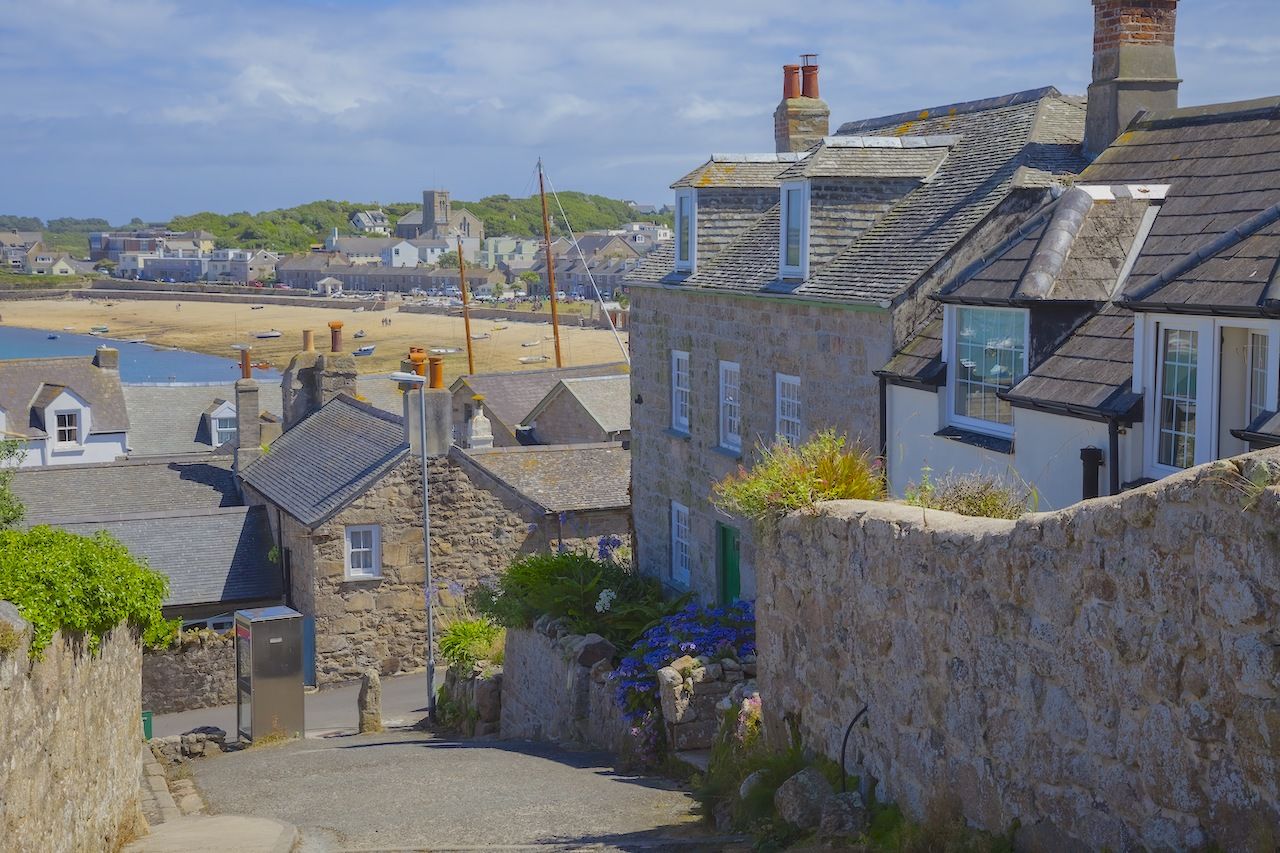 The main population hub is Hugh Town on the largest island, St Mary’s. This is where you’ll find most accommodations, pubs, and eateries. And forget having to rent a car to get around. It’s bikes, golf carts, and horses. Sure, the horse trek is kept to the beaches and coastline around St Mary’s — basically your ultimate off-road “vehicle” — but the golf carts are pimped for legal road use (available through the wonderfully named Scilly Cart Co.) and the bikes and e-bikes beat walking.

If you’re looking for a place to stay on the island there are plenty of choices, from Star Castle, a 16th Century fort turned hotel, to cottages to lodges. Whether you want to stay near the harbor with eateries and boat transfers just minutes away, a headland with sweeping ocean views, or a quiet guesthouse away from the main town, you’re spoiled for choice.

The easiest way to get to these islands off the tip of Cornwall is by plane. You can travel on the Isles of Scilly Skybus from the southwest of England, with the flight from Exeter taking one hour, while Newquay in Cornwall takes 30 minutes. Or you could depart from Land’s End, at the edge of the Cornwall peninsula, for a 20-minute flight.

Alternatively, you can catch a ferry, which takes two hours 45 minutes, from Penzance Harbour in Cornwall. Or, more daringly and expensively, you could charter a helicopter from Penzance (15 minutes) or chopper in from London for the two-hour flight. 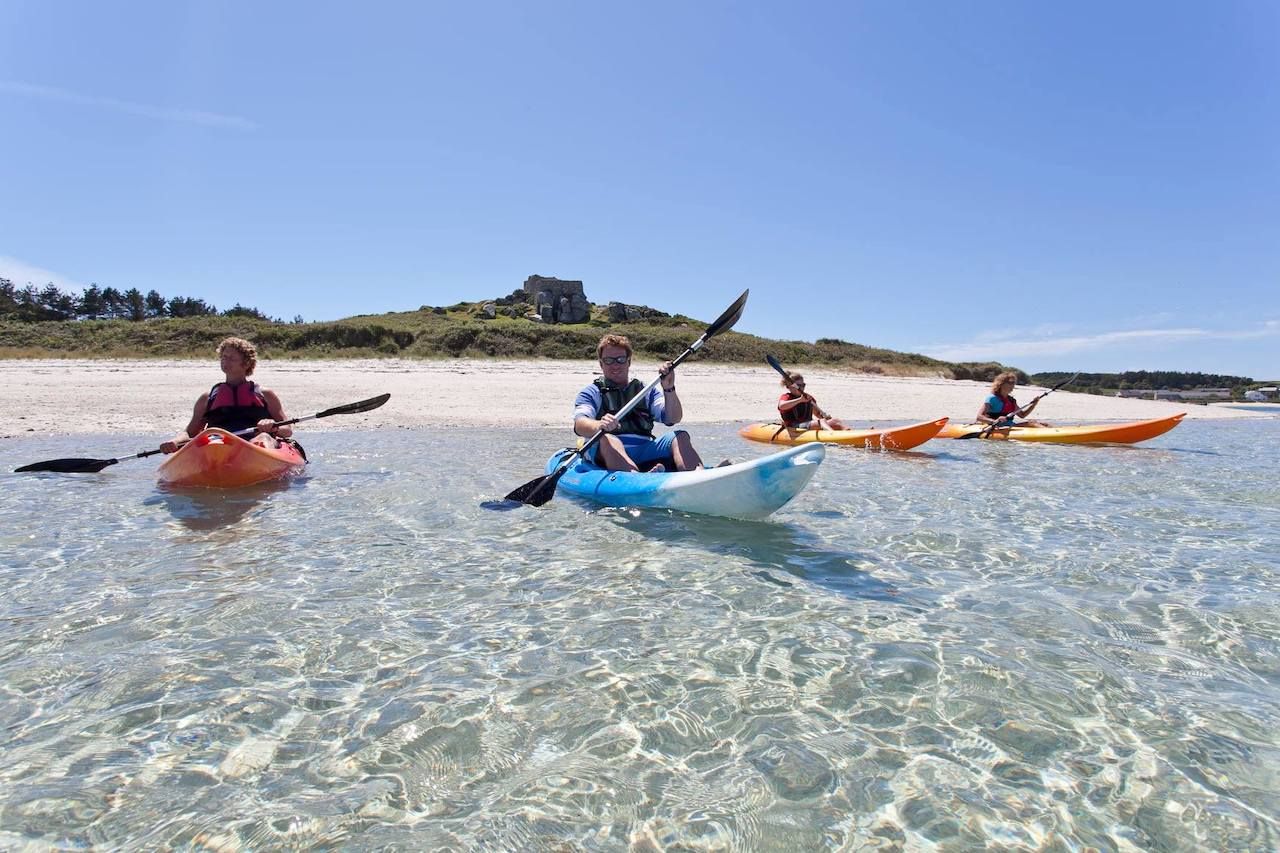 While being sunny and sandy, the Isles don’t lend themselves to lounging in a beach chair and snoozing. I mean sure, you could do that, but you’d be missing out on so much — such as the boat trips around St Mary’s that focus on wildlife, history, and fishing. The boats also do inter-island transfers, making it easy to do a day-trip to one of the other islands. You just need to turn up at the quay (harbor), as boats are coming and going throughout the day.

For a simpler way to enjoy the waters around St Mary’s you can go self-propelled on a standup paddle board or kayak, which you can rent for £15 ($20) per hour or £50 ($69) for the day. And if the seas are calm and clear, which is most of the time in summer, be sure to grab one of the clear SUPs (which are closer to $25 per hour) so you can see the wildlife as you float around. If the wind’s up, take sailing or windsurfing lessons.

If you’re after something a bit more active the Kernow Coasteering crew are the people to adventure with. Coasteering is a creative sport that started just north of the Isles in Wales. Don a wetsuit and helmet, bring your sense of adventure and you’ll be crawling through gullies, scrambling over boulders, and jumping off rock platforms into the sea. It’s a great excuse to act like a kid again. Highly recommended. 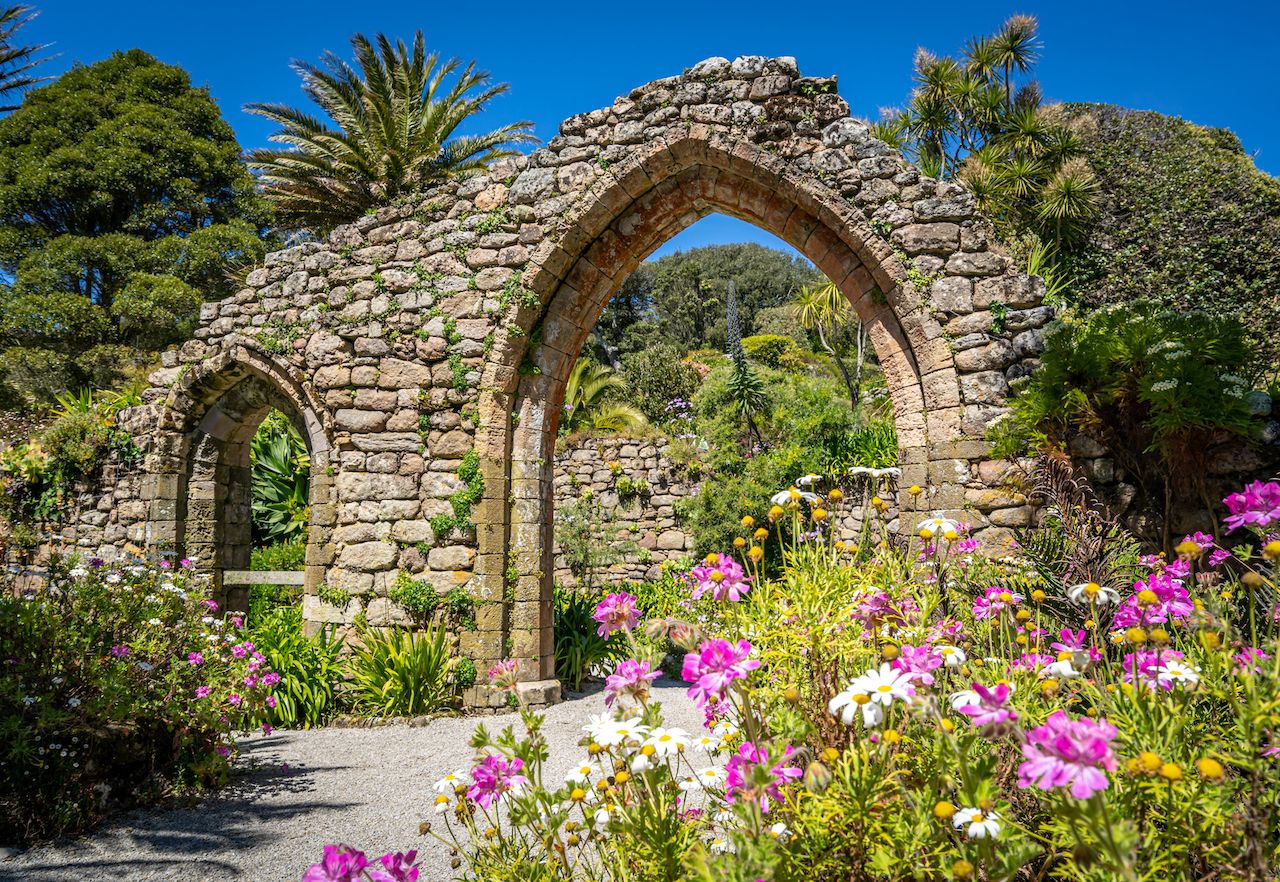 Though the islands occasionally bear the brunt of Atlantic-born storms in winter, they rarely get frost or snow. That warmer climate means that a variety of plants native to mild climates can thrive there, which they do at the Tresco Abbey Garden. Created nearly 200 years ago on the ruins of an old abbey, the garden is home to plants from over 80 countries as distant as New Zealand and Brazil.

Because the Isles of Scilly jut so far out into the Atlantic Ocean, they get their share of migrating birds that don’t reach the larger British Isles — making birding a popular activity here. Nearly 450 different species have been recorded there, and you can check the Isles of Scilly Bird Group for rare bird sightings.

By night, the island is also perfect for stargazing. With no light pollution the night skies are some of the darkest in the UK. And the long, low, and unobstructed views to the horizon offer a fantastic sightline to see more – notably planets. The skies are so dark the islands host an annual Dark Sky Week the first week of October. 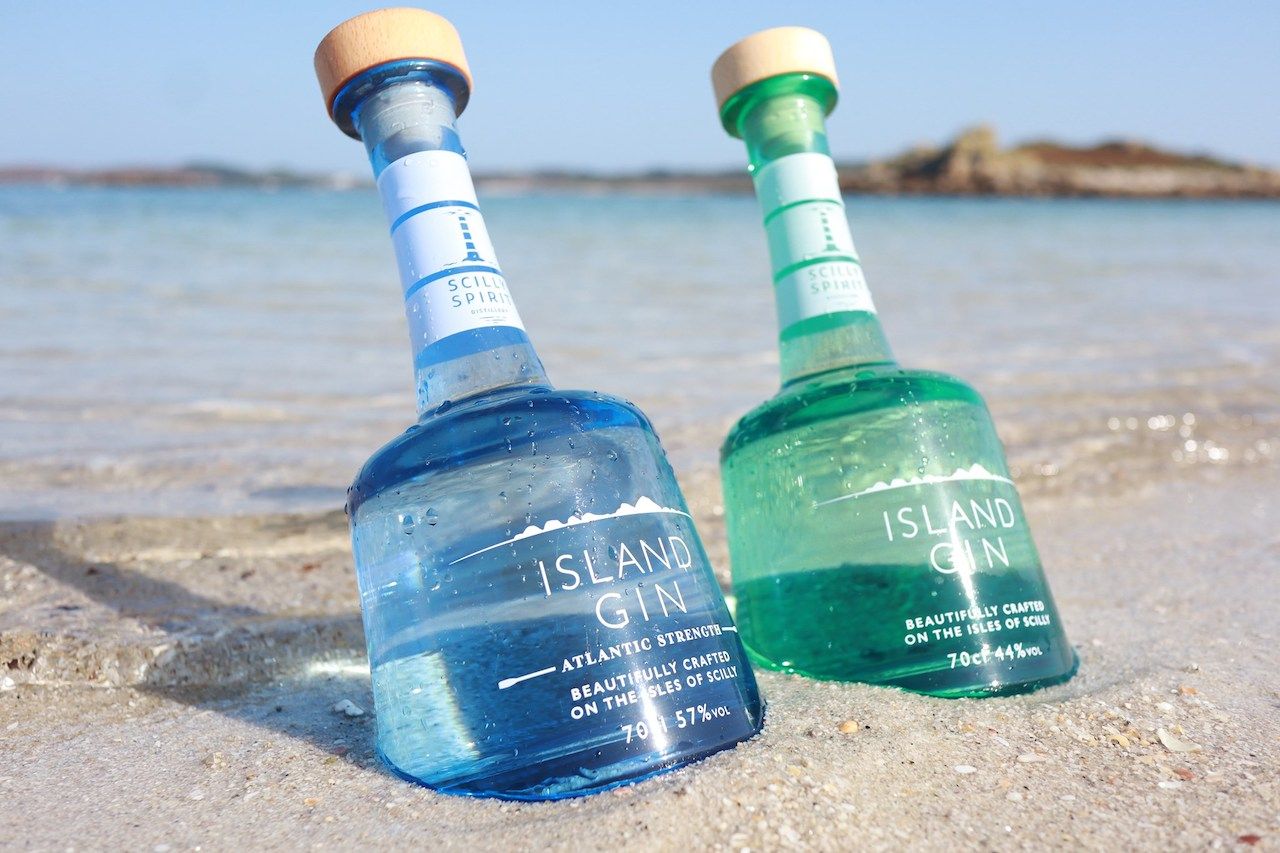 While the Isles of Scilly don’t really get frost, they do get Atlantic storms. When there’s a turn in the weather, there are some worthwhile snug and sheltered options to while away your time while on St Mary’s. For the artsy, the Phoenix Craft Workshops host a collective of seven creative businesses under one roof. You can try your hand at everything from ceramic and silk painting to stained glass decoration, beaded jewelry, screen prints, and linocuts. All this is an easy 10-minute stroll from town.

The Scilly Spirit Distillery has also won several international awards for the design of its bottles and, more importantly, the contents therein. You can visit the distillery to enjoy samples of their aptly named Island Gin, and join a factory tour. You can also partake in their gin school, using any mix you wish of the 60 botanicals they offer — making it that extremely rare school where students look forward to indulging in their homework. Believe it or not, this small island also has a winery, a mark of how different the climate is here to the rest of England. The Holy Vale Winery has a cozy tasting room open by appointment.

History in the Isles of Scilly 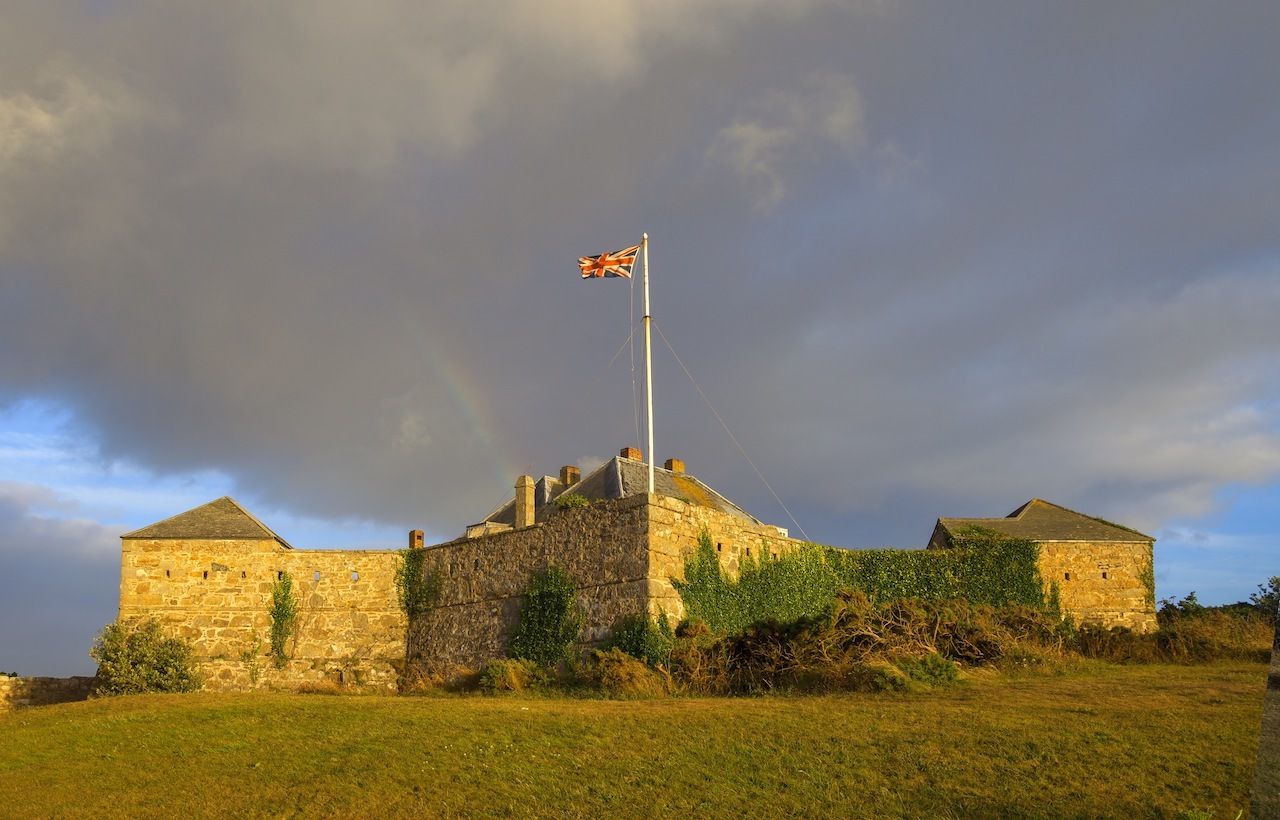 England is well known for its vast array of historical buildings and landmarks. The Isles of Scilly are no slouch in this department. And the ones on St Mary’s just happen to be built in the most scenic spots on the British Isles. Bant’s Carn, a burial monument dating from the Bronze Age sits atop the remnants of an Iron Age village, high on a hillside.

The building that rises above them all, literally and figuratively, is Star Castle, found on the highest point of the island. Unique in its construction, it’s the shape of an eight-pointed star and was built in 1593, at a time when the British were fearful of a Spanish invasion. These days, as is the fate for almost all beloved castles, it’s been turned into a hotel.

Yes, you can stay here for a pretty penny; it’s very much aimed at the luxury set with fine dining and luxury linens. Star Castle is open to visitors and it’s well worth the walk up the steep cobbled lane to the top of the hill to take in the view and explore the ramparts and grounds. The bar is in what were the underground cells. A case of “let them eat cake” and drink in the dungeon.

The best beaches in the Isles of Scilly 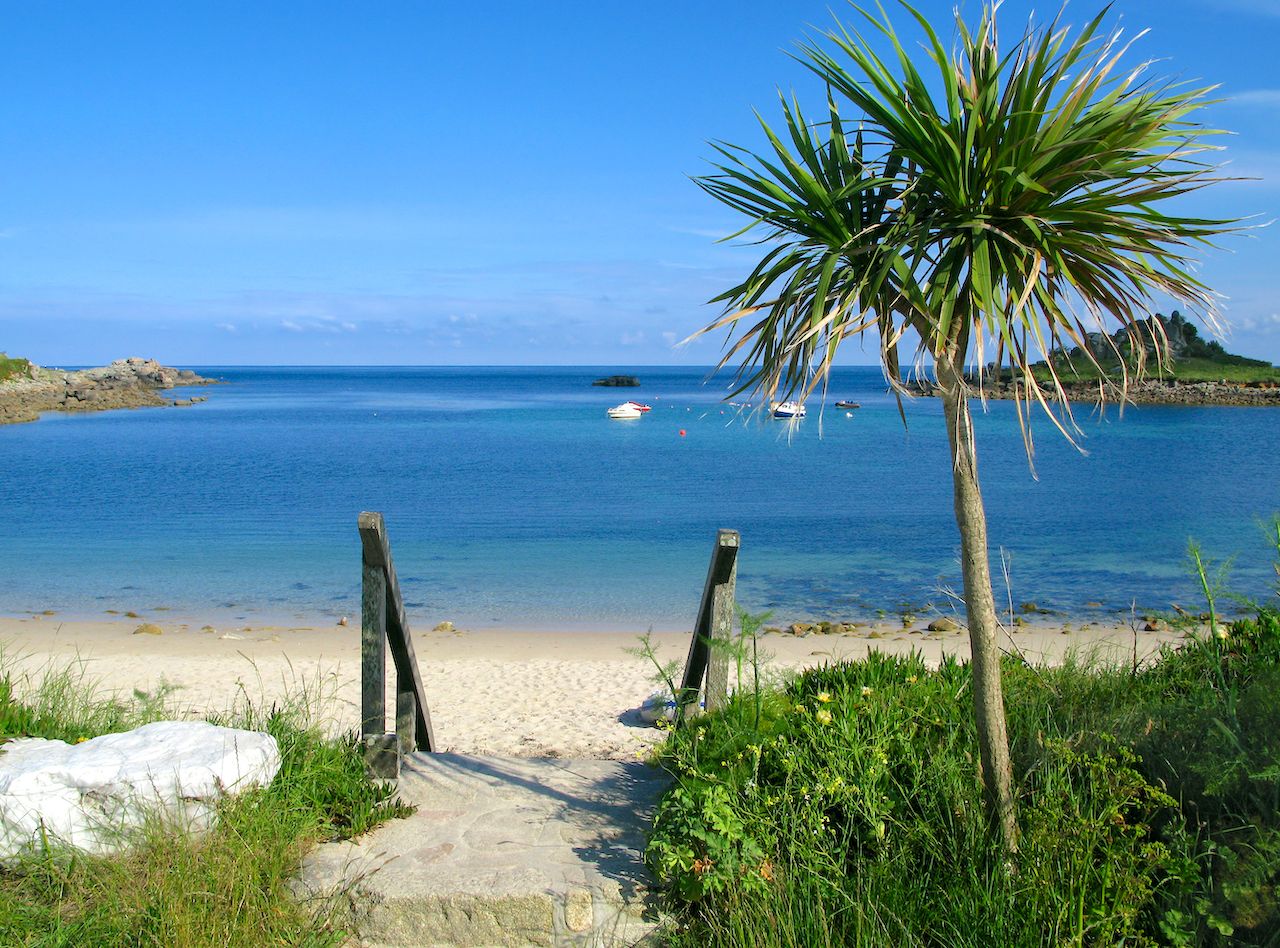 You can’t talk about Scilly or the Isles of Scilly (don’t refer to it as The Scillies, as locals will scoff) without mentioning the multitude of Caribbean-esc or Maldivian-like white sand beaches. No visitors seem to be able to agree quite where to compare them to, but it doesn’t matter. If you can’t succumb to sand-induced serenity here I’m sorry, but there’s little hope for your sanity.

In summer, even when St Mary’s is buzzing with visitors, it’s not difficult to find near-empty coastal spots. In just a 2.5 mile area you’ve 11 beaches and several headlands to choose from. And if there are too many people around for your liking, it’s easy to jump on a boat for a trip to one of the other many beach-strewn islands.

Where to eat in Scilly 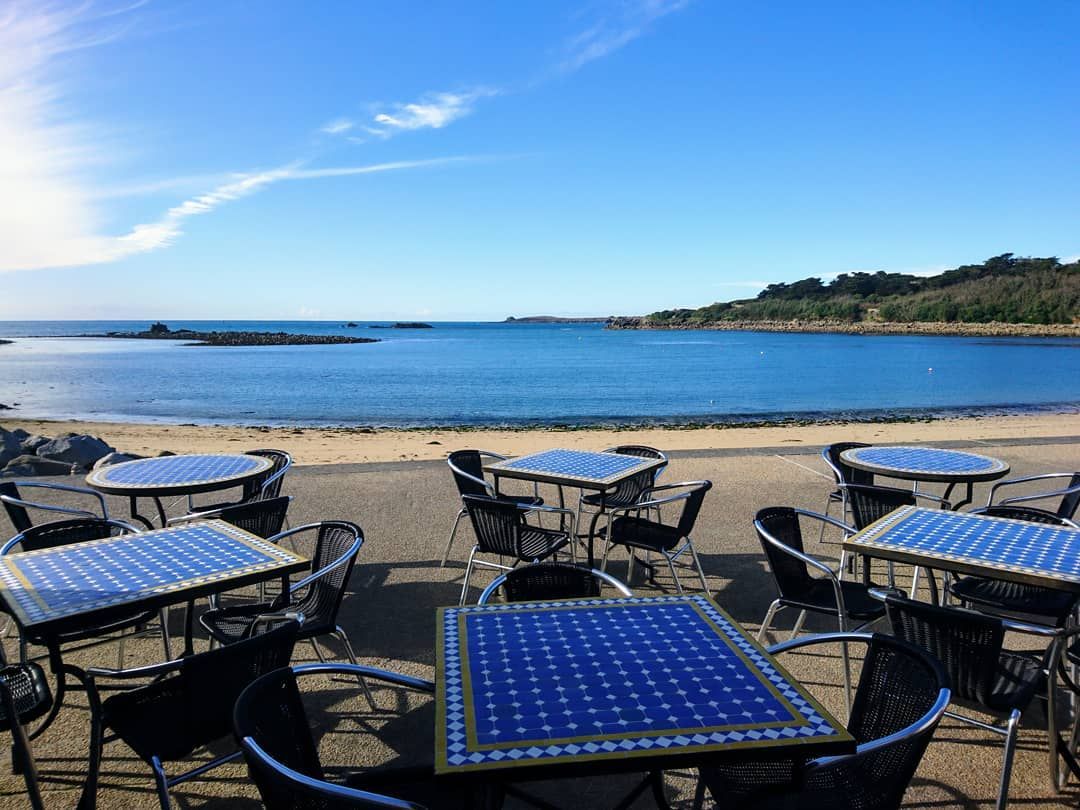 From fine dining to piping hot fish and chips wrapped in newspaper, there’s an array of eateries and pubs. Among them are Dibble and Grub, the name being a play on gardening and a hint at the local produce that goes into its tasty tapas. These morsels also benefit from the bounty from the Atlantic waters that the casual restaurant overlooks. The Mermaid Inn is the island’s most visible pub, serving up quality ales, but there are plenty of other cafes and sandwich shops as well.

Throughout the archipelago, there’s a heavy focus on fresh seafood. Lobster tails, crab, turbot, and shellfish are frequently found on the menus. As is handmade ice cream. Menus change according to seasonal availability. On the diminutive isle of Bryher, the Crab Shack serves crab, scallops, and muscles, to which you can add bread or salad. It’s closed for the winter.

Other islands to visit in Scilly 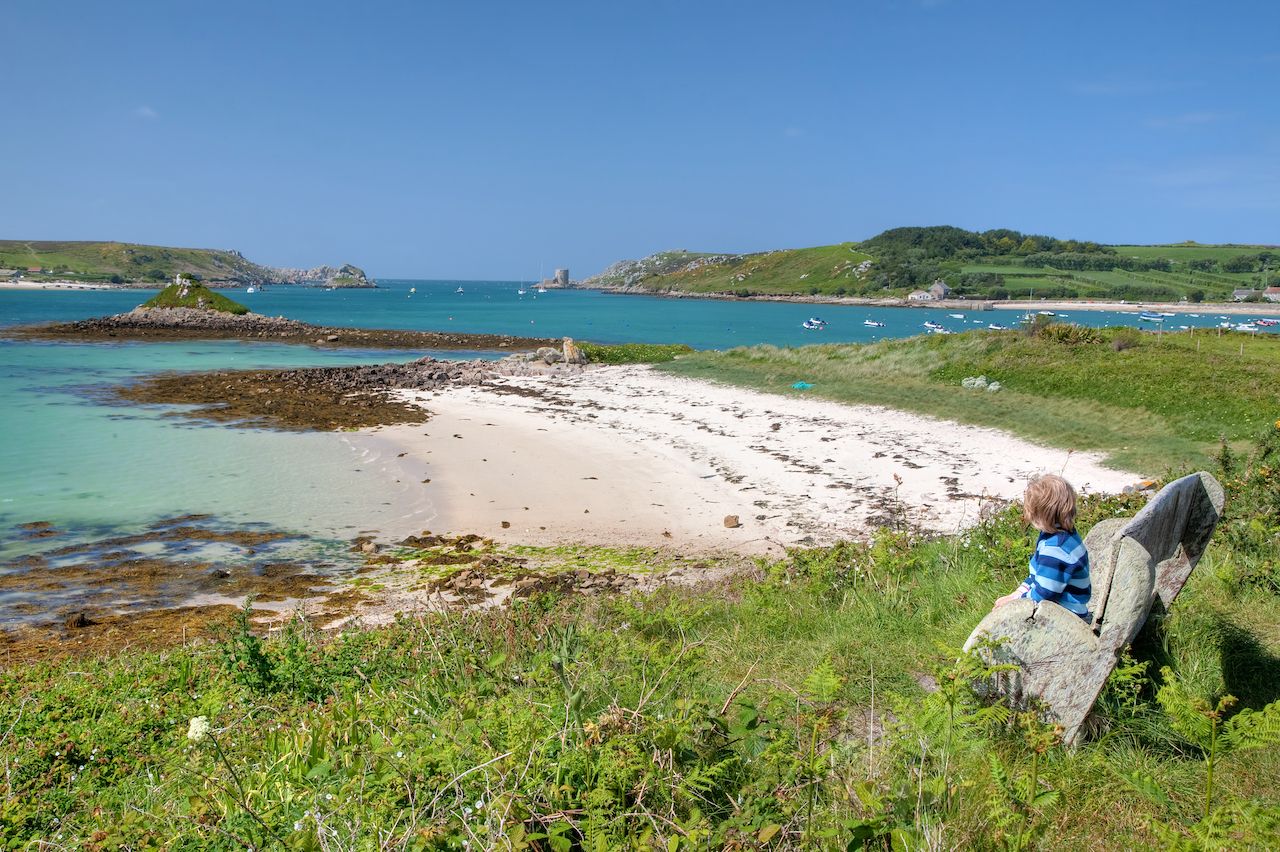 All the islands are as quaint as a Wes Anderson film set, and I’d recommend a visit before he does shoot a movie here. It’s impossible not to like a place that’s famous for flowers, pristine beaches, honey, and ice cream. Here are the other isles to explore.

Bryher — The smallest inhabited island in the archipelago is home to one of the most beautiful places in the world to pitch a tent. The Bryher Campsite offers sea views from every site, has a castle close by, and if you simply turn 180 degrees you can see sunrise and sunset from the same spot. It’s small, has the basics (including nice showers), rents tents, and is run by very friendly folk.

Tresco — This car-free island is home not just to the Tresco Abbey Gardens, but to the ruins of Cromwell’s Castle, built in the 17th Century and overlooking New Grimsby harbour. Honey and spiced rum are the main products produced here.

St. Martin’s — This island hosts a renowned flower farm, winery, and plenty of secluded sandy beaches. You can snorkel with good-natured Atlantic Grey seals in the clear waters.

St Agnes — Located at the very southern tip of these isles and home to only 72 people, St. Agnes is known for its Troytown Farm ice cream made by just nine cows. It’s officially Britain’s smallest dairy but still manages to produce 30 flavors of ice cream.