The Outer Banks of North Carolina — a chain of beach-lined barrier islands stretching for over 100 miles — might as well be called the “Adventure Capital of the Atlantic.” It’s here that high sand dunes roll and whip in the wind, wild horses roam, inland forests hide rare birds and wildlife, and kites and kayaks are common modes of transportation.

Made up of small, historic towns and villages — all of the OBX has only 50,000-some residents — no season is crowded or rushed. But the outdoor adventures? Those can be as fast-paced as you can handle. When you’re ready to take to the sea, the sand, or the skies, here’s how to satisfy your appetite for adventure.

Hit the water — and fly. 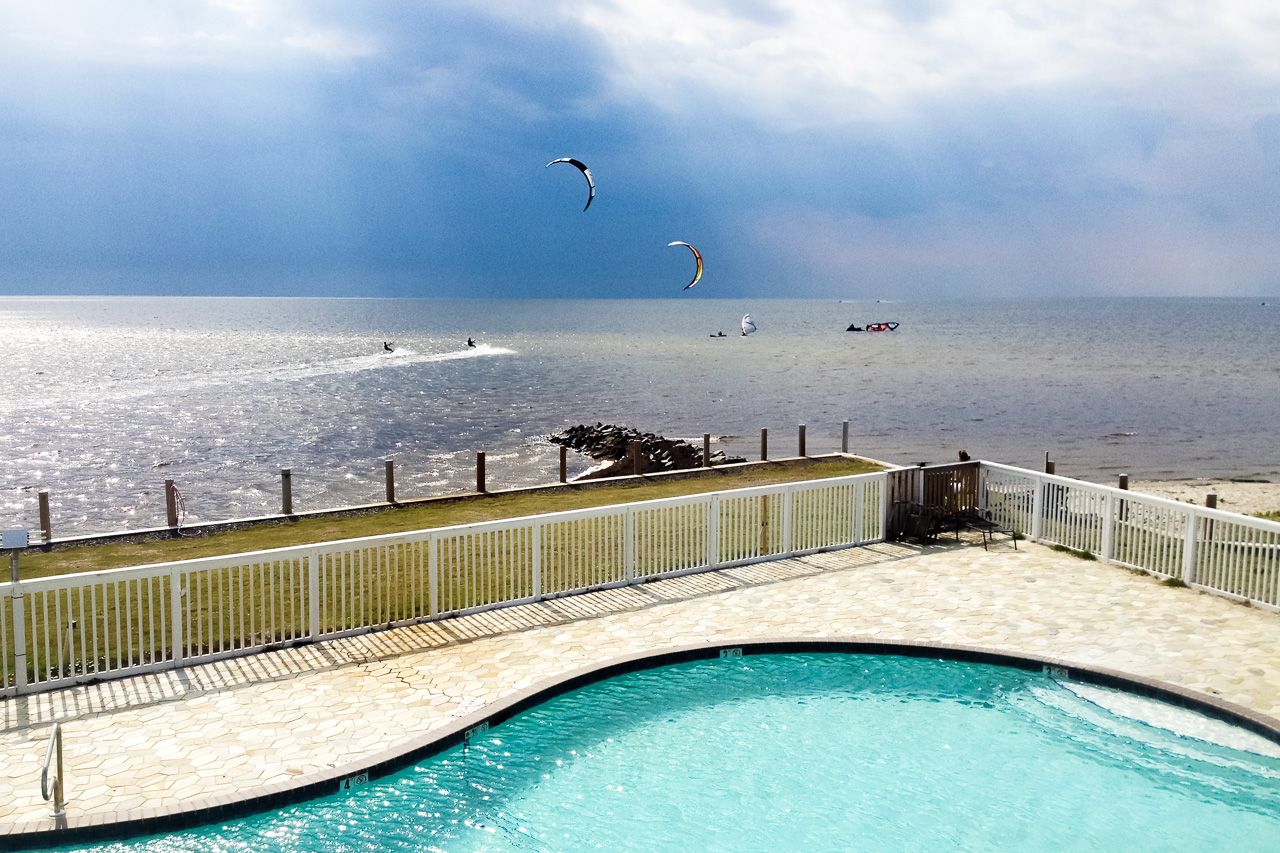 There are as many methods of getting on the water in the Outer Banks as there are environments. In creeks and estuaries, from surfside to soundside, you can ply the waters with a kayak, canoe, standup paddleboard (SUP), kiteboard, pontoon, catamaran — or, in some cases, you could just hop in.

But say you want to go fast. This is the spot to try out kiteboarding and windsurfing — the combination of colliding ocean currents and their breezes creates the ideal environment for harnessing the wind and taking flight. There’s a reason, after all, that the Wright Brothers tested out their contraptions right here.

If you’re on the fence about taking a lesson — outfitters abound and know to expect true beginners — the annual OBX-Wind Competition will either serve as serious inspiration or convince you spectating is your thing. Over the course of a week in November, the pros gather on the open water to freestyle, slalom, and race to the finish line.

Hit the water — with a paddle stroke. 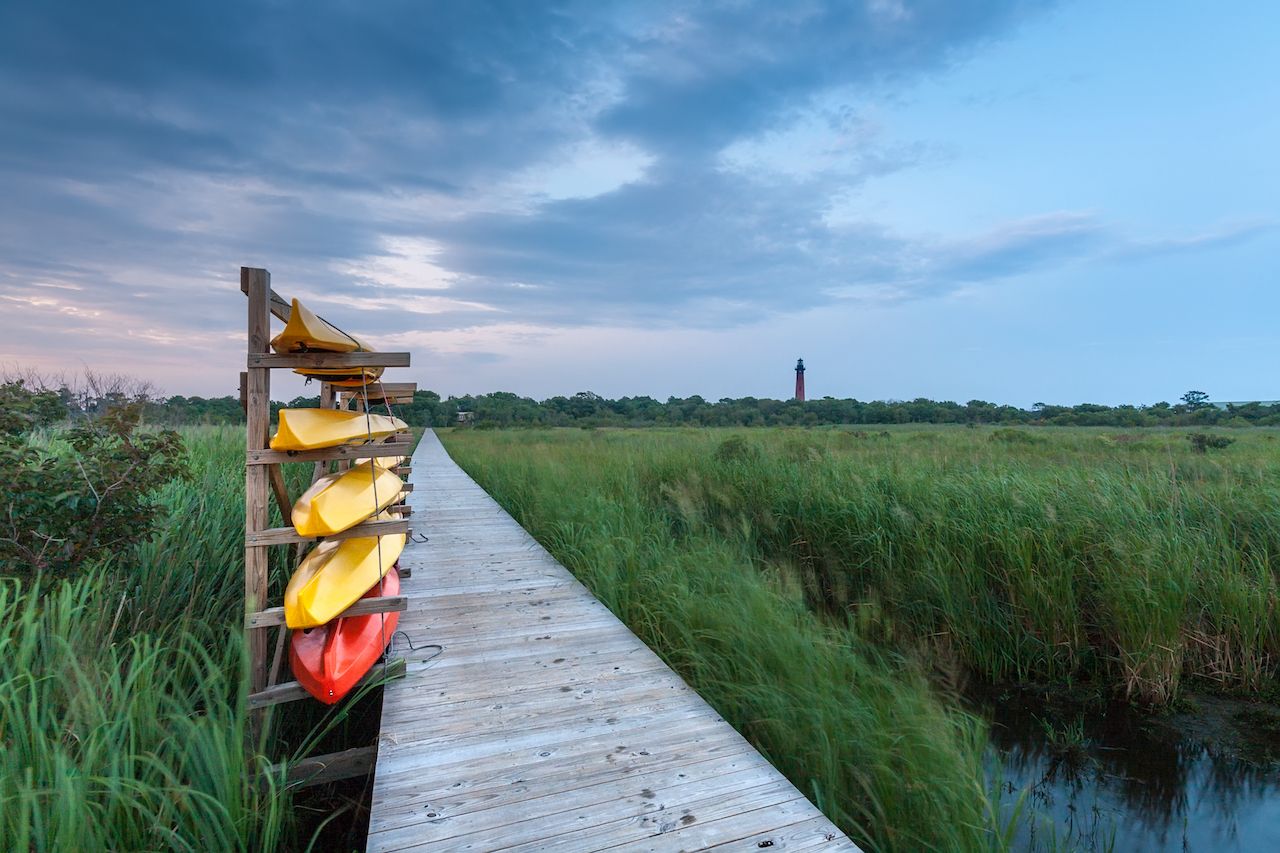 But back to slowing down. While the Outer Banks itself is a maze of waterways worth a paddle, there are a few spots that bubble up to the top of the list again and again: 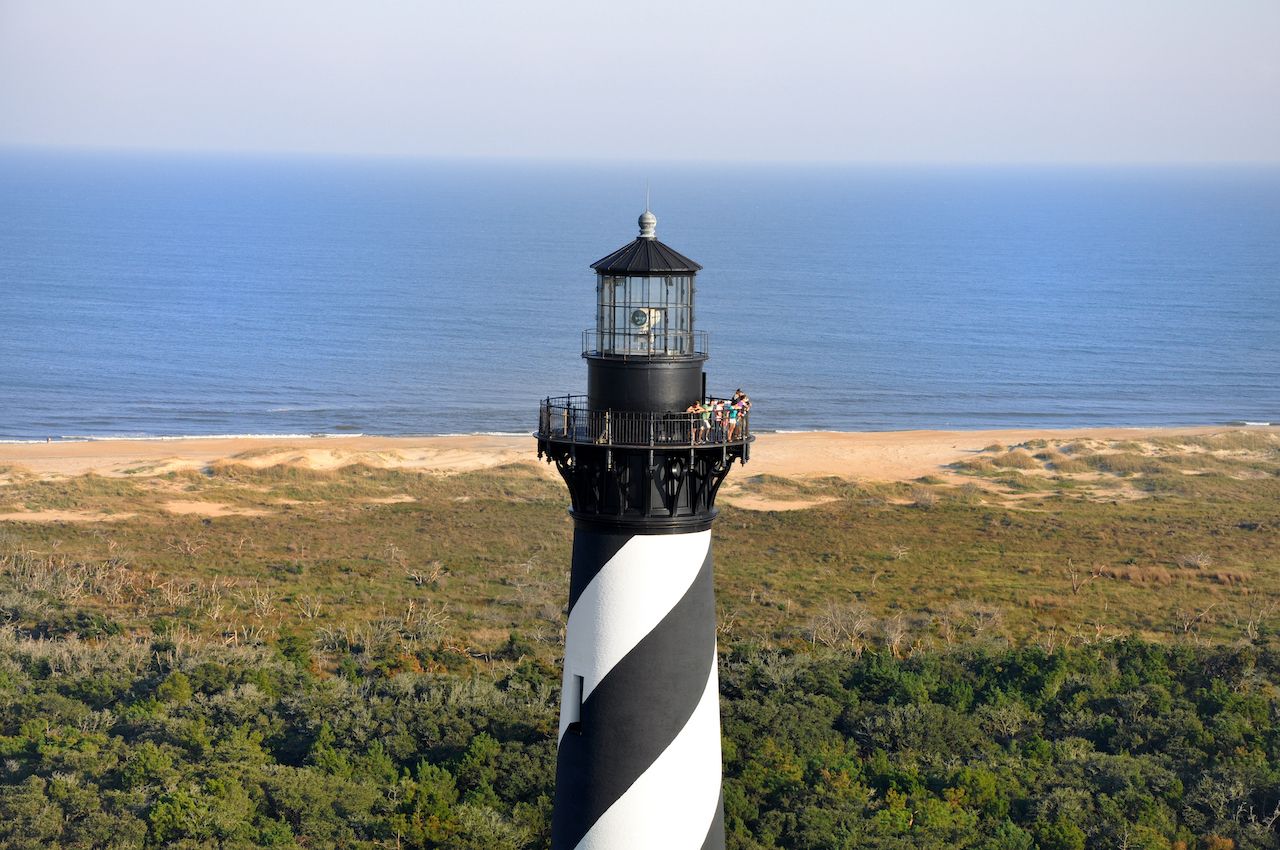 Some of the most iconic lighthouses in the United States rise high above the North Carolina coast, with the greatest concentration in the Outer Banks. Picture a lighthouse, and you might be picturing one that’s right here.

Let’s start with a fan favorite: Cape Hatteras Lighthouse, adorned with distinctive black and white barber-pole stripes. It may not be the oldest in the state, but it is the tallest brick lighthouse — on the continent. Though it dates back to the 18th century, it was moved to its present location in 1999.

Meanwhile, horizontal black and white stripes — these bold color patterns enable mariners to spot the lights easily — cover Bodie Island Lighthouse, just south of Nags Head. Watching over the treacherous stretch of open water known as the “Graveyard of the Atlantic,” it’s tucked into marsh and pine, giving it a uniquely OBX feel.

Both lighthouses are climbable seasonally — at least, most years — usually beginning in April. Check their respective websites for details on openings, but know that simply walking in the shadow of these sentinels can leave any visitor in awe. 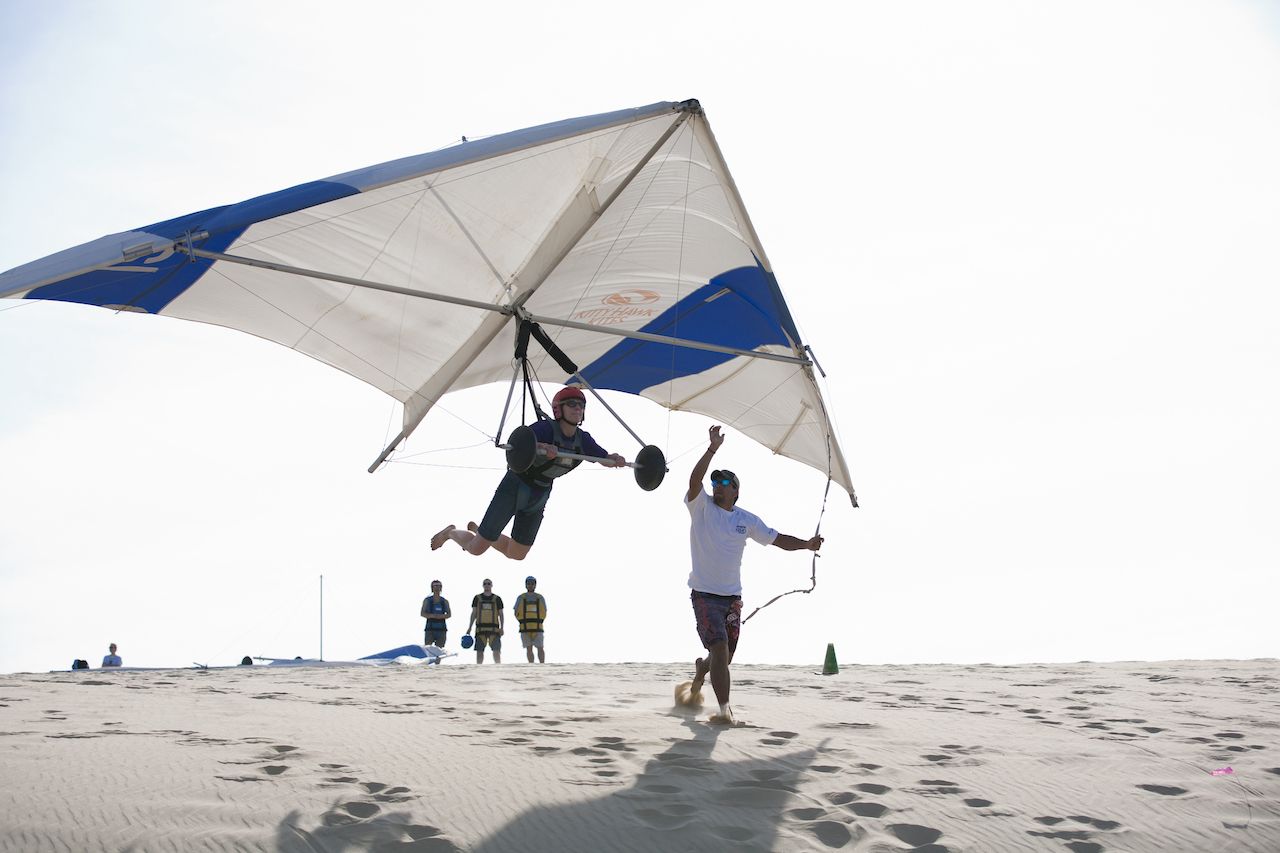 Imagine experiencing the same exhilaration the Wright Brothers must have felt when they took to the skies for the first time. You can get a taste of that exact sensation hang-gliding at Jockey’s Ridge State Park, catching some air right off the immense dunes.

A lesson with Kitty Hawk Kites is around three hours long: You’ll start strapped in, knees in the sand, until you’re ready for your running start, the guides helping you gain speed and take off. If you don’t land on your feet the first few times, know that’s totally normal — and the sand is cushion-soft.

Spend dawn and dusk with rare and endangered birds. 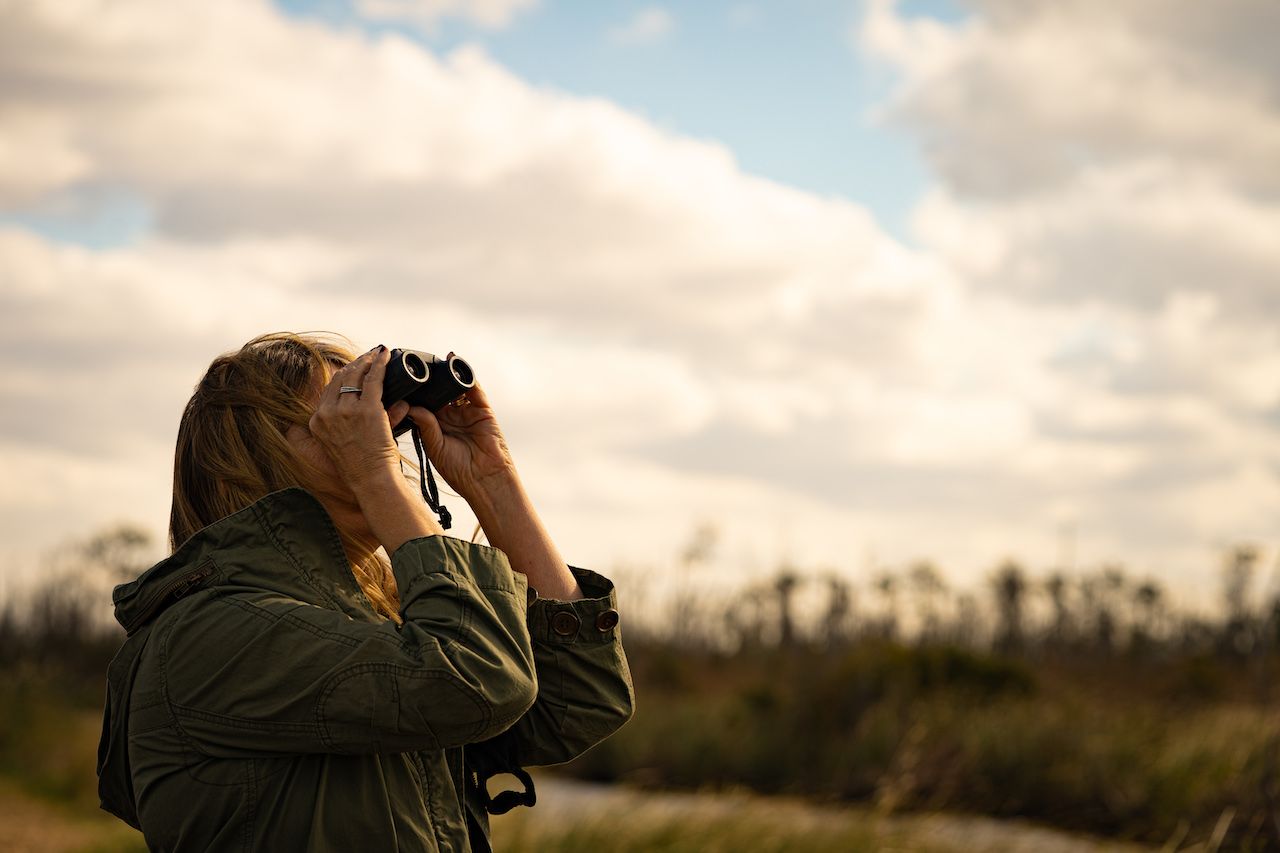 While North Carolina touts itself as “First in Flight,” more than 400 species of the original aviators call this region home, from backyard faves to rare and endangered. Bring your binoculars to these wild spots:

Sit deep in the saddle. 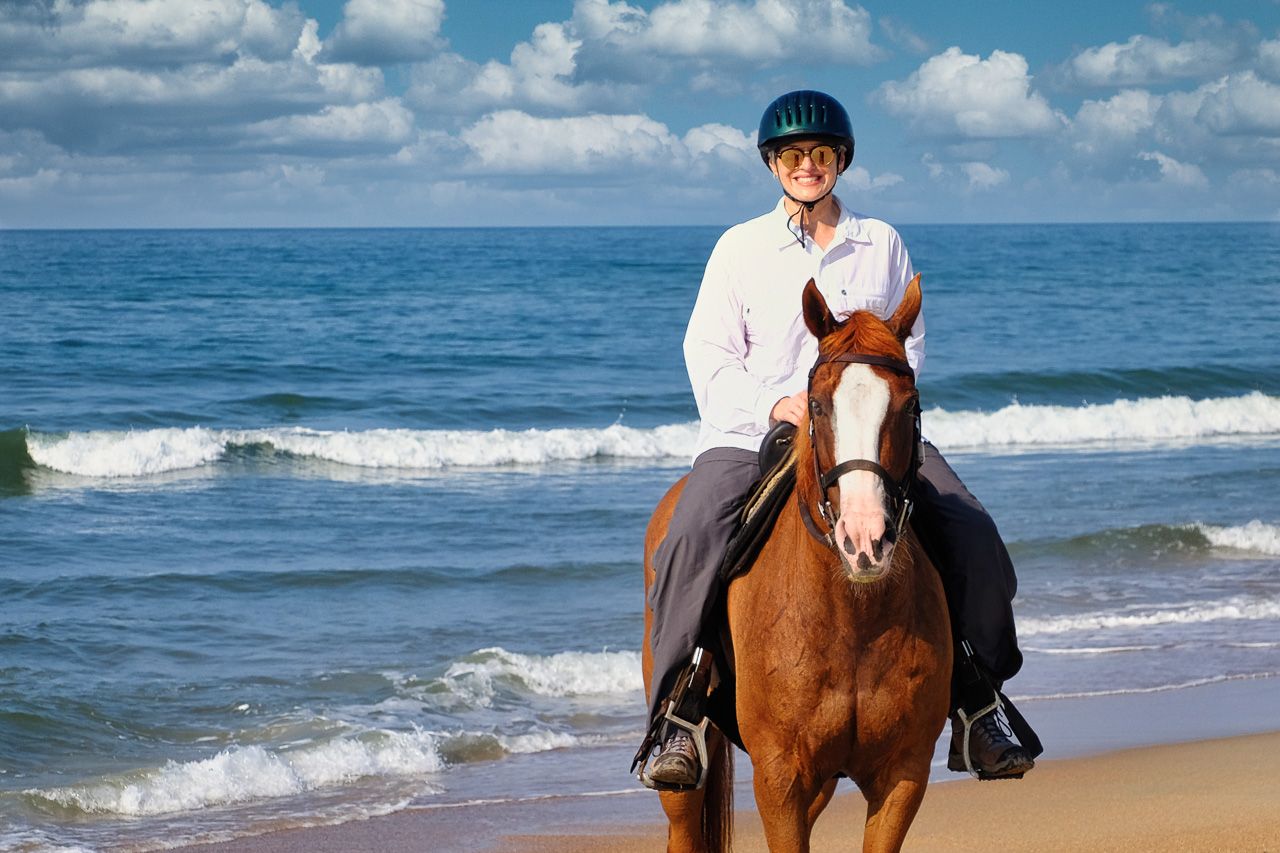 Perhaps you’ve ridden horseback in the mountains, across meadows or vineyards, but there’s something wild and free about riding on the open sand, into the salty breeze. Buxton Woods Coastal Reserve and Cape Hatteras National Seashore — America’s first, by the way — provide that rare combination of both dense maritime forest and beach, and outfitters offer rides through it all.

Tours typically last around two hours, and while most operators have age and weight restrictions (both for the safety of the rider and the health of the horses), experience isn’t essential. Of course, if one member of your crew has the skills to ride and carry a camera, that doesn’t hurt.

Hike from forests and dunes to marshes and open beaches. 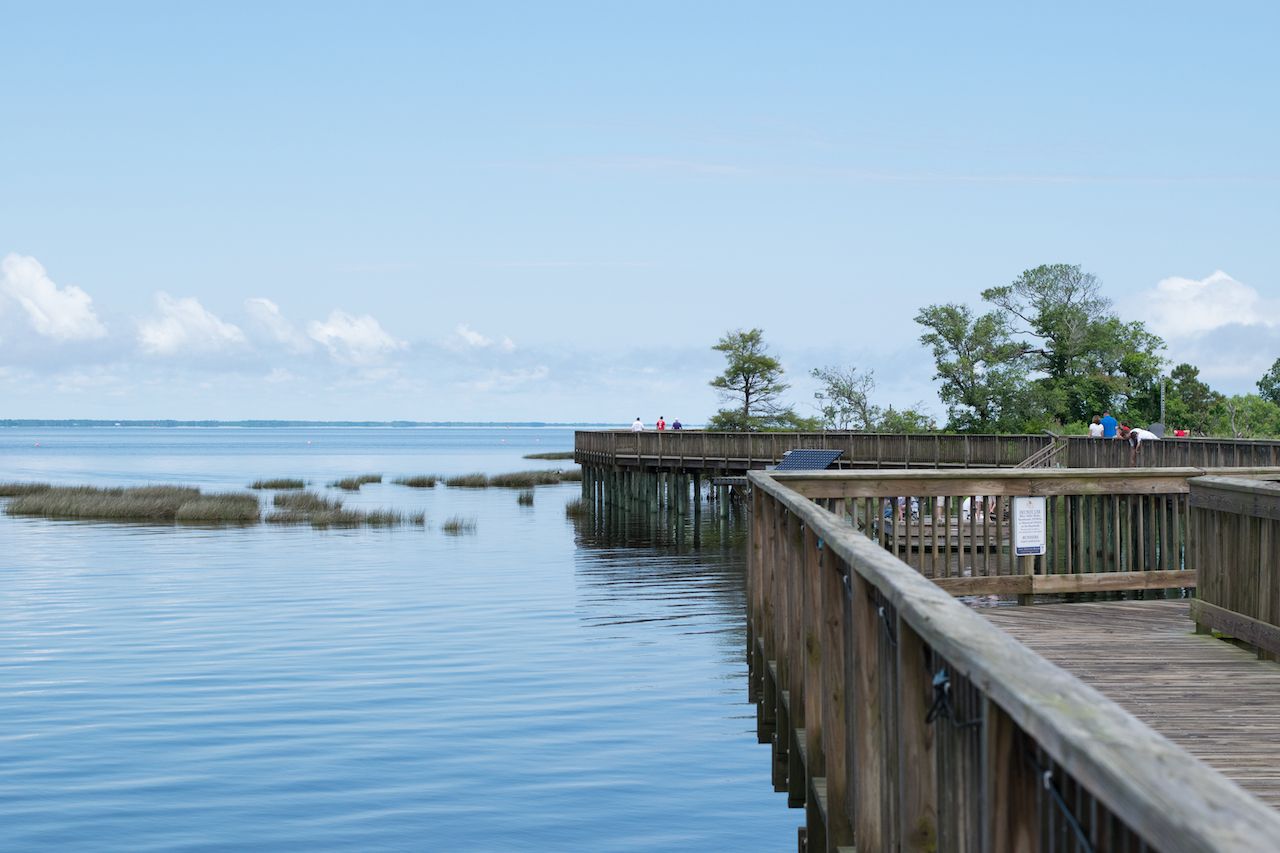 You’ve just spent the past five minutes reading up on sand dunes, maritime forests, wildlife preserves, marshes, estuaries, and rivers — hopefully it’s clear by now that nature runs amok on The Outer Banks of North Carolina. Hiking trails run amok, too, and here are some spots you’ll want to hit with your own two feet:

Angle away the afternoon. 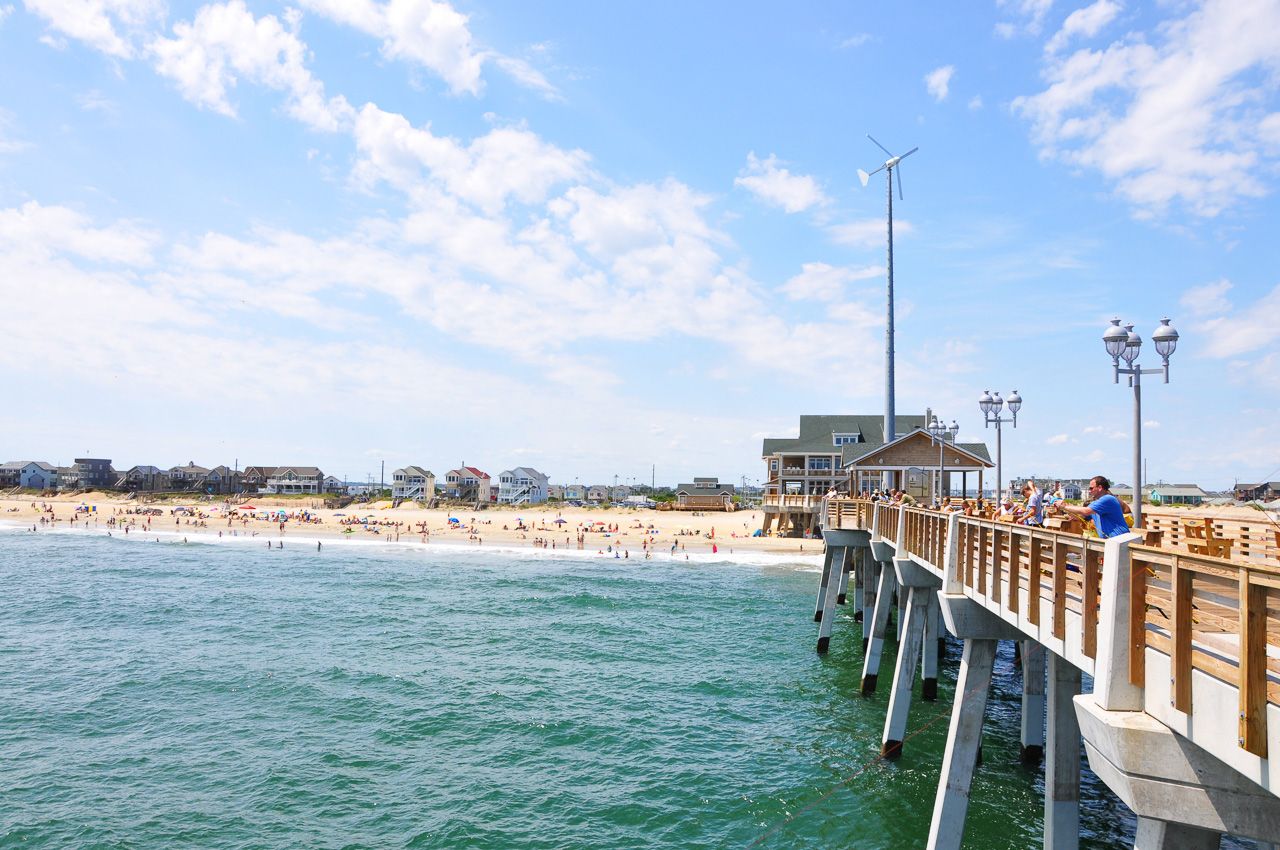 Walk out onto the 1,000-foot-long Jennette’s Pier, and it should become clear pretty quickly that the angling here is top-drawer. And not just from the piers! There’s fly fishing, brackish fishing, charter fishing (offshore and inshore), sound fishing, surf fishing, and a few others — but to keep it simple, know that piers often offer rentals and are covered under a blanket license, and the season starts in March with sea bass, bluefish, tuna, and snapper the standard catches. (Otherwise, you’ll need a fishing license to go out on your own.)

What you want to do will determine where you should go, but so too will the wind and weather. If you’ve got your own gear and license, your best bet is to book an outing with a guide and let them show you the treasures just below the water’s surface. Expect to see trout, sea bass, striped bass, bluefish, tuna, white marlin, blue marlin, wahoo, cobia, king mackerel, flounder, snapper, grouper, crab, shrimp, bay scallops, and oysters.

Tip: Speaking of scallops and oysters, if it’s fresh seafood you’re after, consider attending Taste of the Beach. It’s three April days of endless cracking, slurping, and sampling the freshest seafood from the area’s favorite restaurants. 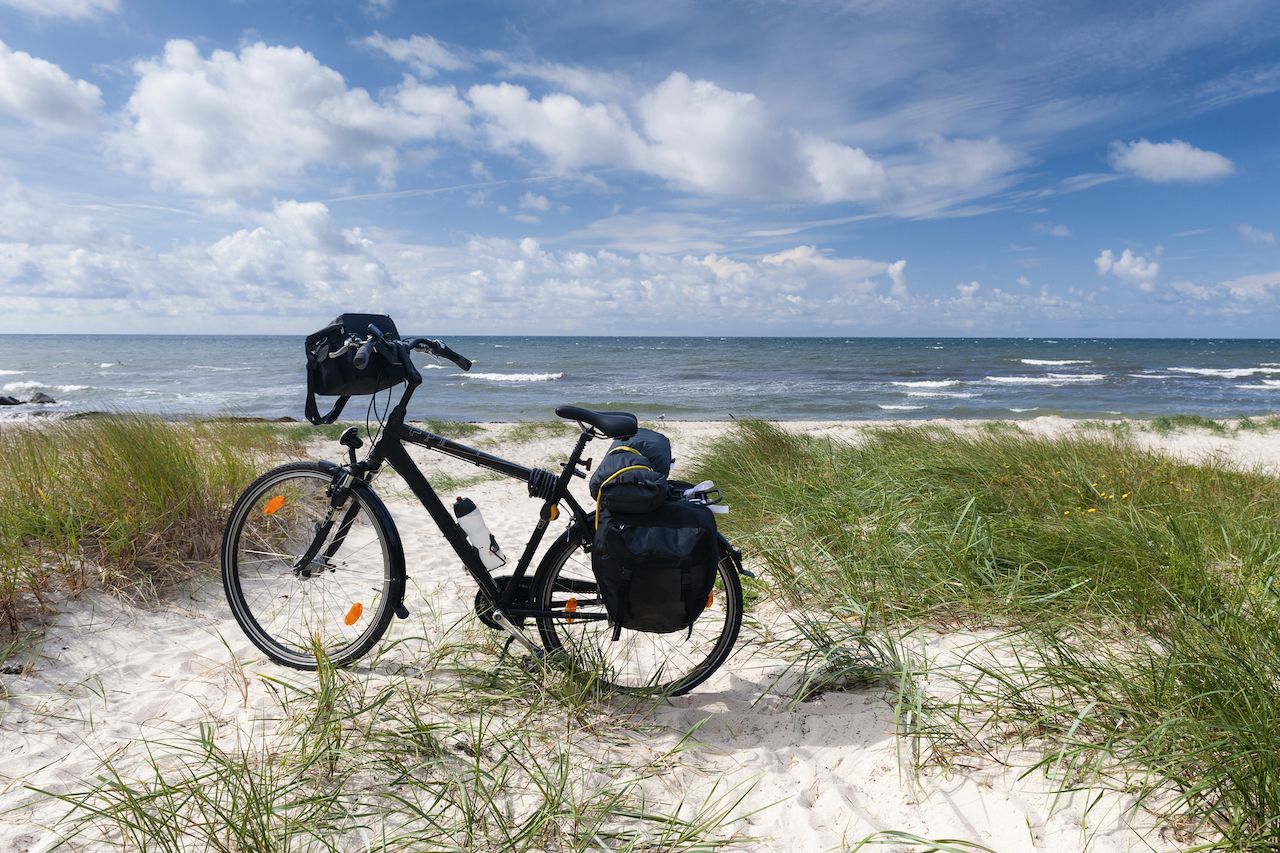 From Duck to Hatteras Island, there are just as many miles of bike paths as there are beaches. Nearly every town or village is marked with multi-use paths, and the open back roads of farm country and wildlife preserves naturally lend themselves to two-wheeled exploration.

With the exception of a few bridges, the Outer Banks are flat and family-friendly. But the experience is hardly uniform, as you pedal from the sand to the sound, from the forest to backwater marshes, from boardwalks to the beach and back again. That being said, there might be one thing that always follows you, wherever you go: the sea breeze.

This post is proudly produced in partnership with the Outer Banks Visitors Bureau.

10 Pro camping tips that will transform your travels