Now reading: The 9 Most Underrated Beaches in Florida
Share
PrevNext

I’ve lived in Florida for a long time. How long? So long I remember when drug dealers used cool stuff like speedboats and Ferraris, rather than highly combustible mobile homes. I remember when people had the decency to hide their grim reaper tattoos somewhere other than their face. Ah yes, Old Florida was a helluva place.

But having been here so long, I’ve gained a lot of knowledge in stuff much nicer than exploding meth labs and face tats. I’ve also spent enough time on our world-famous beaches that my skin is roughly the consistency of a football. Ok, not really, but I have seen the best our 825 miles of beaches have to offer from the Panhandle to the Keys while traveling the state both for work and leisure. This has led me to some fantastic stretches of sand, many of which are overlooked by the vacationing masses. So if you’re planning a trip down, these are the best Florida beaches I’ve found that the crowds haven’t yet invaded. 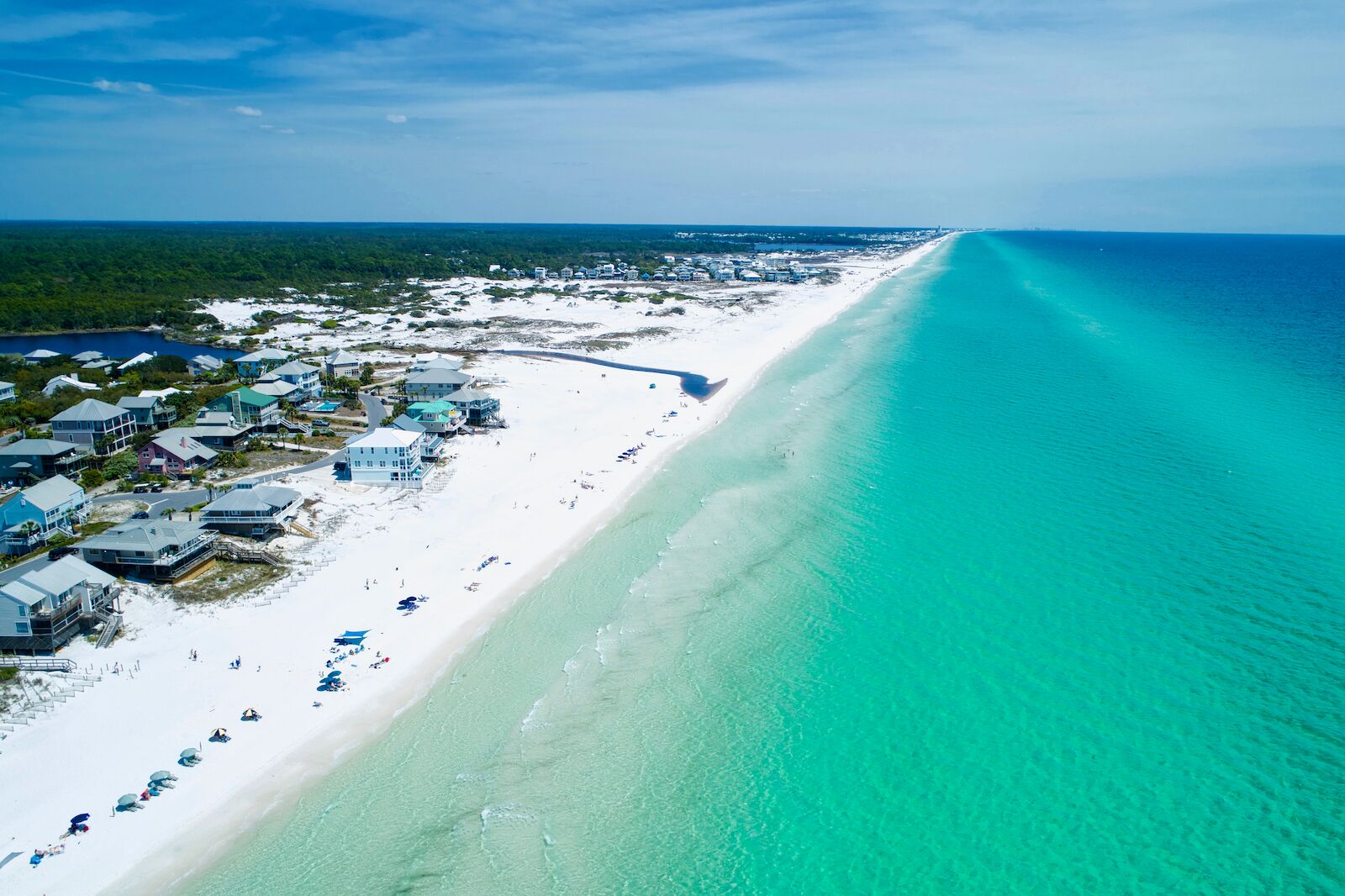 Tucked between Ft. Walton and Panama City, Grayton Beach is a little chunk of small town America that’s carved out of Cypress trees along the Florida Panhandle. The beach itself has all the sugary powder sand and turquoise water that one expects from the Gulf of Mexico. But Grayton also has one of the few collections of sand dunes in the world that frequently fills with fresh water. This creates a small, brackish pool where you can set up a lawn chair in a few inches of water and let the breeze blow over you. For more active pursuits, Grayton Beach State Park is home to the Underwater Museum of Art, where artists from around the world have created sculptures that sit 60 feet below the surface. 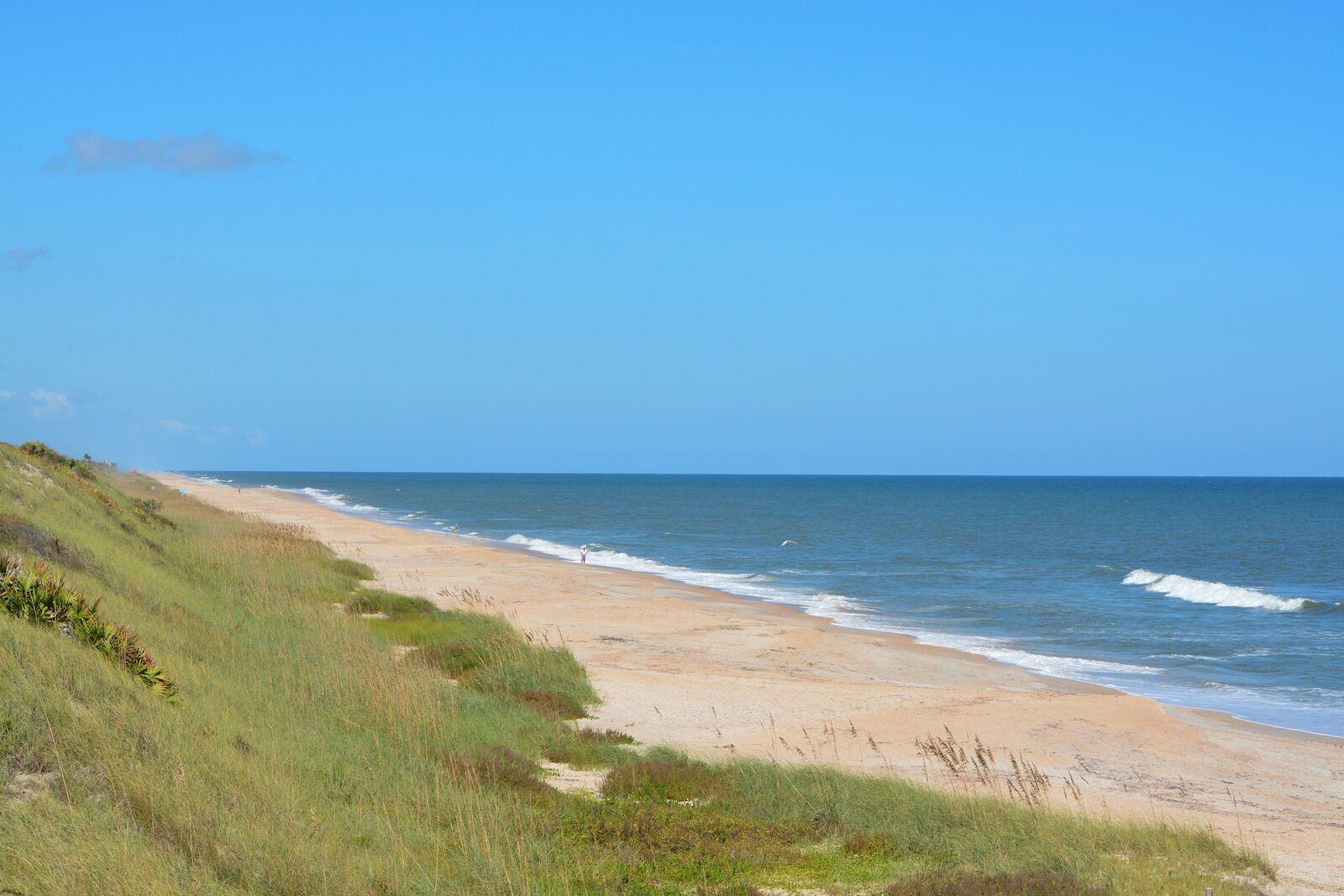 Peek over the tall, grassy dunes that line A1A just south of Ponte Vedra, and you’ll find yourself on a stretch of golden sand that’s unlike any other beach in Florida. Guana River Preserve, with its light tan shoreline and towering plant-covered dunes, looks more like the coast of Zanzibar or some other far-flung beach. It’s rarely crowded with much more than people looking for shark teeth, adding to the isolated allure. The beach has an interesting history too: According to a statue in the parking lot, this beach is roughly where Ponce de Leon first spotted Florida, and though that claim may be dubious at best, it’s still fun to picture his ships gliding off in the horizon.

On the Treasure Coast: Hutchinson Island 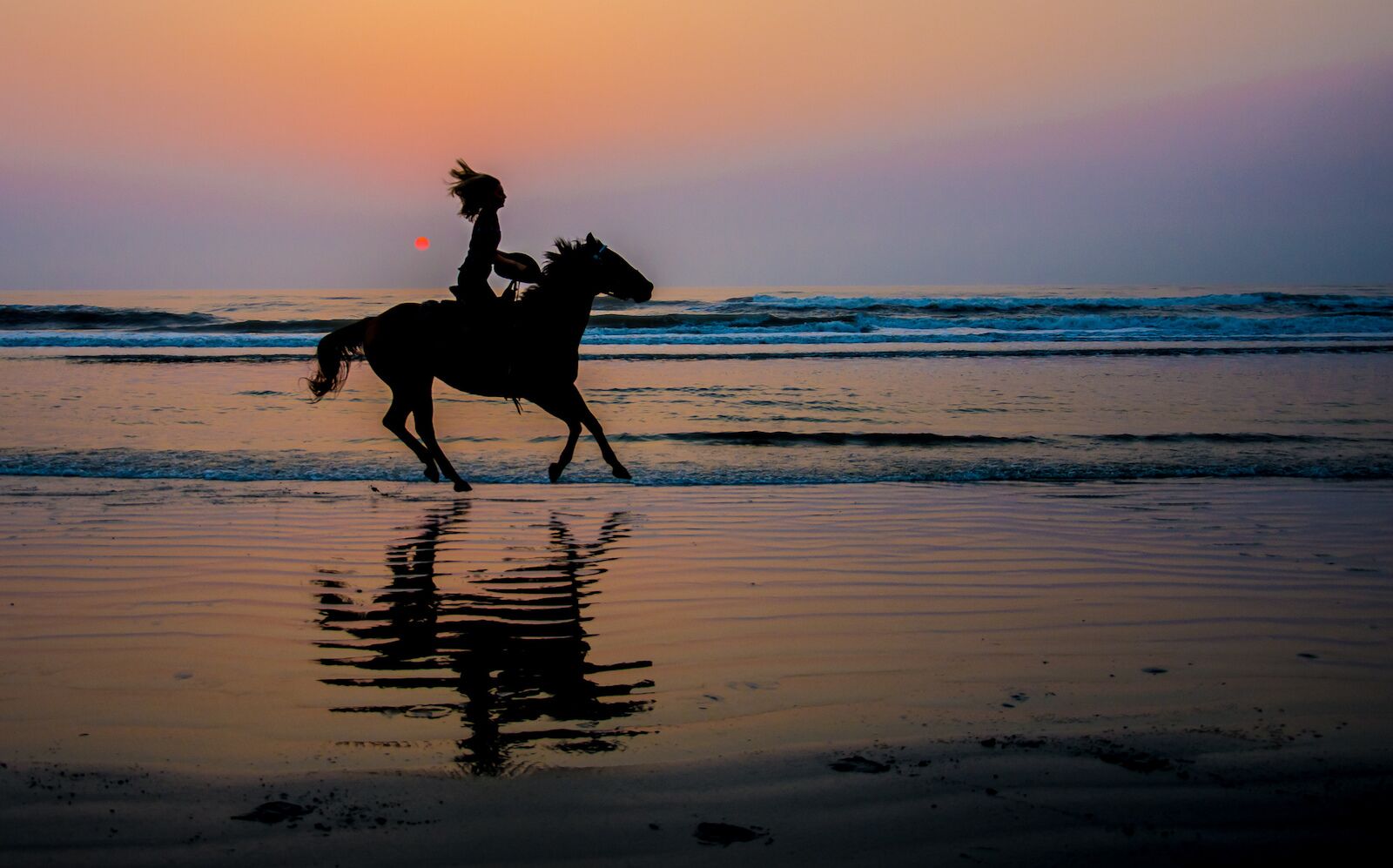 The Treasure Coast isn’t lacking for fantastic beaches, as cities like Vero Beach and Stuart have thus far avoided becoming painfully crowded. But the region’s unspoiled spot is Hutchinson Island, a narrow spit stuck between Ft. Pierce and Pt. St. Lucie. It’s home to Frederick Douglass Memorial Park, one of the few spots in the state where you can ride horses on the beach, as well as into the ocean itself if the waves are cooperating. Riding along Hutchinson Island is a unique way to experience Florida’s beaches, and with waves to the east and forest to the west, galloping down the sand is a true natural escape. 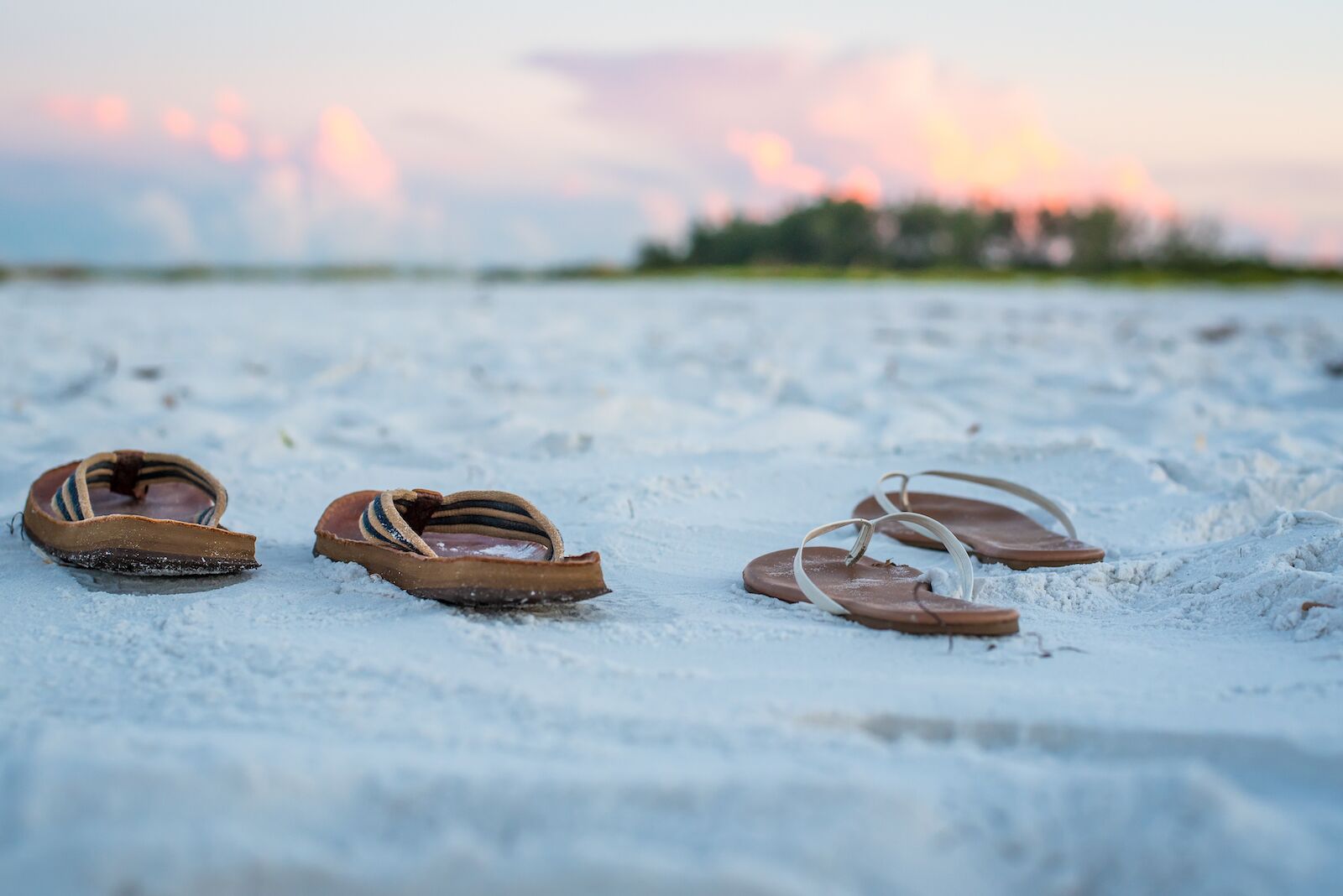 The sunsets at Anna Maria Island are the stuff of Florida legend, and many long-time residents will call them out as the best in the state. With that acclaim, though, comes a shortage of stuff like parking and rental units during peak seasons. What few don’t mention is that just south of Ana Maria you’ll find the same glorious sunsets and silky smooth sand along Bradenton Beach, which gets far less attention. Sunny lunches of fresh seafood and cold beers at the Beach House are pure vacation fantasy, and once you’re done it’s a short walk to either Cortez or Coquina Beach. The latter sits just across the street from Leff Key Preserve, where 1,500 feet of boardwalk take you through majestic mangroves, and a small “hill” (by Florida standards) that offers elevated views of the Gulf of Mexico and Sarasota Bay. 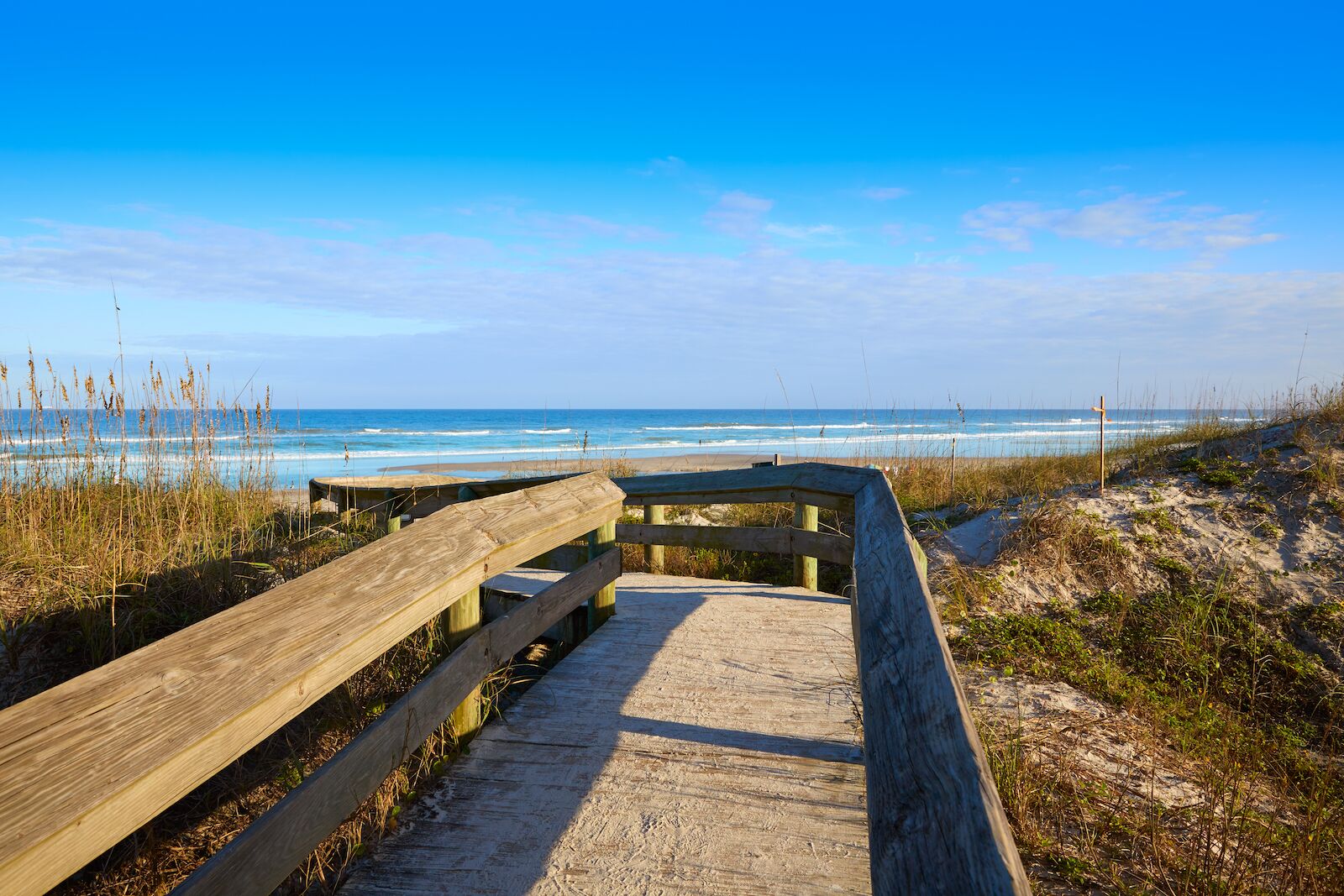 People in Jacksonville are especially fond of letting the city be the far-off fourth city in Florida, because they know they’ve got it pretty good and don’t want the rest of the state in on the secret. You’ll have this epiphany while strolling Atlantic Beach, a wide swath of sand north of Jax Beach with a strong SoCal vibe. That’s not just because the waves here are some of the most surfable in Florida, but also because the intimate downtown is filled with yoga studios, gourmet coffee shops, and organic food restaurants. Waking up early and experiencing an Atlantic Beach sunrise is somehow more tranquil than any other beach in the state, whether it’s because the breezes are just a little cooler, or because the people around you are too. 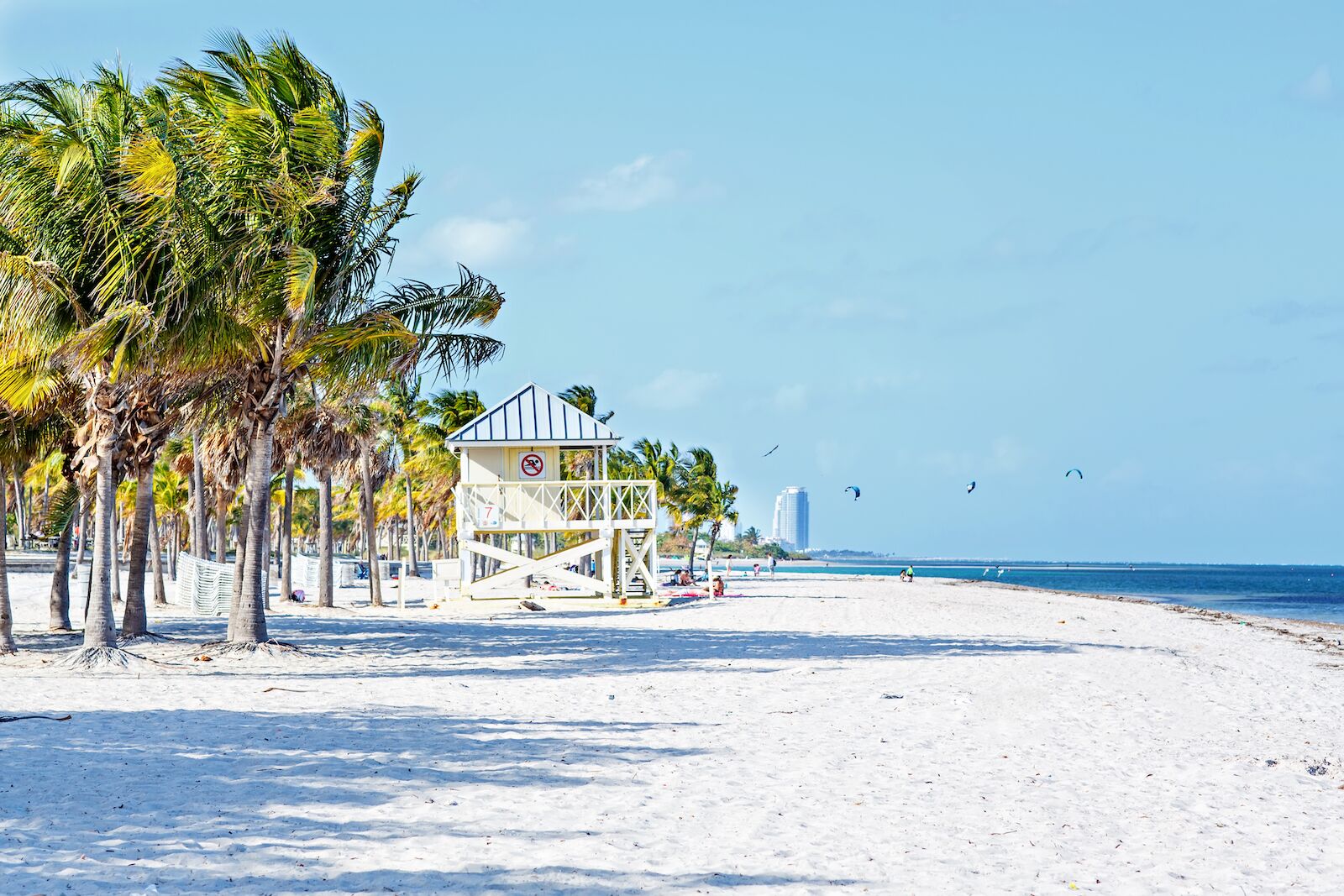 In Miami, the temptation for beach goers will always be ballyhooed South Beach. And nature-loving locals may opt for Bill Baggs State Park at the end of Key Biscayne. But sandwiched in between is Crandon Park, a postcard-perfect county beach a few miles north of Bill Baggs. Crandon has the softest sand of any beach in South Florida, paired with inviting shallow aquamarine waters ideal for swimming, snorkeling, or just trying to cool off. Certain stretches offer views of endless ocean, giving the urban park a desert island vibe. It’s also lined with barbecue shelters and volleyball nets, so if you’re planning a big family trip to Miami you can have a beach barbecue day fairly easily. 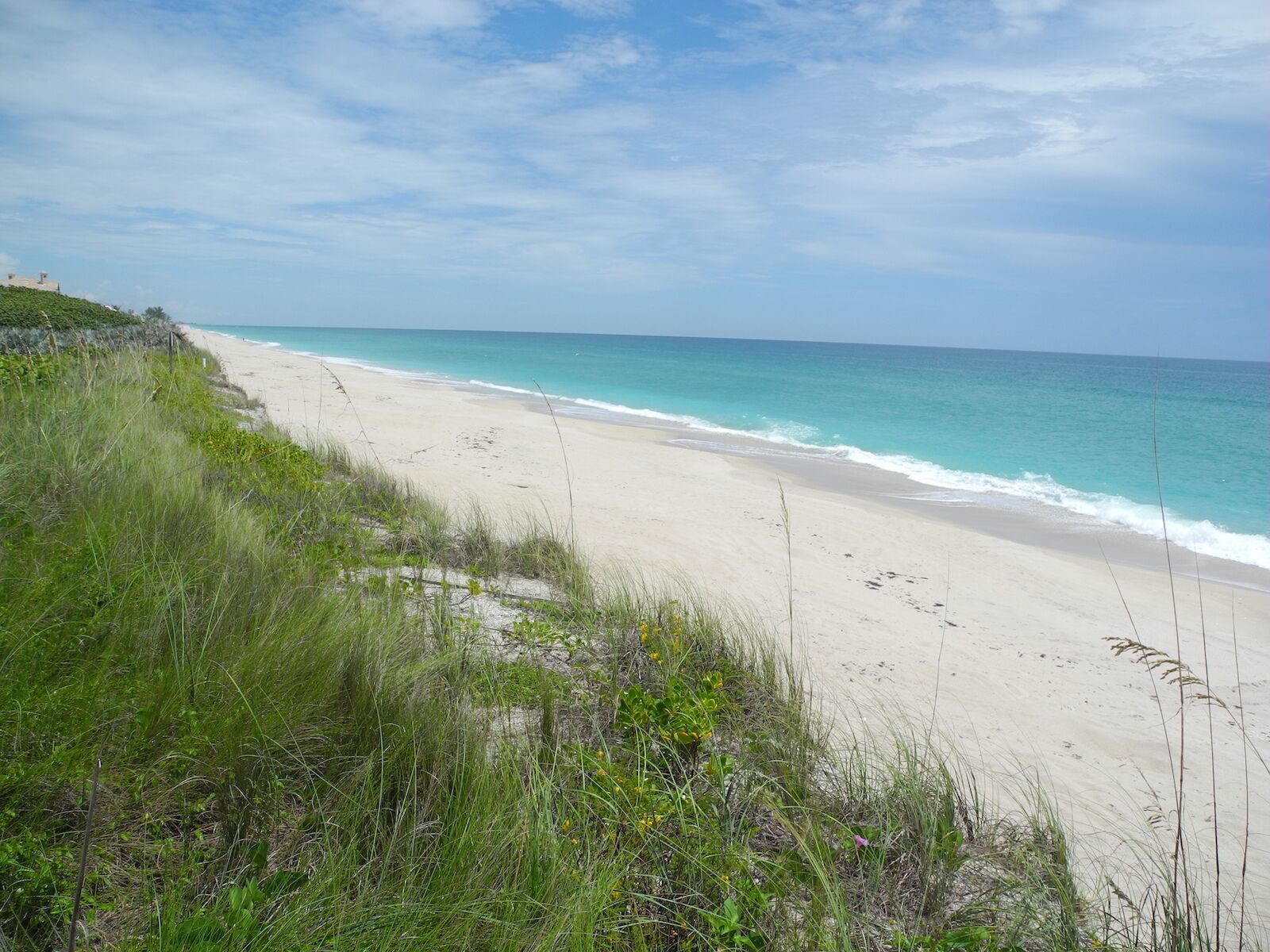 Aside from Cocoa Beach, the beaches of the Space Coast are largely some of the more under-appreciated in Florida, as cities like Titusville and Melbourne aren’t decked out in highrise condos like much of the state. You’ll find this mostly-undeveloped wildlife refuge about 20 minutes from downtown Melbourne. It’s one of the largest nesting areas for green turtles in the world. Not that the beach is teeming with turtles, but if you go during the summer you can join a nighttime turtle walk to observe them nesting. Even during the day, this sparsely populated beach is a pristine slice of natural Florida where the hardwood hammock habitat across the street makes for a cool, shady nature walk after an afternoon in the sun. As you stroll, you’ll learn how its rehabilitation has been one of the state’s great conservation success stories.

On the Florida Keys: Sombrero Beach 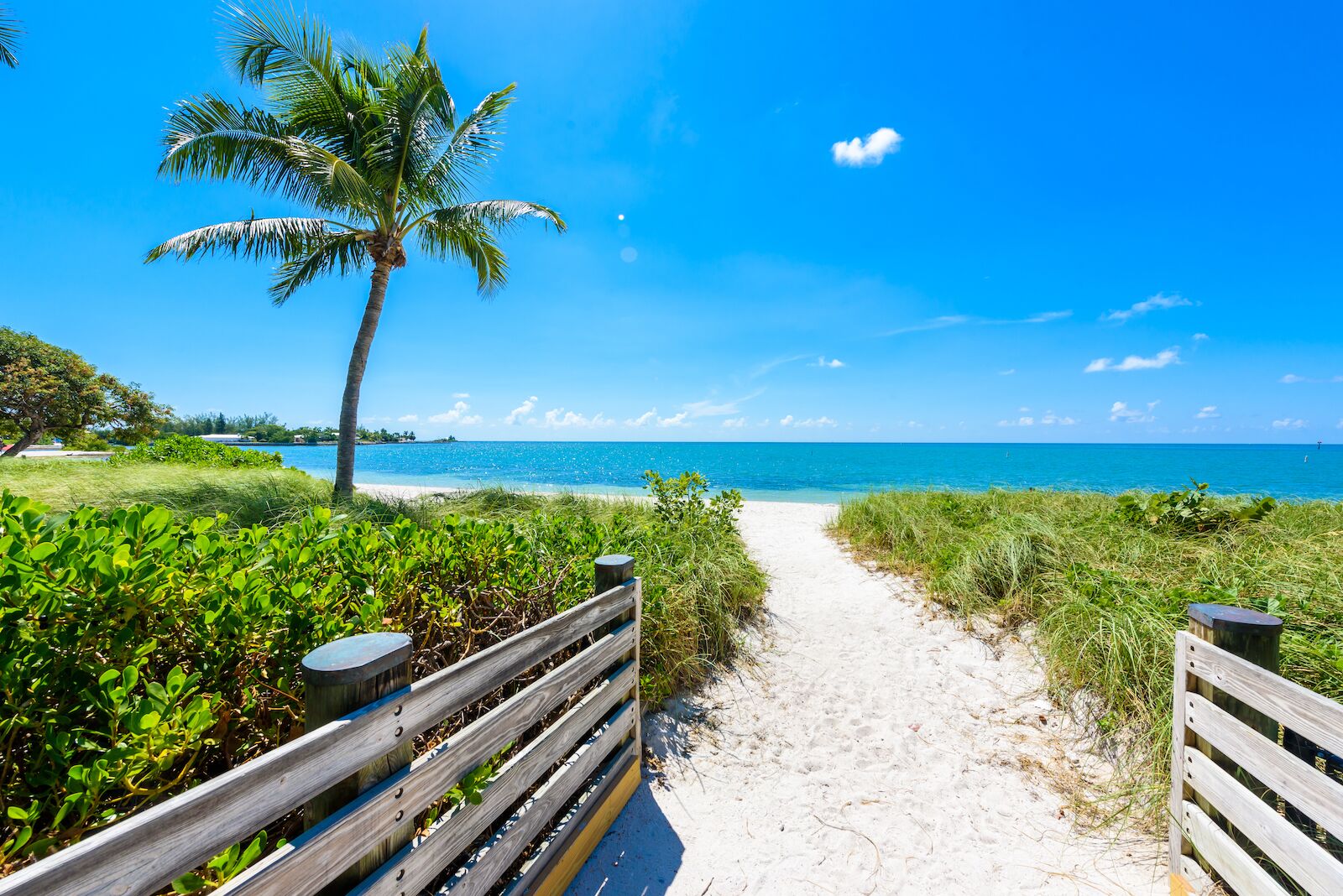 The Florida Keys are much like Hawaii in that the moment you arrive you feel instantly relaxed. They are not like Hawaii, however, in that there aren’t many beaches from which to enjoy said relaxation. Of the few, Sombrero Beach might be the one flying lowest under the radar, a crescent-shaped slice of paradise along the Straits of Florida. The beach isn’t far off the Overseas Highway in Marathon, but somehow it’s overlooked by travelers headed to Key Largo and Key West, so aside from a smattering of families you’ll rarely find it crowded. What you will find, however, is a perfect place to post up with a lawn chair, a cold beer, and some Jimmy Buffet on the stereo. 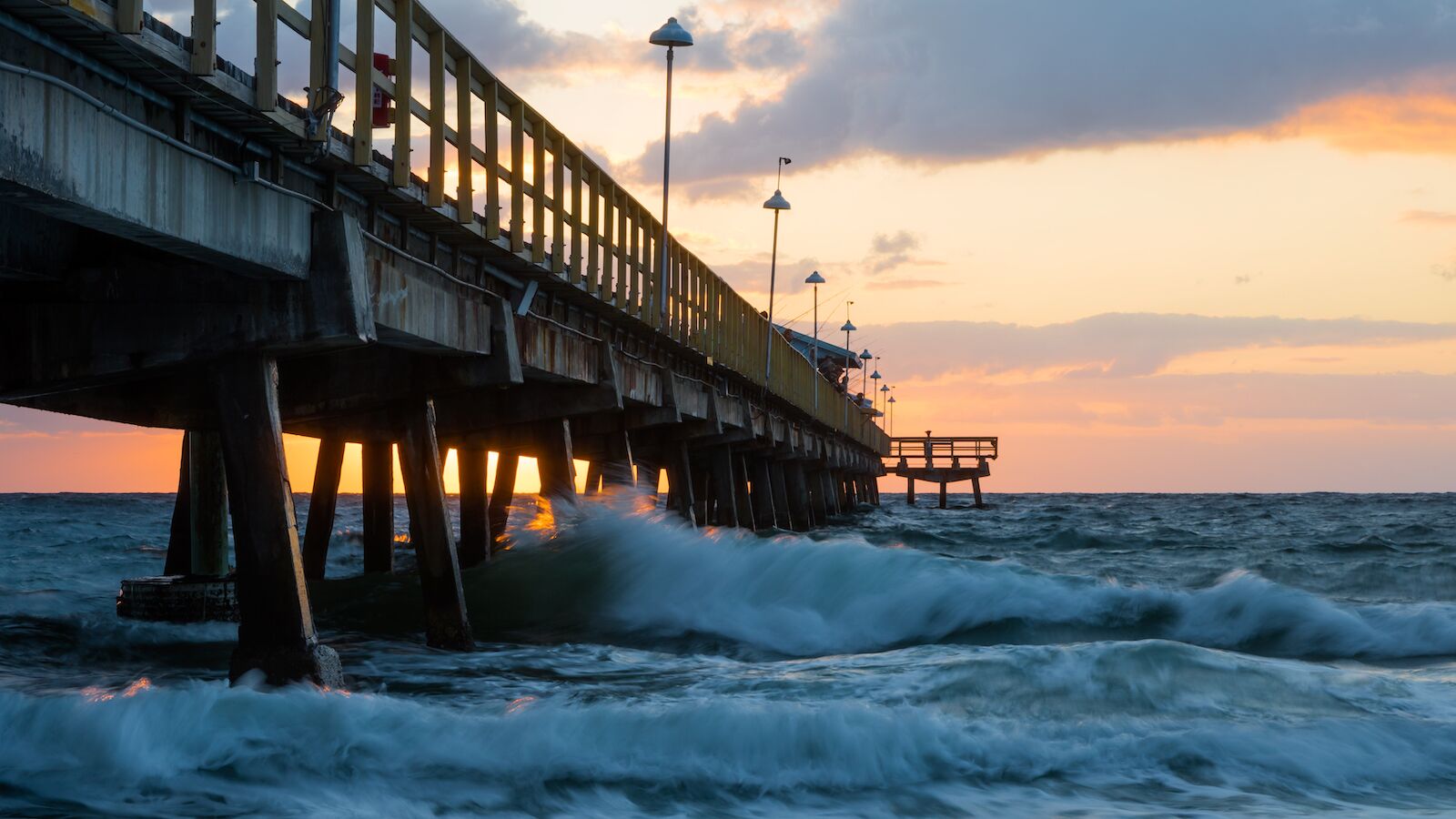 One would think the widest, grandest beach in Florida’s most populous region would be known for a little more than harness racing and Rick “The Model” Martel. Yet somehow, the absolutely enormous beach in Pompano hiding somewhere between Palm Beach and Ft. Lauderdale often gets forgotten. All the better, as an afternoon here means never having to look for space to set up your towel, and also often means finishing up with drinks at the swanky Beach House or Seaside Tiki Bar. Pompano’s draw is more than just its size. Just offshore, divers can tour 17 wrecks in the city’s’ Shipwreck Park. Those wishing to stay above the waterline can also get a workout on the beach’s seaside circuit training machines.