COLORADO, CALIFORNIA, ALASKA. A few states spring to mind when we think about America’s great outdoors. If you’re from the Northeast, New Hampshire is probably one of them. For everyone else, it’s more likely known for being one of five states without sales tax.

New Englanders are right to identify New Hampshire with nature. Home to Mount Washington, the highest peak in the Northeast, and flush with water from its lakes and rivers to its 18 miles of Atlantic coastline, the state was made for all-season adventure. Here are six reasons why New Hampshire should be every outdoor lover’s next vacation.

1. There’s a reason it’s called the Switzerland of America. 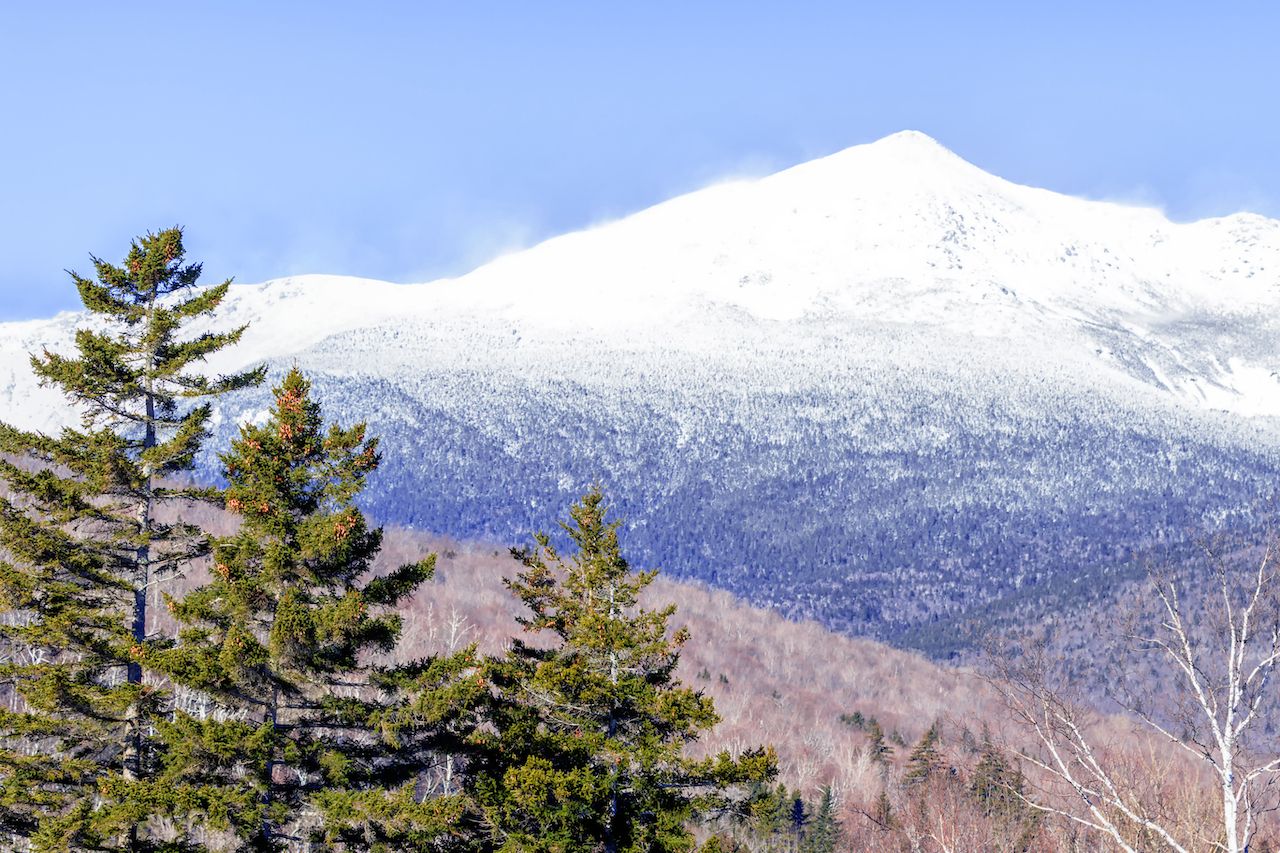 Switzerland has the Alps; New Hampshire has the White Mountains and nearly all of the tallest mountains in the Northeast. This range is the epicenter of the state’s outdoors, dominating about a quarter of its total area. From the range’s tallest point, the 6,288-foot summit of Mount Washington, you can peer into New Hampshire’s neighbors, from Maine and Massachusetts to southeastern Canada. Inside, you have your pick of all-season activities, whether you prefer gentle trails or strenuous treks, snowshoeing or hiking, riding ATVs or snowmobiles, paddling or swimming, equestrian or sleigh rides.

The skiing here deserves a mention. The White Mountains are not the Swiss Alps, but they do pack several ski resorts into close quarters, giving skiers and snowboarders the chance to see much of the range on a single trip. The largest resorts are Bretton Woods, Loon Mountain, and Attitash, all of which offer 300 or more skiable acres. When the snow melts, Loon and Attitash transform into adventure parks alongside resorts like Wildcat and Cannon, drawing a new set of visitors to their ropes courses, aerial tramways, alpine slides, ziplines, and more.

No matter the season, the best resource for White Mountains recreation is the White Mountains Visitor Center in North Woodstock. Before diving into the range, take Exit 32 off I-93 to drop by and collect all the literature, trail maps, passes, and other information you might need.

You can hike 161 miles of the Appalachian Trail. 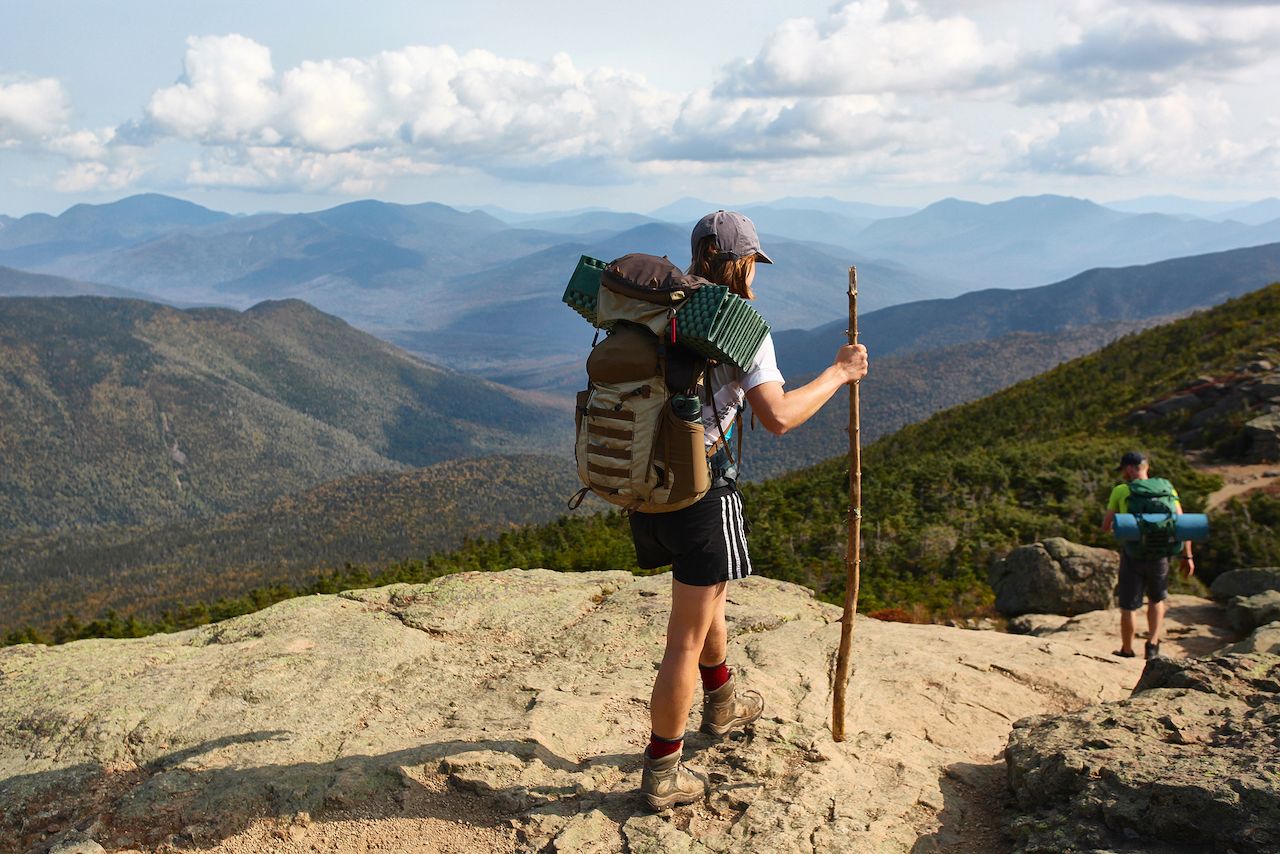 Technically, you can hike 160.9 miles of the Appalachian Trail without leaving New Hampshire.

The Appalachian Trail is a long-distance footpath that spans nearly the entire length of the East Coast, covering more than 2,000 miles from Maine to Georgia. It’s one of the longest hiking-only routes in the country. Few who endeavor to the complete trek succeed, yet an estimated three million people tackle part of the trail each year. Those who do so in New Hampshire are rewarded with the White Mountains; those who complete the state’s portion of the trail, skirting the range’s ridgeline at elevations ranging from 400 feet to Mount Washington’s 6,288-foot summit, will spend more time above the treeline than they would in any other state.

While the relative lack of tree cover opens hikers up to unparalleled views, it also leaves them exposed to the elements. The weather in the White Mountains can be notoriously fickle, dangerous even, increasingly so the higher you hike. July and August are the calmest months following June’s storms and present the least chance of snow. Hiking the AT here will still be demanding, though, and will require both careful preparation and good judgment on the trail.

It’s nicknamed the Mother of Rivers, too. 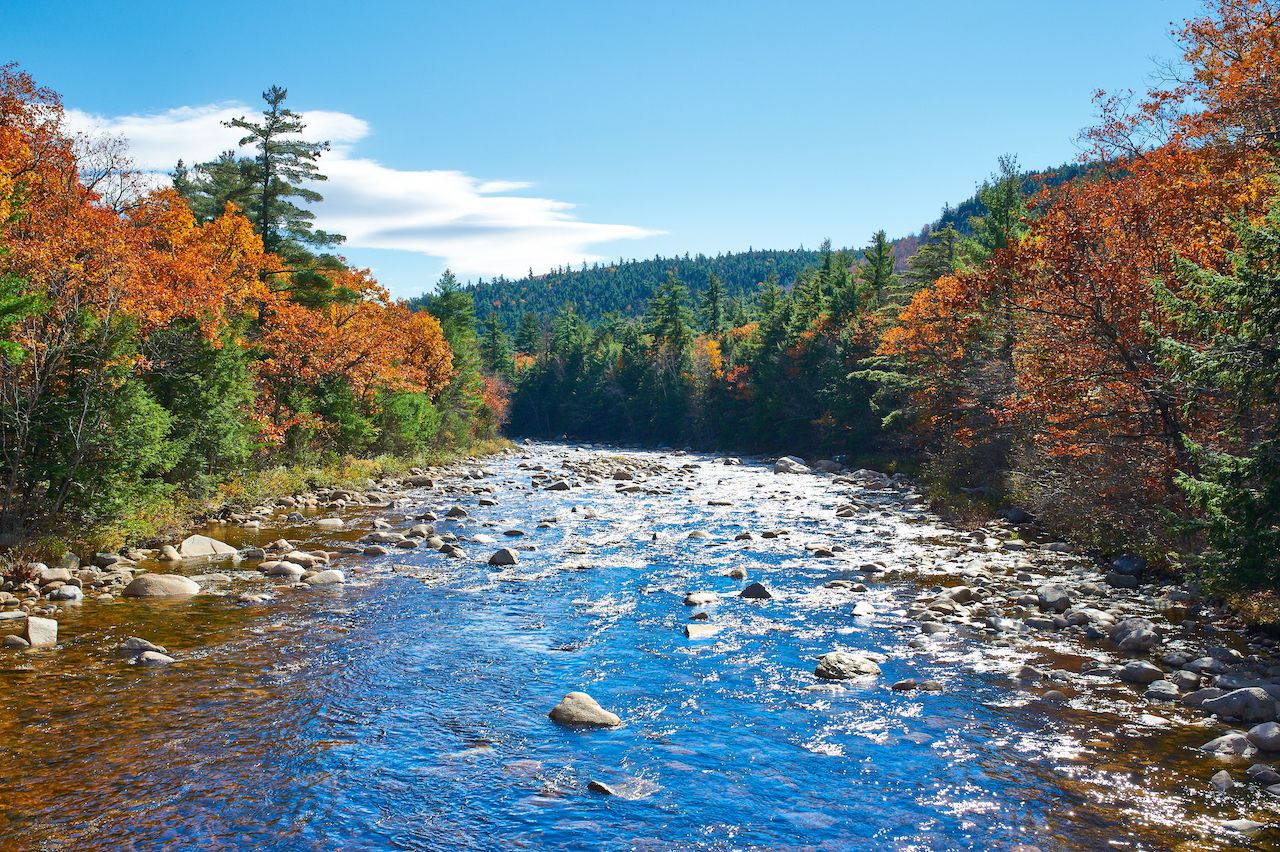 From New Hampshire’s mountains flow mighty rivers. A few have particular significance: the Connecticut River, the longest in New England at 406 miles; the Merrimack, the subject of a classic Thoreau book recounting a brotherly boat trip; the Saco, an important source of drinking water; and the Androscoggin, once used to power lumber and textile mills, to name a few.

With these rivers comes another arena for outdoor adventure, starting with whitewater rafting. The Androscoggin is New Hampshire’s most raftable river. Outfits like Raft NH host trips for all ages and abilities on its Class II rapids below the Pontook Dam. More experienced rafters can also find Class III rapids here but should look to the Baker, Ammonoosuc, Pemigewasset, or Contoocook Rivers for more challenging Class V whitewater.

Wet and wild is just one approach to the state’s rivers. New Hampshire also has a strong tubing culture, with rafting locales like the Ammonoosuc and Pemigewasset doubling as floating destinations. But it’s the Saco River most tubers choose. Several operators, such as Saco River Tubing, organize family-friendly floats along the sandy riverbank for as little as an hour and up to a full day. You might even encounter some modest rapids for the best of both worlds.

There are almost 100 state parks, from Ahern to Winslow. 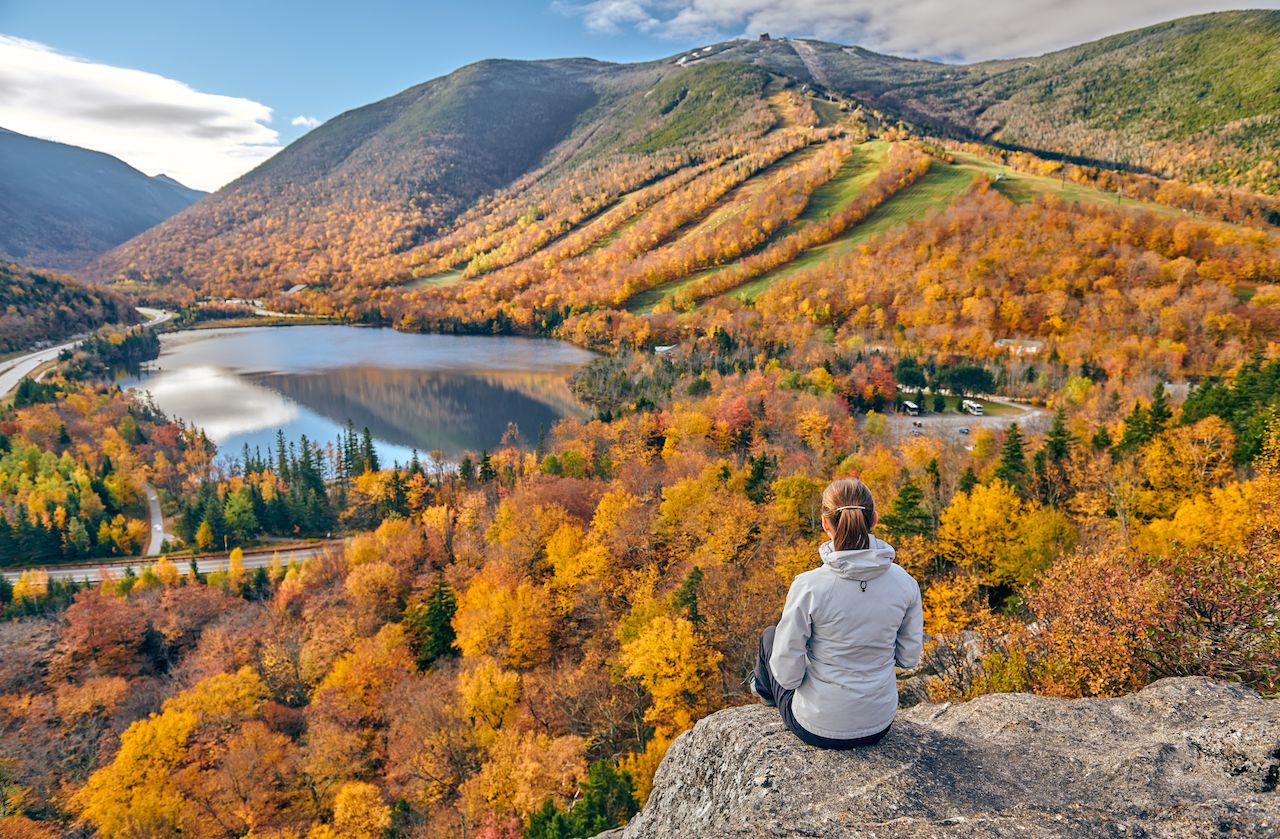 New Hampshire is home to 93 state parks. A dozen stretch across the White Mountains alone. Franconia Notch is a favorite, extending 6,700 miles from Flume Gorge to Echo Lake. Though the granite formation that helped put the park on the map, the Old Man of the Mountain, collapsed almost 20 years ago, its waterfalls, caves, and Cannon Ski Resort continue to stoke its popularity. Franconia Notch is also a hit with rock climbers and fly fishers.

Some of the finest parks in New Hampshire also lie beyond White Mountain National Forest. There’s Bear Brook, the largest developed state park, where 40 miles of trails span more than 10,000 acres roughly 30 minutes north of Manchester. Boatable ponds and two archery ranges add to its appeal. There’s Pawtuckaway in the state’s southeastern corner, which delights hobby geologists with its glacial erratics, which are large boulders formed toward the end of the Ice Age. There’s even oceanside camping at Odiorne Point and Hampton Beach. Name an outdoor activity, and New Hampshire almost certainly has a state park for it.

It’s not the Great Lakes, but the Lakes Region is pretty great. 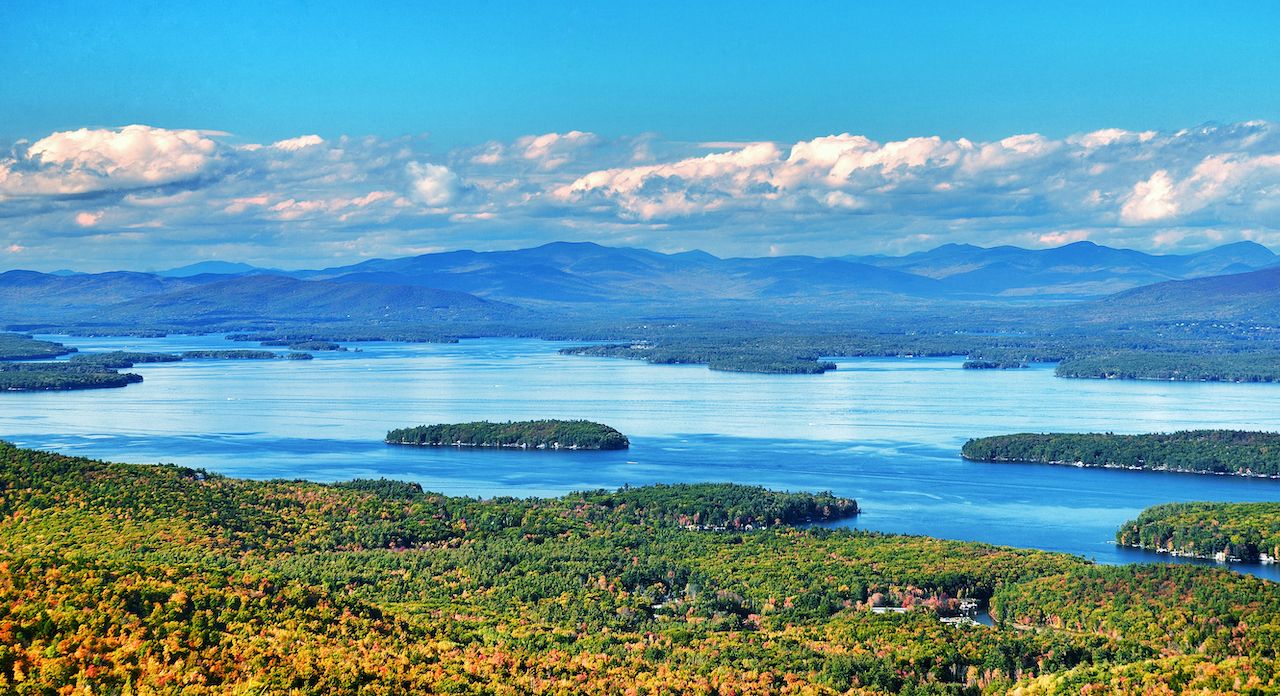 Lakes are a big part of New Hampshire’s outdoor identity. This is understandable considering there are almost 1,000 of them in the state, 273 of which comprise the Lakes Region. The region’s centerpiece is Lake Winnipesaukee, whose 72 square miles (and 253 islands) make it the largest lake in the state. All manner of year-round recreation is possible here, from swimming and water skiing to ice fishing and ice sailing, though summer is a special time to visit. The town of Wolfeboro, which sits beside the lake, even calls itself the “Oldest Summer Resort in America.”

Squam Lake is second to Winnipesaukee in popularity. There are actually three Squam Lakes at the foot of the White Mountains: Big Squam, Little Squam, and White Oak Pond, whose claim to fame is being the filming location for the Oscar-winning film On Golden Pond. Equally entertaining year-round, Squam Lake is a better choice for winter visitors, particularly if they envision themselves snowshoeing, cross-country skiing, or snowmobiling lakeside.

Though there are too many pristine lakes to name, from Ossipee to Sunapee, Newfound Lake deserves a shoutout. Called the cleanest lake in New Hampshire, and one of the cleanest in the world, spring-fed Newfound Lake is also one of the deepest in the state, plunging 183 feet down at its deepest point. Ringed by 22 miles of preserved forest, it’s the perfect place to kayak, canoe, or hike, depending on which half of the landscape you prefer as your view. 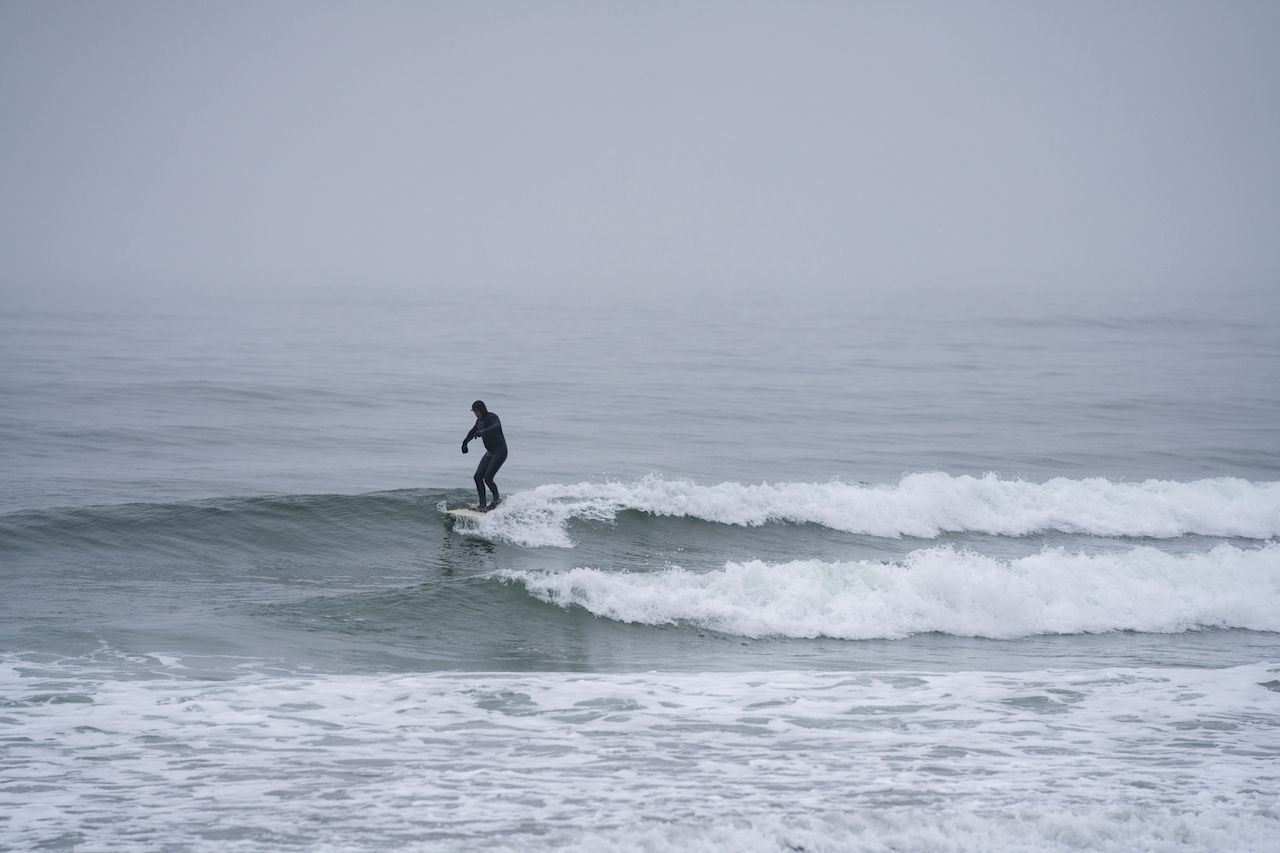 Despite its proximity to the ocean, New Hampshire claims just 18 miles of the Atlantic coast. Nonetheless, surfers make good use of the state’s shoreline. The summer months are an excellent time for beginners to test out their skills on gentle breaks, while the hurricane season that extends into fall poses a welcome challenge for experts.

If there’s one surf spot worth knowing, it’s The Wall south of Hampton Beach. The swells here tend to be bigger than elsewhere in the state, particularly on windy days, giving surfers something to celebrate when a nor’easter hits. Other spots worth noting are Rye on the Rocks, an exposed reef break near the town of Rye, and milder Jenness Beach a few minutes away.

You can roller skate on the JFK airport tarmac this summer

The most dog-friendly cities in the US, according to Zillow and Rover