Now reading: Savannah, Georgia, is a perfect Amtrak starting point for those looking for an East Coast escape
Share
PrevNext

The Silver Meteor pulls away quietly from the modest Savannah, Georgia, depot, just as it always did, before the isolation, before the pandemic.

This is Amtrak’s southbound 97. Savannah is the approximate midpoint between Boston and Miami. The tag on my bike headed for baggage reads MIA. I’m hoping that means Miami and not “missing in action.” We’re heading to Hollywood, Florida. During the ride I find out from a very congenial car conductor, Mr. Appleman, that bikes cannot be unloaded in Hollywood. Someone goofed when we made the ticket. We make an adjustment. I text my friend to meet us in Ft. Lauderdale, Florida.

We joke around with our conductor. “Mr. Apple-man, meet Miss Fish-man.” Later, Mr. Appleman would call to say we left a book and a return ticket in the netted pocket of the seat in front of us. He would leave the book for us with Reuben or Deloris in the Savannah station. We could get a new ticket electronically. No penalty.

That’s a train, for you. Room for humanity, room for personality. 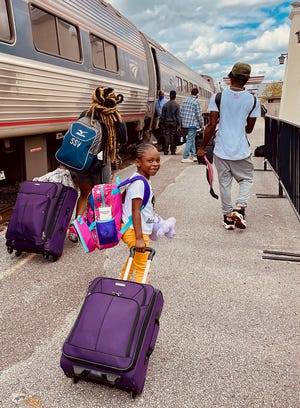 “Kissimmee? Anyone getting off in Kissimmee? Last chance.” This from another conductor, his white curls tucking behind his collar. “Don’t forget your phone chargers. We have plenty of chargers in our lost and found.”

Later, to replace the forgotten book, we would find a most extraordinary antique book store, William Chrisant & Sons’ Old Florida Book Shop, with rugs, narrow aisles, tall shelves and chandeliers on a most ordinary strip mall in Ft. Lauderdale. It’s sandwiched between and around the most banal of businesses notwithstanding a strip of four Vietnamese restaurants across the trafficked street, including 545 Banh Mi Café, which is now hiring (“Sandwich artists and prep cooks”).

We eat like we’ve never eaten before, so tired are we of the home-cooked meals we bragged about over the past year and a quarter. Should it be Peruvian, Romanian, Greek, Ethiopian, Salvadoran, Korean?

First-time train travelers are surprised at the affability of the conductors. “Where you headed, young woman?” they ask. “Winter Park? Two cars to the right.” They take your arm and guide you onto the four steps of the yellow stepstool into the car. They lift your walker. They hoist your suitcase, too. As the conductor shuffles a stack of paper, making marks with his yellow pencil, it seems unorganized, so 20th century, so analog. Somehow it works. People step up, find a seat of their own choosing and settle in.

“Abuela, abuela,” a young toddler says pointing to me. Grandmother, grandmother. Yes and no, I say. Her mother apologizes. No need. We’re waiting in line at the snack bar. Only credit (or debit) cards at the snack bar. No cash since COVID. Best to bring your own food anyway. Most people do. No dining car on Amtrak’s Silver Service. Too bad. The coffee is decent; the microwavable food not so much. Mr. Appleman says he always travels with carrots.

In Orlando, Florida, when we could get off the train for a “smoke break” while some 89 people line up to take the No. 98 northbound train, another line formed around a hot dog stand. There should be more food trucks at stations, if you ask me.

Amtrak is serious about the mask mandate. (The federal mandate for masks on transpiration and at transportation hubs was extended until mid-September.)

“If you’re not drinking or eating, please wear your mask,” the conductors announce and repeat as they patrol the aisles. There’s a proper way to talk on the phone, too. “You have to have a headset,” he instructs one young man talking (forever) on his cell.

If you ever thought the borders between states are arbitrary, think again. As soon as we cruise into Florida at a civilized 79 miles an hour and pass small houses hidden behind twisted trees, gnarly vines, bald cypress, curving canals, mangrove roots, tulip poplars, the textured sea grapes, tipsy boats and cars with raised hoods, it feels different. Who can notice those things from a car? In South Florida, there are more varieties of palm trees than I knew existed. Blooming frangipani are common; so are the blue plumbago, the royal poinciana, the vibrant croton.

But a few days later when we pulled into Savannah, it was to the blooming magnolia trees. I know they have them in Florida but somehow they seem sweeter in Savannah. I know they have Cuban restaurants in South Florida too, but with all those other choices we never got around to it, which is why we put in an order to Rancho Alegre as soon as we detrained. We picked it up on the way home.

Airfare of the Day [Business Class] SINGAPORE AIRLINES Amsterdam to Bangkok from 1,380€