Now reading: Rhode Island is home to the best squid in America. Here’s where to try it.
Share
PrevNext

ALL OVER THE United States, pubs and casual American-fare restaurants feature deep-fried, golden battered rings of calamari on the menu — usually served with a side of marinara sauce. Calamari is almost as ubiquitous as French fries in many coastal cities, and it’s usually reliably satisfying. It’s also often a little bland. Yet this somewhat lackluster association that most Americans have with calamari doesn’t tell the whole story of the dish. To understand calamari’s true potential, you need to eat it in Rhode Island.

Rhode Island is the unofficial “squid capital of the world,” at least according to the Providence Journal, which cites a Cornell University study that found that more squid is harvested in the state than other types of seafood. The Journal also reported that the Ocean State brings in 54 percent of all the squid harvested in the Northeast. In 2019 (the year before COVID hit) Rhode Island landed 27,213,341 pounds of squid.

Clearly, squid is just as fundamental to the state’s economy as it is to the diet of Rhode Islanders. It’s easily Rhode Island’s most valuable fishery. That doesn’t mean Rhode Island squid always stays in the state from catch to plate, though. Most of the squid caught off Point Judith off the coast of Narragansett is shipped to China, processed in factories there, and then shipped back to Rhode Island, giving it an unfortunately huge carbon footprint. However, there are some companies, like Town Dock, that process squid catches locally.

With all this in mind, it’s no wonder that calamari was named the state’s official appetizer in 2014. Longfin squid — the most common variety you’ll see used in Rhode Island calamari — is tender and sweet in flavor. The signature Rhode Island calamari recipe is simple but pretty standard at restaurants across the state: the squid is sliced into rings, breaded, pan-fried, and served with hot peppers and a garlic butter sauce on the side.

It’s been a tradition to serve calamari this way in Rhode Island since at least the 1950s, when a surge of Italian immigrants arrived in the state. Brendan Read, chef and owner of Celestial Cafe, in Exeter, remembers growing up in the state at a time when the only restaurant options available were either Italian or American. 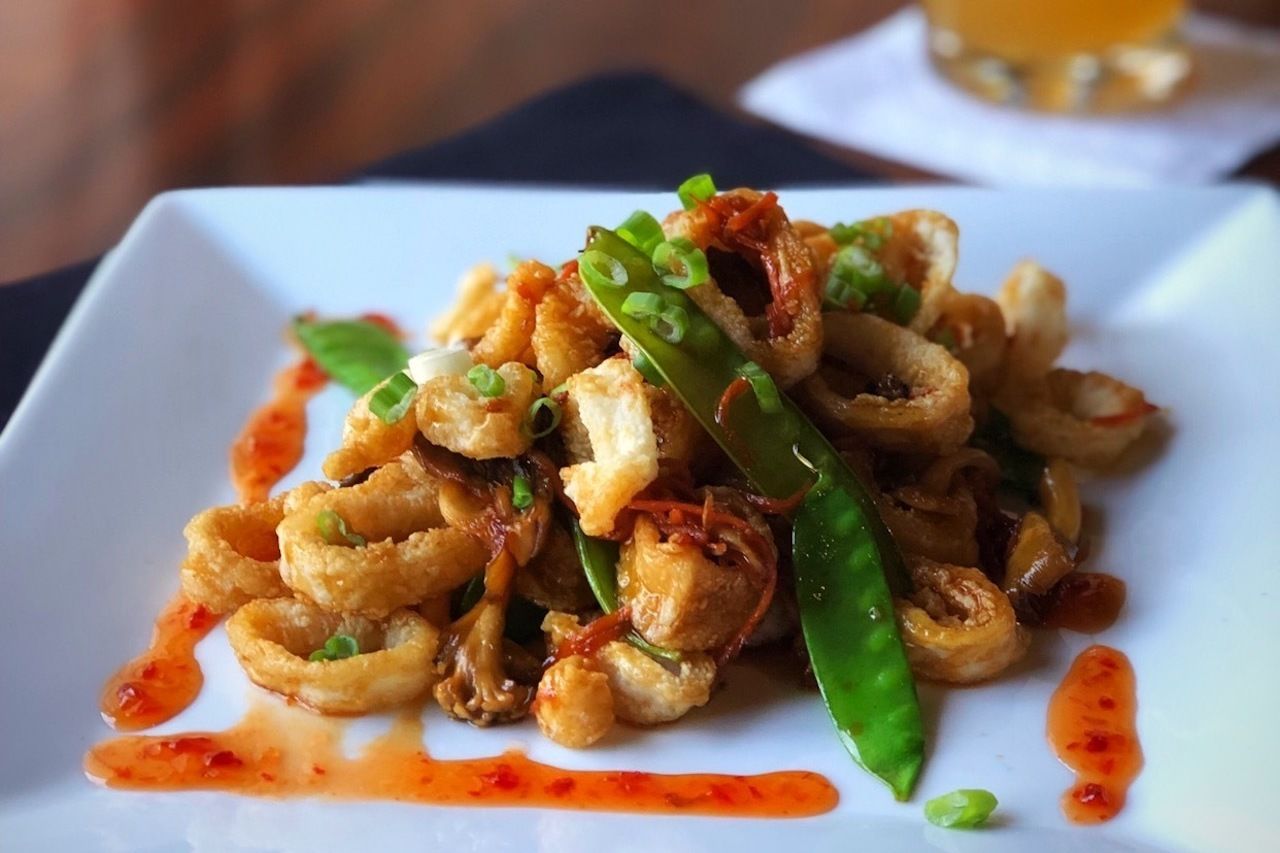 The simple calamari preparation at these restaurants was, and is, due to quality as well as tradition. Thanks to cold waters, the squid fished off the state’s coast is higher quality.

“It’s all in the waters here,” Read tells me. “The temperature of water works on the consistency and texture of the calamari. With warmer waters it’s actually a tougher product. [Rhode Island] calamari is totally different. Our calamari is much more delicate.”

The actual fish flavor of the squid is light, so the appeal of calamari, according to Read, is really twofold. The first aspect is that squid absorbs and holds flavors exceptionally well. The second is arguably much more important: Longfin squid retains its tender texture even when fried.

“It stays a little moist in the center, and it’s crunchy on the outside. It’s just beautiful and tender,” he says, reverently.

It’s no secret that in an era when food blogs and Yelp reviewers proliferate, more and more people are taking trips and traveling across the country just to sample the US’ many regional cuisines. In New England, perhaps the most popular stop is Maine for it’s famously buttery, succulent lobster rolls. But Rhode Island has made a mark as an attraction for food enthusiasts in a similar way thanks to calamari.

“We do see people traveling around Rhode Island just for the food,” Read says. “People come here for three things: stuffies [stuffed clams], chowder, and calamari.” Every summer, he encounters tourists who tell him that they’re in town to try “all the calamari we come across in Rhode Island,” especially around the time of the annual Rhode Island Seafood Festival.

Read says the calamari industry took a “giant hit” during the pandemic for a confluence of reasons. First of all, there was no one to buy the squid that were hauled to shore with restaurants closed. When takeout orders picked back up, very few people opted for calamari because it loses the texture that makes it so desirable on the trip to your door. It also sold poorly at grocery stores because it’s difficult for the amateur homecook to prepare properly. But Read thinks those days are finally in the rearview mirror.

When Rhode Island went back to full capacity, Read says, “It was like turning on a light switch. I’m trying to keep up with the amount of customers coming in. I have a feeling everything’s going to bounce back pretty quickly as long as we can stay safe.”

Now is the time to get a taste if you haven’t already — or to dive back in if you’re already familiar with the joys of Rhode Island calamari.