Now reading: Greece, a hike to a mystical cave is as cool as the ruins
Share
PrevNext

UPON ARRIVAL IN DELPHI, Greece, it’s hard to shake the sense that, if the world has a center, it might be right here. This was true, at least according to Zeus, who discerned this through the flight of two birds (Greeks knew Earth to be round). No doubt, Apollo accepted this conclusion when he decided that the location for his Temple would be in Delphi, today a small village in the foothills.

On a hot June day, the Greek sailors of Itea, a coastal village less than seven miles from Delphi, were said to be fishing for mackerel. As the sun bore down on their sweat-slicked shoulders, a dolphin — the Greek word for which is “delfíni” — soared up from the Mediterranean waves and plopped itself onto the deck of their ship. Not only was this dolphin clearly capable of an impressive vertical leap, but it also seemed to have a considerable command of the spoken Greek language. Which, even in 750 BC, was an extraordinary occurrence, and a dead giveaway that a god had come to call.

The legend continues: Apollo, speaking in his Dolphin form, told them to build a temple near there, in the navel of the world. If they did, he would ensure they have all the riches and food they would ever need. The sailors complied, collected donations, and crafted marble into one of the country’s most unsurpassed temples.

The now-ruins of this magnificent temple are why this small town at the foot of Mt. Parnassus draws tourists. That was why I had come. But I discovered something more wondrous on that journey. Now, I will always remember Delphi as the trailhead for the hike to the sanctuary of the gods: Corycian Cave. 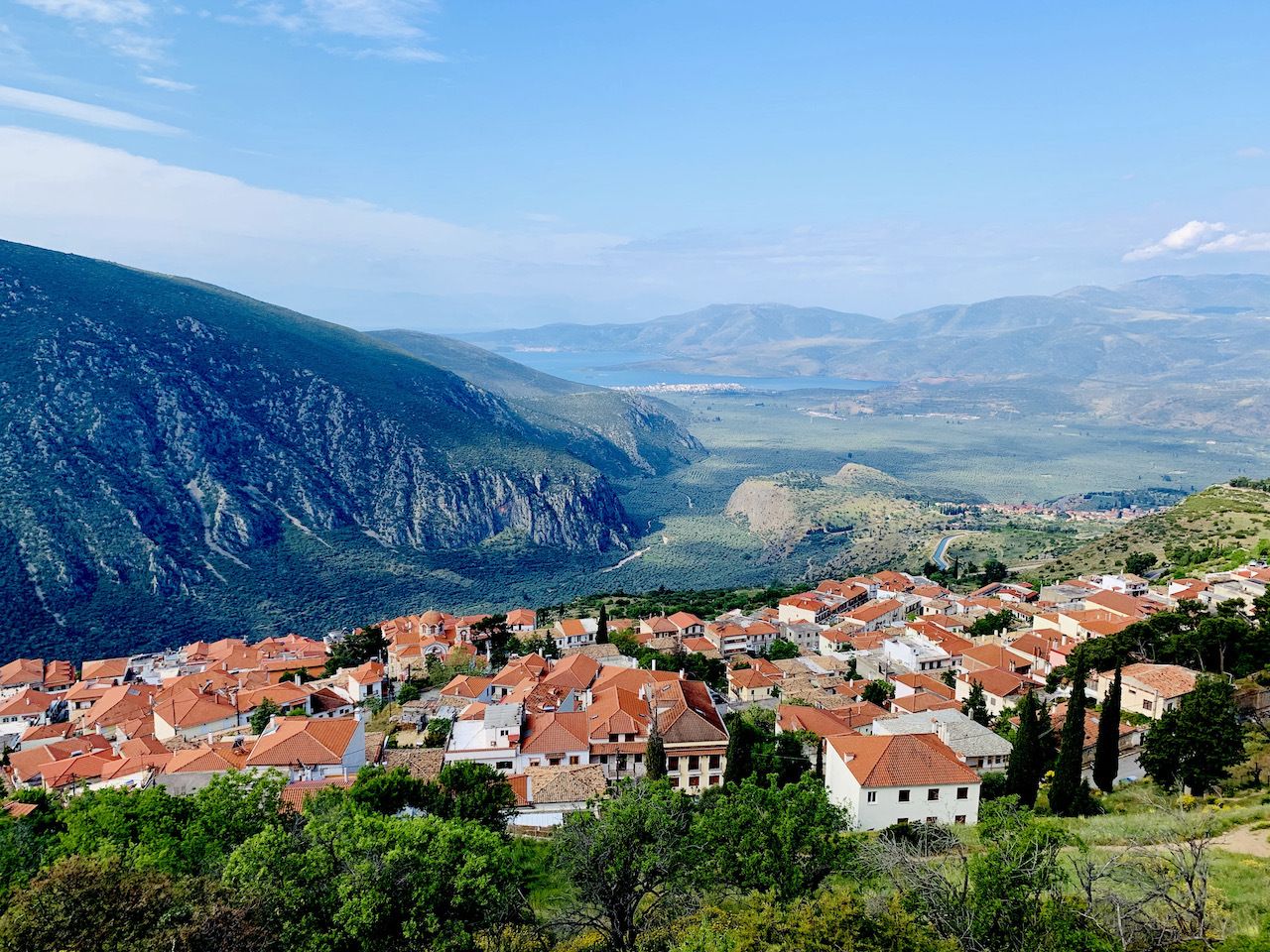 Delphi is very accessible to the average traveler, both by car and public transit. It is about a two-and-a-half-hour drive north of Athens on the Lamia highway, towards the snow-capped peaks of Parnassus. I arrived by bus, taking one of the many affordable options offered by KTEL buses that depart regularly from Athens’s city center.

Right off the bus, we sauntered along a cliff’s edge, through tallgrass that muffled the stone gymnasium that lay under our feet — a place perhaps used as a training ground by the first Olympic athletes. We found ourselves at the ruins of Athena’s temple, its fragmented remains maintaining a bearing both mystic and wise. From our elevated location, we peered through the deep valley below to see the sun duck into the blue Mediterranean, shimmering the last of its warmth onto the seaside towns of Kirra, Galaxidi, and Itea.

Come for the ruins; Stay for the trails 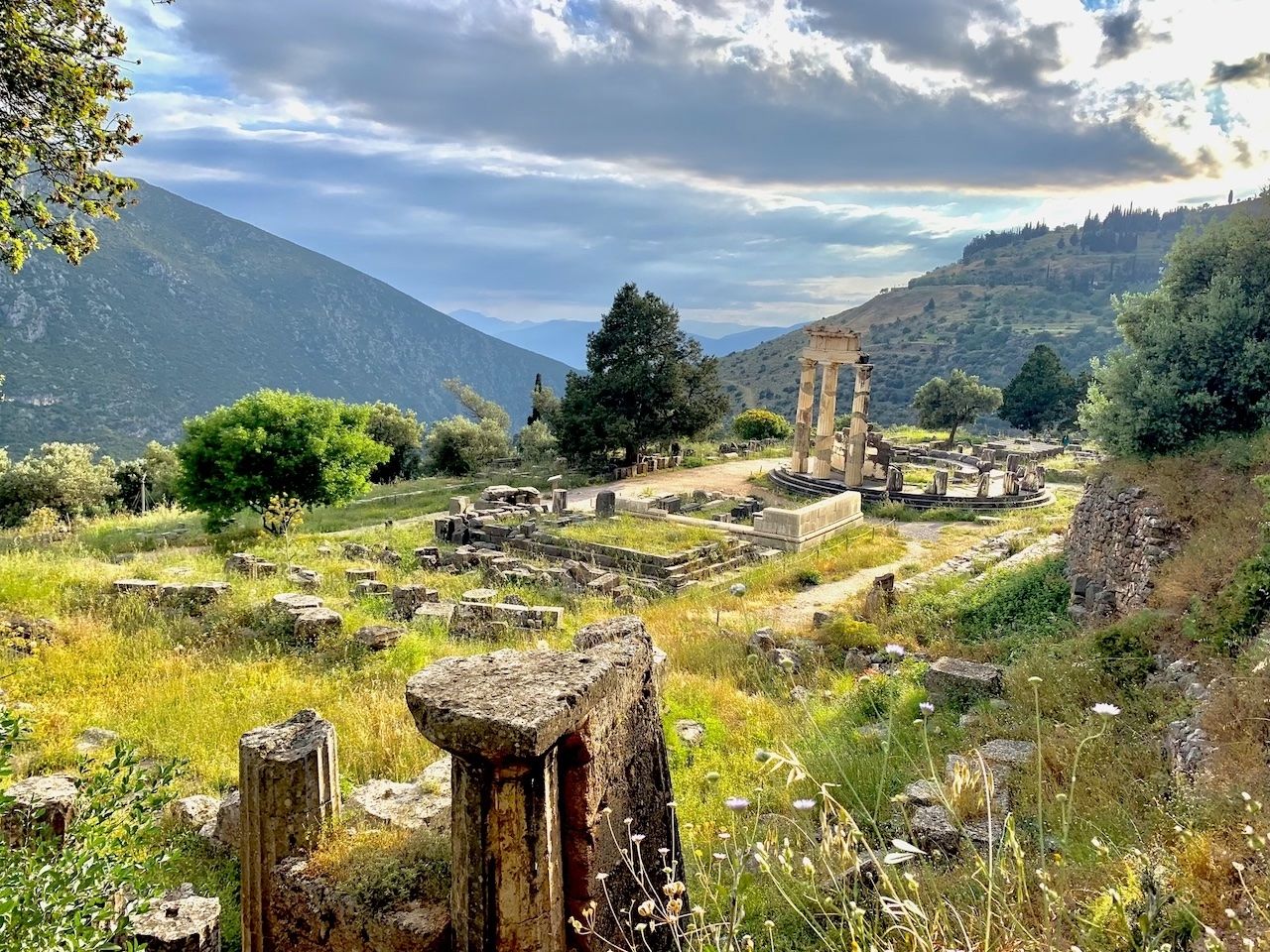 We bought a pass to explore the museums and ancient ruins of the area. As students, we received a reduced rate of six euros, half the price of a regular ticket. We sauntered through the great marble skeletons that surrounded the Temple of Apollo until finally arriving at the temple itself. It stopped me in my tracks. We suddenly became drenched in the ether of Apollo; in light and sun and harmony and all things he represented. I was lost in this ineffable moment, until a voice floated in.

“You must walk well above the temple, my friends,” we overheard a tour guide say, “so that you may view the wonder of this ancient temple from above, but only so you may see it as a part of the phenomenal natural world that is dedicated and credited to Gaea, mother of all. Never forget my friends: out here, Gaea rules all.”

Upon hearing this, we booked another night at our accommodation — one of the small, charming inns that fill Delphi — and spoke to some locals about the trails up the mountain. It was then that we learned about Corycian Cave.

The trail to Corycian Cave 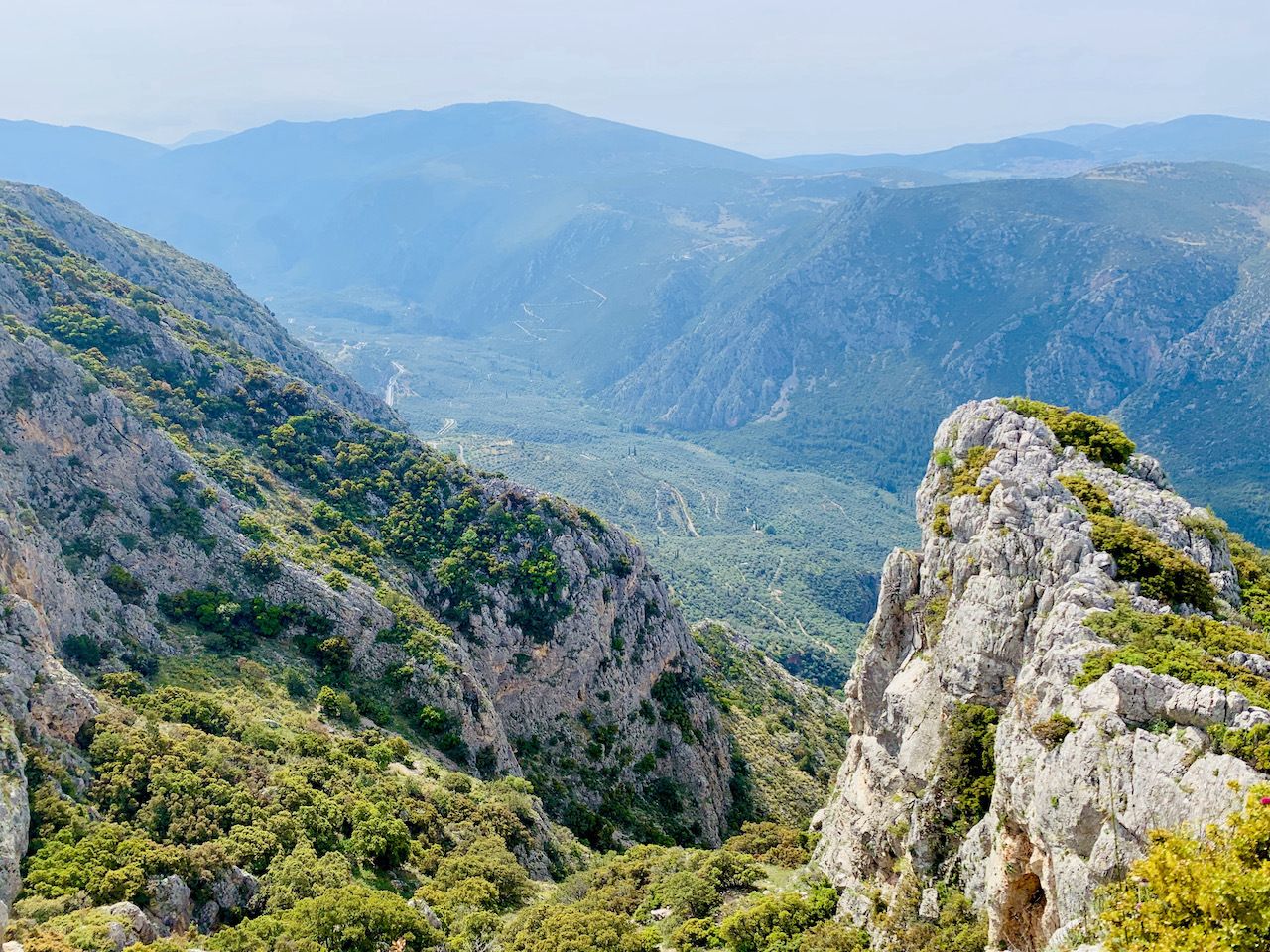 Corycian Cave feels like a well-kept legend. We found no map online. Directions were provided by a local jeweller, scratched onto a blank white page. The cave is 4300 feet above sea level. The trail itself is about six miles each way and takes about 7-8 hours as a round trip. Although you can fill up your water bottles along the way at two springs with potable water, ensure that you bring enough food to keep you going all day. As you plan your journey, make sure you grant yourself ample time to explore and experience the cave. I found it hard to pry myself away from it.

The trail begins at the northernmost and highest road of Delphi. The trailhead is among tallgrass and wildflowers but can be identified by the yellow diamond that reads “E4.” Some of this ancient path has been incorporated into the E4 European Long-Distance Trail, a mega-trail that stretches from Tarifa, Spain, in the west all the way to its eastern terminus in Cyprus. Keep careful look out for these yellow diamonds to confirm your way for the first two hours of the hike. They should appear once a kilometre (or .6 miles), but some have been draped in moss and may be hard to spot.

After winding through tallgrass, the hums of the nearby bee farm will start to fade and you will arrive at an ancient zig-zagging cobblestone path. As you climb your way up, you will be treated to magnificent views of Apollo’s Temple and all of Delphi’s antiquity. As you climb higher, the azure hues of the Mediterranean’s Adriatic Sea will try and persuade you to linger — but pushing forward is well worth it.

Splitting off from the E4 European trail 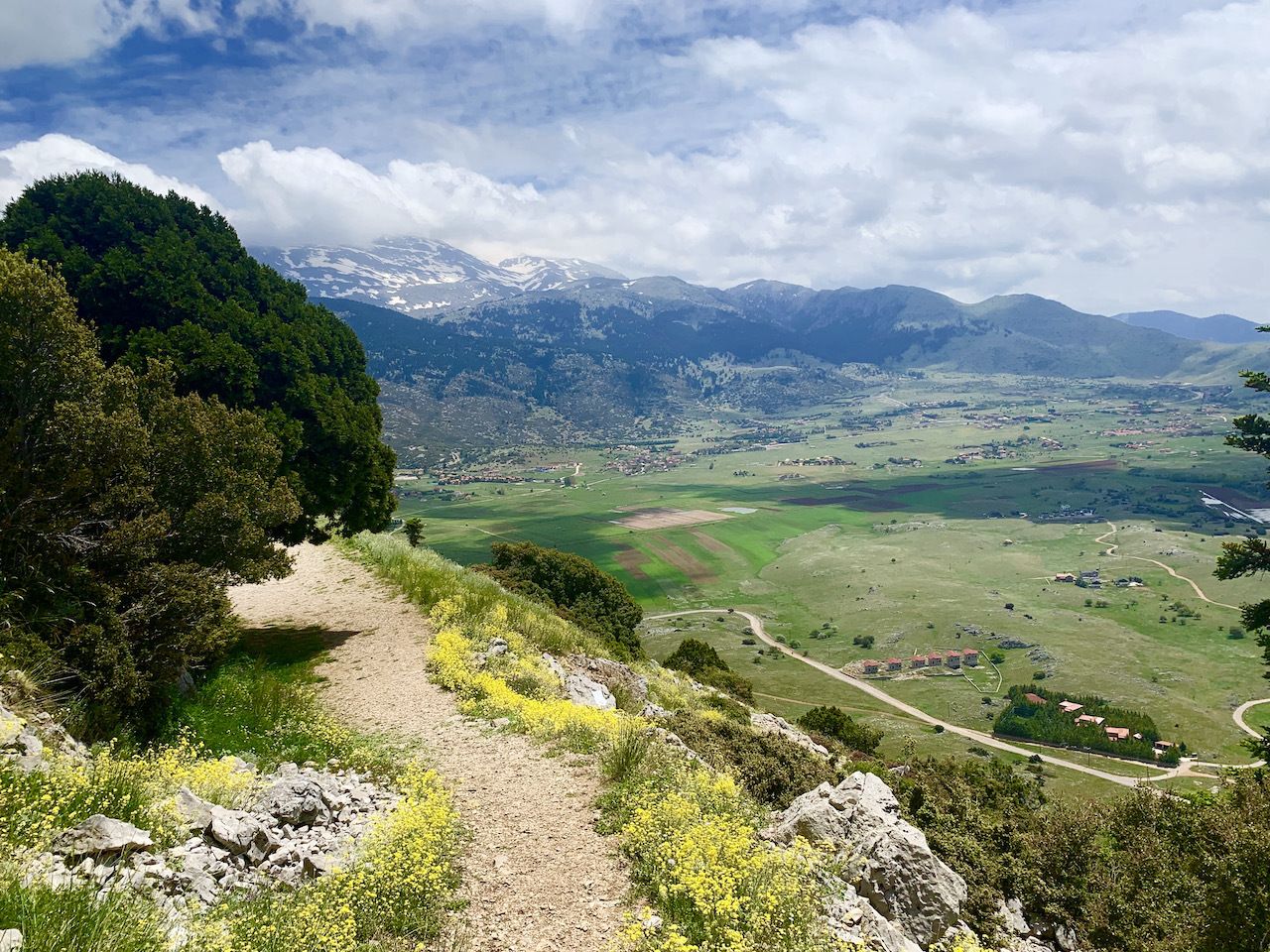 Once you arrive atop the cliffs, the trail flattens, and you will have reached Kroki Spring. Drink up and fill up. Then, look up. Far in the distance, you can see the tallest peak of Mt. Parnassus, soaring past 8,000 feet in altitude, in all its glory and myth.

Your path now diverges from the E4 European Long-Distance Trail. Instead of yellow diamonds, follow faded red markings painted on the ground and trailside rocks. Head to the right of Kroki Spring and the small stone chapel. As you follow the trail you’ll pass some summer cottages. Don’t worry, you’re not trespassing. The owners of one quaint farmhouse we passed even offered us some freshly made cheese.

Not far along, you’ll merge with an asphalt road that moves through a forest of fir and, in a little over a mile, joins with a dirt road. A few hundred yards down the dirt road you’ll see Pangia church, where you’ll find another fresh spring with drinking water. Keep following the dirt road past the church but keep an eye out on the left of the road for a sign reading “Corycian Cave” in English and Greek – signifying that you’ve reached the trailhead for your final trek.

The last twenty minutes of path is craggy and steep. As you scramble up a rocky trail, lush green bull pastures at well over 300 feet of altitude take your breath away. (Perhaps it was the climb, but I like to think otherwise).“How much farther!?” my hiking mate asked, gulping at our water.

Twenty seconds down the path, I turned a corner and exclaimed “Ah! Here it is!”

I love those moments. 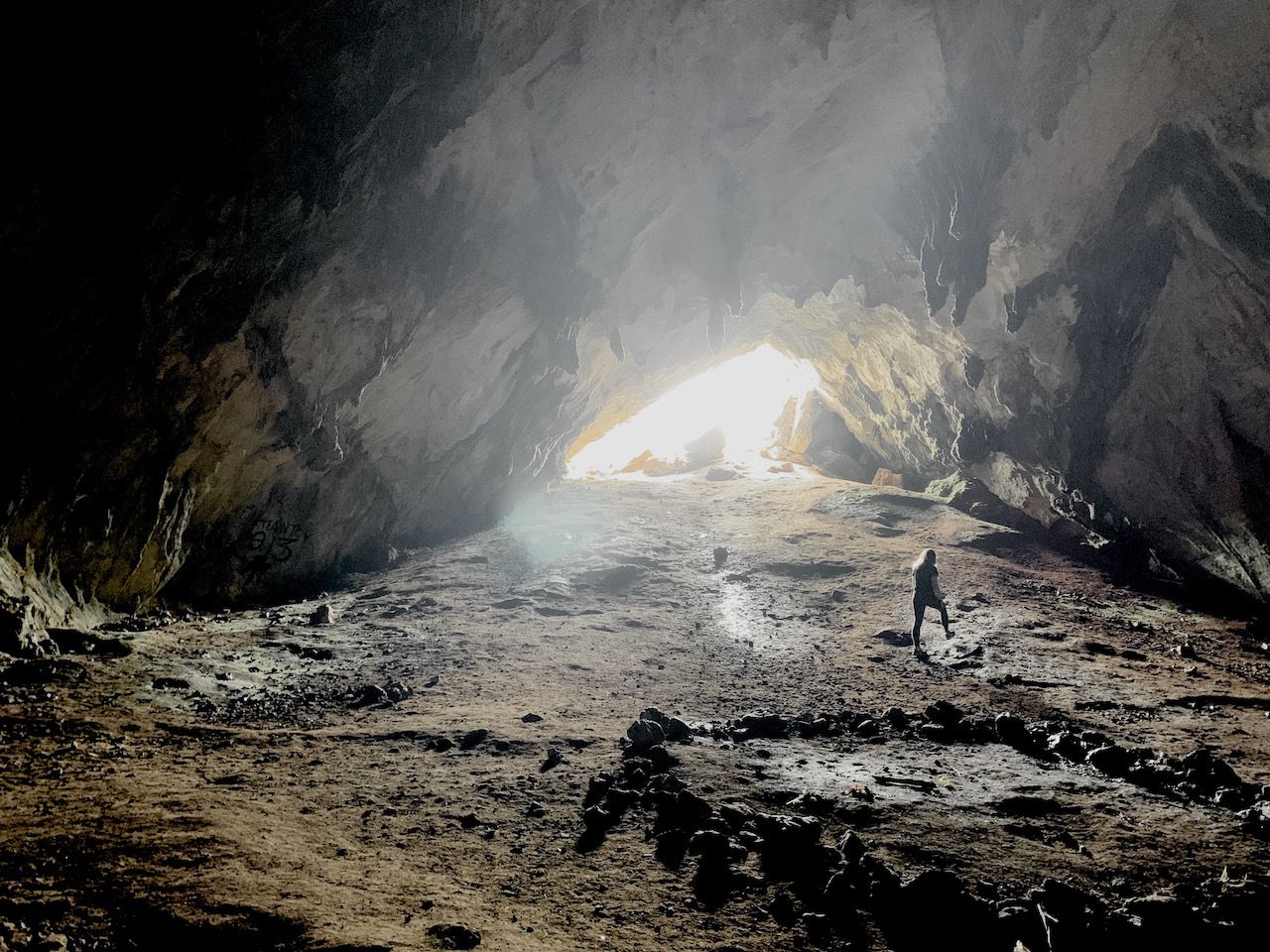 We had made it to Corycian Cave by midday. We took in the magnitude and inviolability of the cavern with wonder and humility. I cannot say how long we stood there, watching the sun’s light dance through the lips of the cave, as if provoking the hungry darkness.

Then, without saying a word to one another, we entered.

Following the sunlit mossy grotto near the entrance of the cave, was a large black wall face that appeared barren.

“Many parts of the cave have not yet even been dared to be explored by humans,” we learned later, from a local. It made sense. The cave was much larger than I had expected, leading to places where the sun could not follow.

Once our eyes adjusted to the darkness, we noticed a rope, drenched in milky mud, dangling from the top. Hikers can go as deep as they dare. I could not help but wonder what strange things creep in the dark places of the world. We were grateful to have brought our headlamps.

The deeper we got, the thicker the air became. Stalactites skulked from the ceiling and stalagmites rose from the floor around every opening. Fuzzy black bats harbored in every nook. Glowworms occasionally peeped out for a second or less, until a rock echoed and spooked them away. About twenty minutes into the cave, the only way to go was through a claustrophobic crawl path. After a careful advance, I could see it went on in the same way as far as I could discern. My stomach grumbled. Sandwiches seemed to call louder than adventure at this point and we made our way back through the darkness.

Centuries ago, worshippers of Gaea, and those turned away from the Oracle of Delphi, would walk this path with reverence. The cave is mythically the winter home of Pan, god of the wild and shepherds. Pan, in this very cave, is said to have hosted Gaea while she mused on her union with the Titans, and to have provided sanctuary to the Corycian Nymphs, the namesakes of the cave.

We felt entirely alone, in this place so marked by the gods that all else seemed to recede — a rare experience for a traveler.

We had no sightings of nymphs, nor Gaea, nor Pan, yet the Corycian air was not that of a stifled cave. It felt hallowed. As I stood where gods once had, exhausted and proud. I understood, for the first time in my life, the meaning of worship.