Germany lays claim to some 12,000 castles. During the Middle Ages, every king, prince, earl, and bishop had their own turf to protect and name to memorialize; a thousand years later, their legacies live on in these structures, some still impeccably ornate, others more akin to ancient ruins.

To make it easy on today’s castle-hunter, designated routes connect these hard-to-believe sites, with equally opulent palaces, abbeys, and monasteries usually a stone’s throw away. Memorize your Ludwigs and Ottos — here’s how and where to dive deep into Germany’s royal, fairytale past. 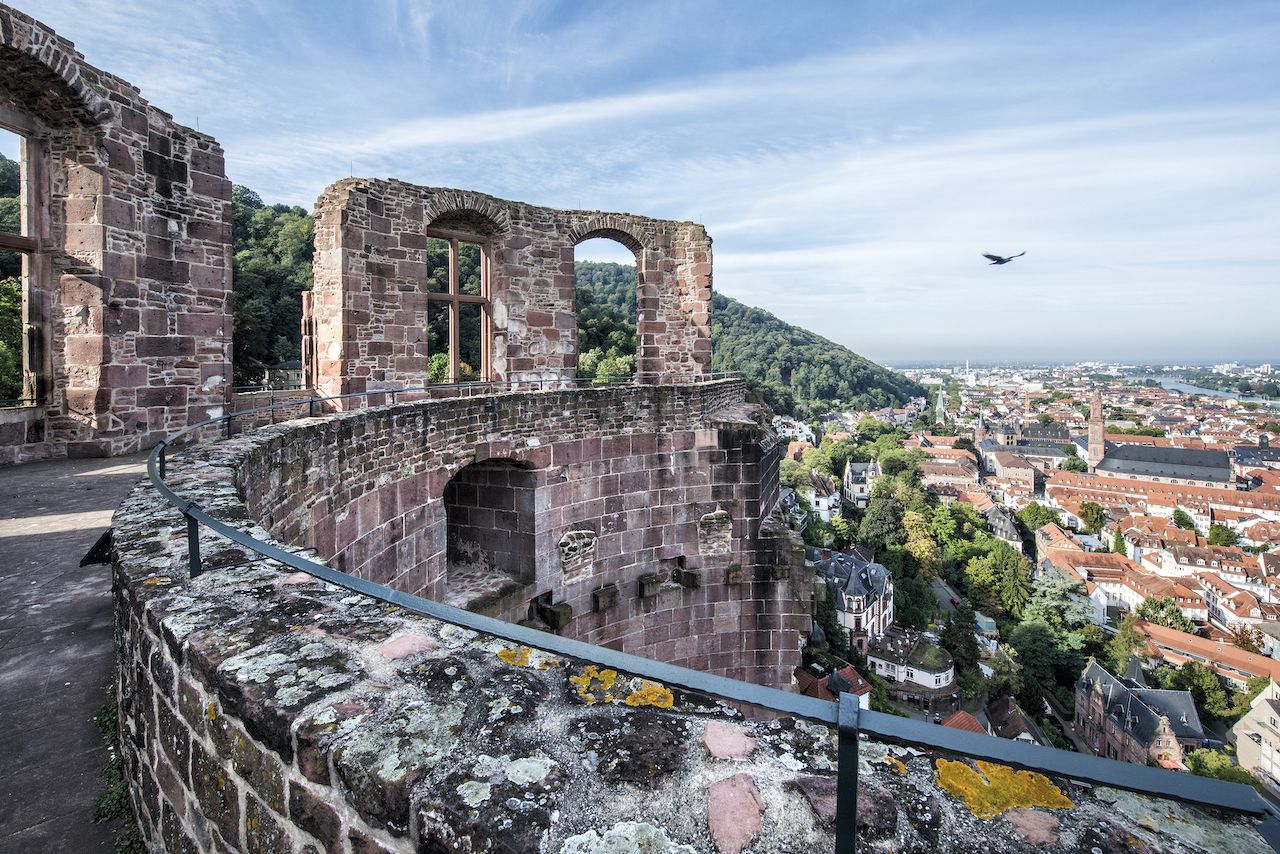 Germany isn’t exactly short of castles and palaces in any part of the country, but the dedicated Castle Road connects some of its finest. Stretching all the way from Mannheim, in Baden-Württemberg, to the Czech border, there are over 70 castles to visit in total — including big hitters like Heidelberg, Nuremburg, Guttenberg, and Ehrenburg.

Expect plenty of historic abbeys, cultural sites, and museums to traipse through as well, along with dazzling countryside vistas and eye-catching towns that rival the castles themselves: Auerbach, Nuremberg, Bamberg, Rothenburg ob der Tauber, Bayreuth…you get the picture.

Along the way, you’ll embark on a wide range of activities beyond castle-hunting: go for a ghost walk, attend a music festival (like the annual Richard Wagner festival), and scope out as many medieval markets as you can muster. For the ultimate in fairytale experiences, stay overnight in the Colmberg Castle, where the rooms combine authentic historical detail and furnishings with contemporary design flair. 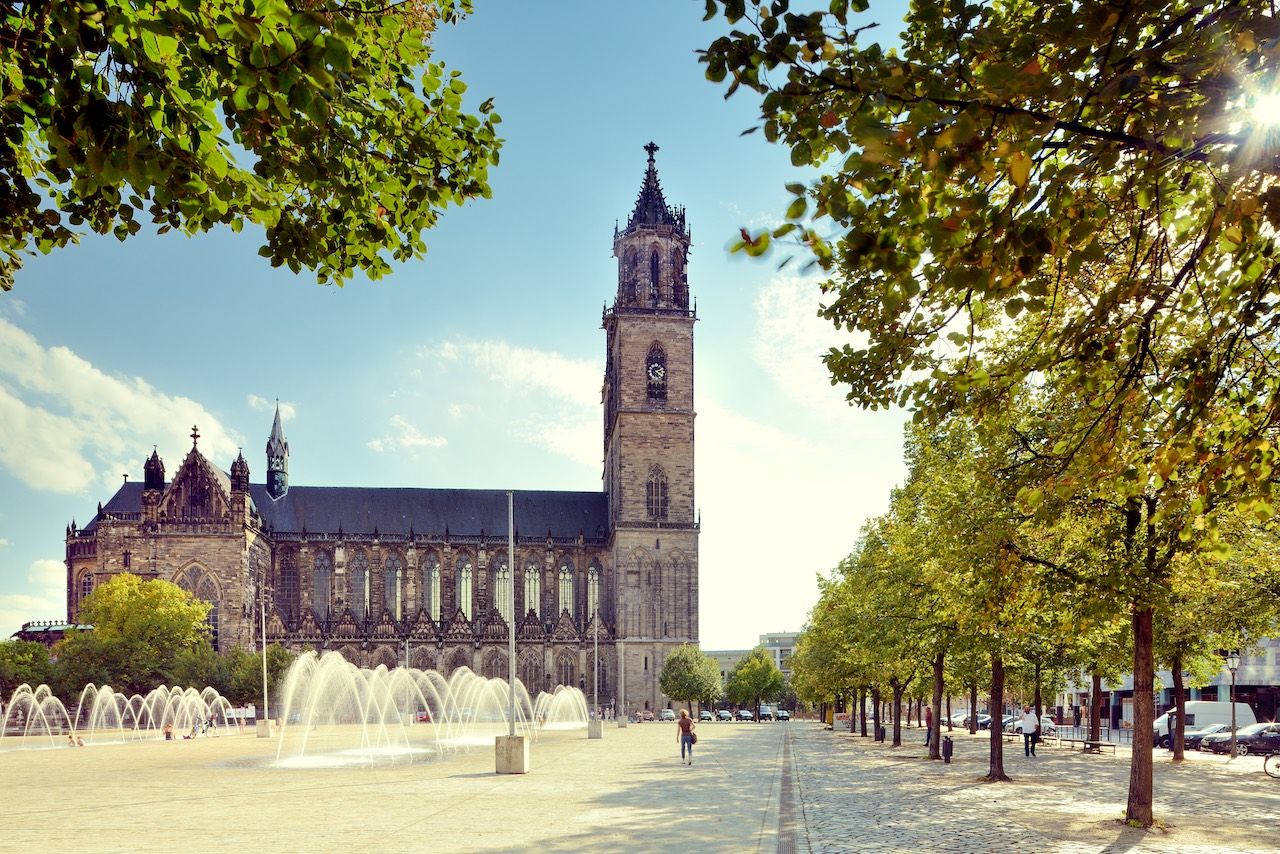 The German state of Saxony-Anhalt is famous for Otto the Great, who consolidated the Holy Roman Empire of the German Nation in 962 BCE. The 750-mile Romanesque Route follows in the footsteps of Otto and his descendants, showcasing the region’s impressive natural and cultural offerings along the way. It takes in the majestic Harz mountains and the winding River Elbe, historic cities and charming smaller towns, a bevy of medieval sites, abbeys, castles, half-timbered houses, and monasteries — like the must-see Jerichow.

Of the various highlights, it’s worth stopping to inspect the cathedrals and their associated treasures, especially in Naumburg, a UNESCO Heritage Site; Merseburg, where the cathedral doubles as a cultural history museum; Magdeburg, where the tombs of Otto the Great and his first wife, Editha, can be found; and Quedlinburg, home of the Collegiate Church of St. Servatius, the ancient St. Wiperti Church, and the Convent of St. Mary. The route also forms part of the larger Transromanica European Cultural Route, via which fans of the Romanesque era can continue to explore through Austria, Italy, Spain, France, Portugal, and Serbia. 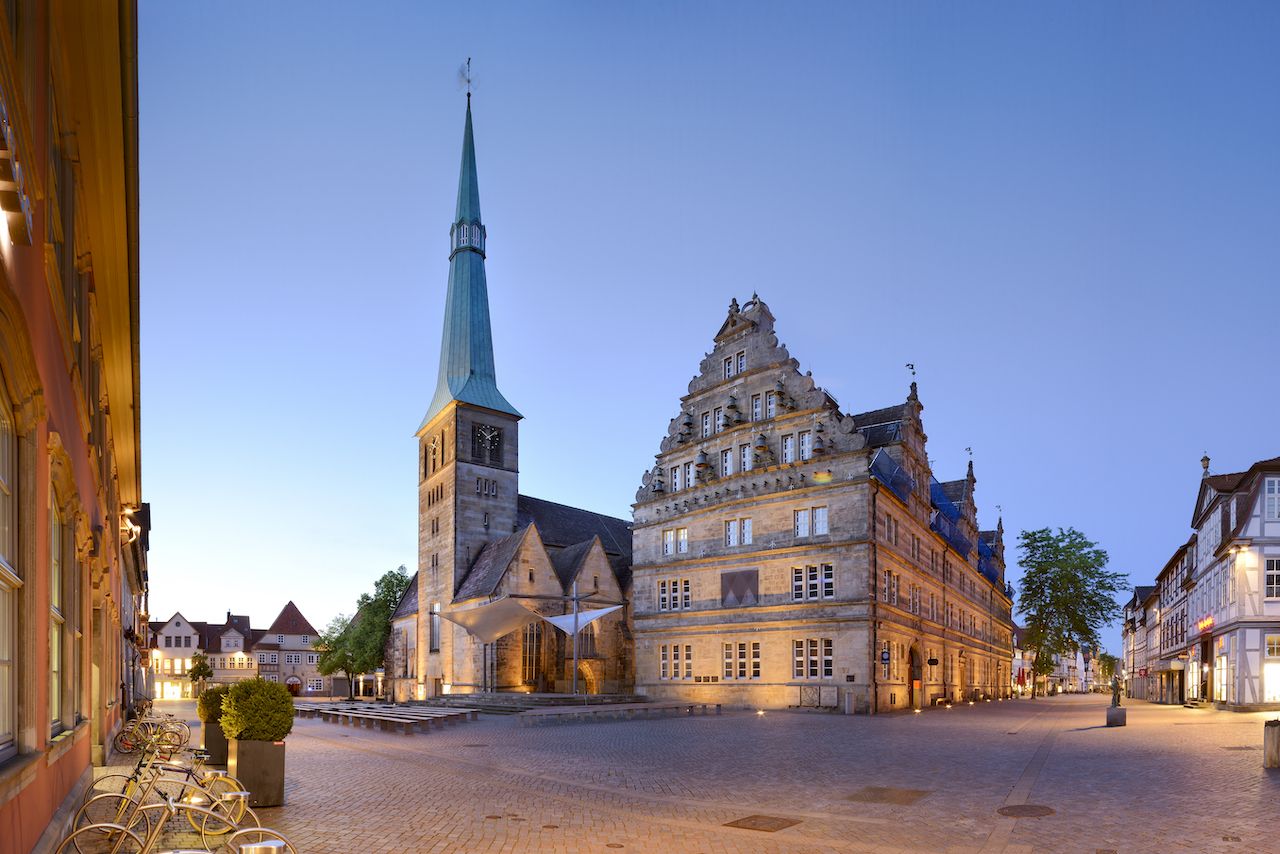 The Brothers Grimm are colossal cultural figures in Germany, and the German Fairytale Route — a 370-mile trek from their birthplace, Hanau, to Bremen — pays fine tribute to them. It visits many places directly relevant to their famous children’s stories, including the cottage featured in “Snow White” (in the spa town of Bad Wildungen), Sleeping Beauty’s castle (Sababurg), and the village of Hameln, from where the Pied Piper famously lured the town’s children.

Alongside the fun stuff — which includes an array of festivals, open-air performances, and occasional characters in costume — the route also passes through the lively university town of Kassel, which has a first-edition Grimm’s Fairy Tales (1812) and an annual Brothers Grimm festival, but also cutting edge art exhibitions. Bremen, with its striking UNESCO-designated market square, is also not to be missed. And that’s not even touching on the many nature parks, gentle mountain ranges, and river landscapes always within reach. 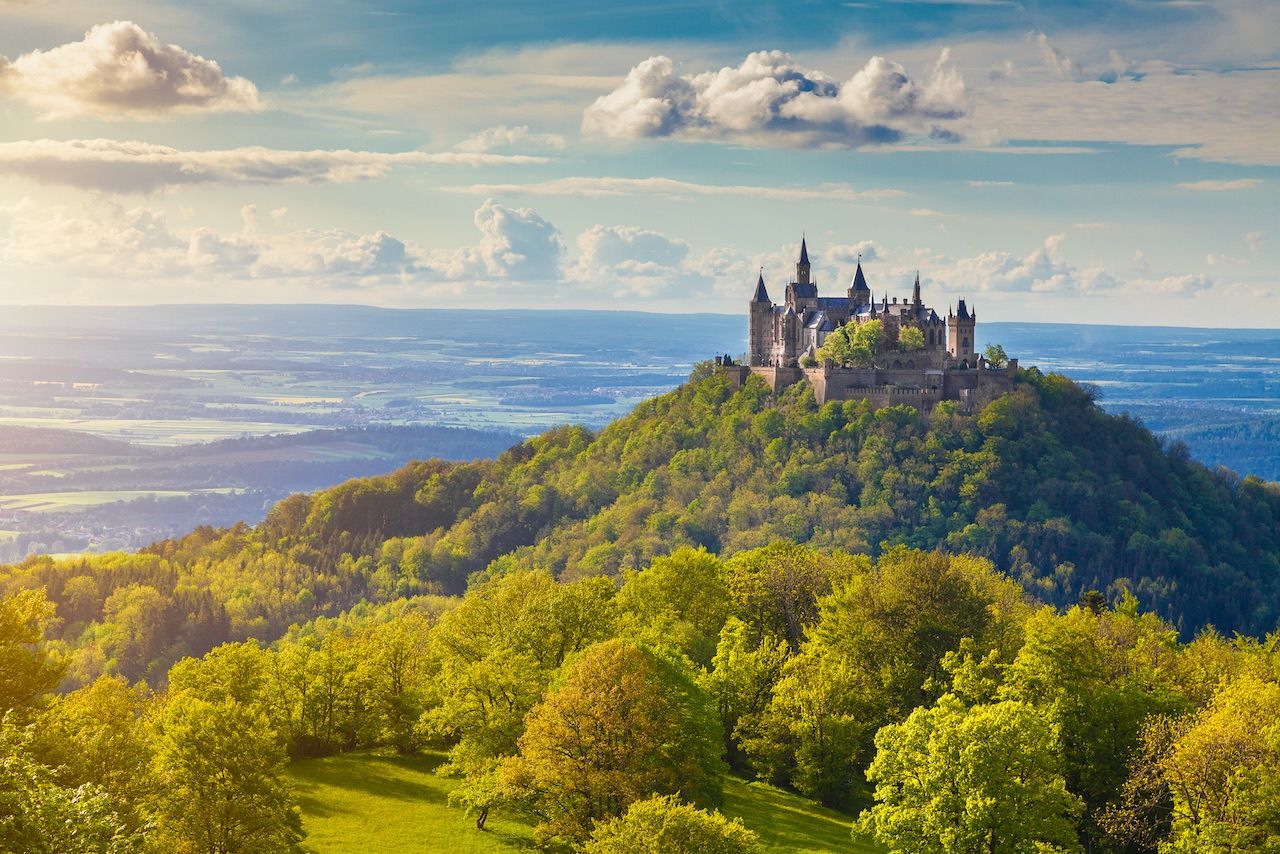 The circular, 190-mile Hohenzollern Route through the breathtaking Swabian Alb region — a UNESCO Biosphere Reserve — in Baden-Württemberg pays thematic tribute to the House of Hohenzollern, the most famous royal family in Germany, a lineage of princes, electors, kings, and emperors spanning hundreds of years.

Beginning at the top of the River Neckar and ending near Lake Constance, it traverses magnificent forests and romantic river valleys and passes by countless handsome palaces, castles, abbeys, and museums. The mountainous Zollernalb region hosts the centerpiece of the route, Hohenzollern Castle, a masterpiece of 19th-century Neo-Gothic architecture.

There are countless other visual and historic treats as well, like the Renaissance castle at Glatt (one of the oldest in southern Germany); the atmospheric Benedictine Beuron Archabbey; and the imposing castles at Haigerloch and Sigmaringen. You can also look forward to digging into delicious Swabian specialties at the many traditional restaurants along the way. 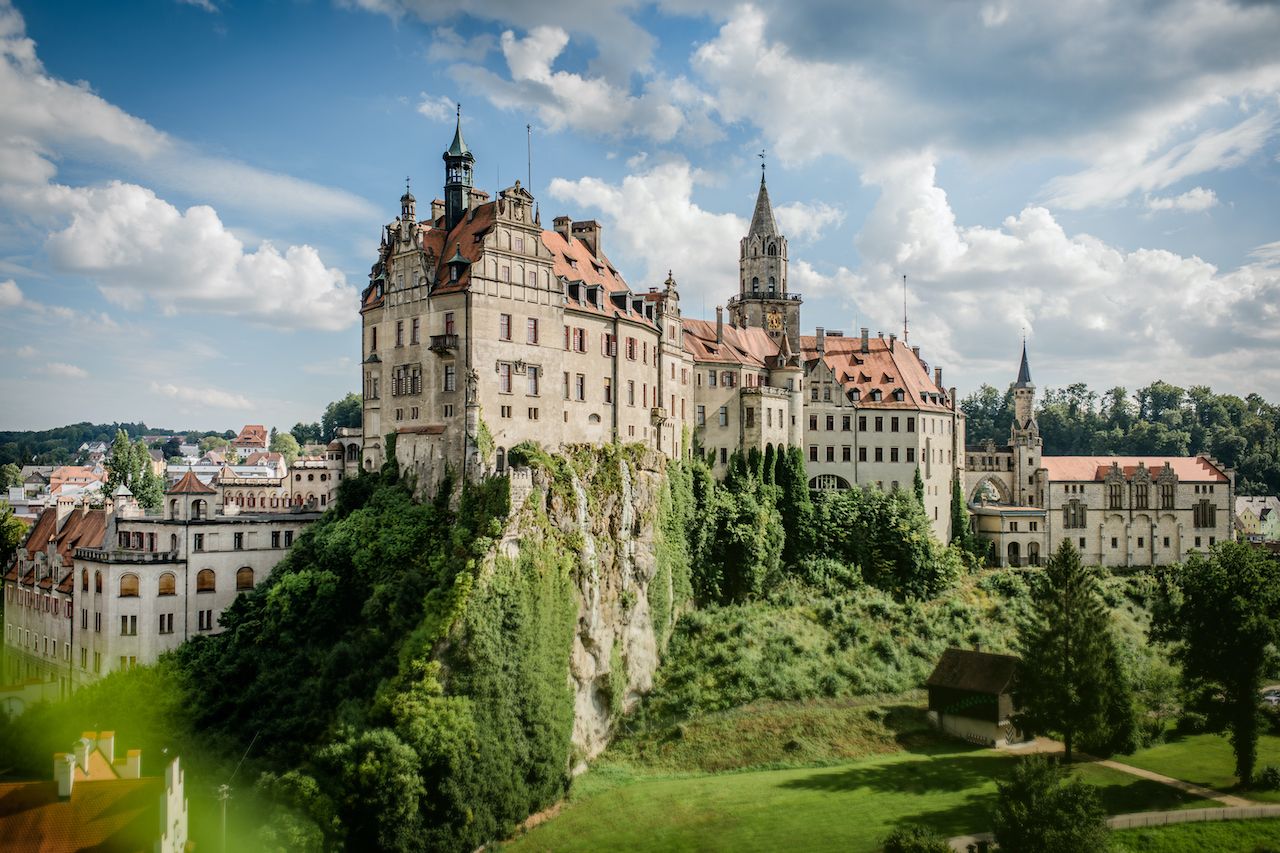 Germany’s glamorous Baroque period spanned a couple of centuries (roughly the 16th to the 18th) and produced a bounty of highly decorative palaces and churches, most of which were influenced by the era’s prevailing French and Italian trends. The Upper Swabian Baroque Route runs for 310 miles from Ulm on the Danube River to Friedrichshafen on Lake Constance, taking in a wealth of architectural eye-candy.

Highlights along the way include the splendorous former Cistercian abbey at Salem, the double whammy of the New Palace and Castle at Meersburg, the former Hohenzollern residence at Sigmaringen, the castles at Wurzach, and the spa town of Aulendorf. Many of the venues en route, including several churches, offer historical exhibitions and cultural events, too.

Since this itinerary also passes the Allgäu Alps, there are mountain peaks and rolling hills that serve as a scenic backdrop — or an invitation for hikes, cycling, and add-on day trips. A boat ride on Lake Constance is your reward for the journey, a come-down from all the turreted, towering, sky-high views.

Tourism In French Polynesia, ditch the jetski and get to know the island’s Indigenous culture

What the Vaccine Distribution Timeline Means for Travel