SOUTH AFRICA has no shortage of scenic drives and road trip options to explore — many of which include astounding coastal roads and dozens of mountain passes built by some of the world’s most revered engineers more than 100 years ago.

One of the best of these regions is the country’s semi-arid Klein Karoo. The sparse, isolated area is often overlooked by travelers who are more eager to explore the country’s better-marketed destinations. As beautiful as the deserts of the Klein (which is Afrikaans for small) Karoo are, they’re not without some adversity — which is, for many, the exact reason to explore them.

I experienced this firsthand on a road trip through the region.

After three days of my South African road trip on the rutted gravel backroads of the desert in an ill-suited sedan, the sound of heavy thuds caused by stray rocks on my car’s chassis was something I’d become used to. Still, the noise caused a full-body cringe, a clench of the jaw, and then a sigh of relief as the car continued as if nothing had happened.

When the same thing occurred several hundred kilometers into the third day, on a route with no cell phone signal where I passed just two other vehicles, I prepared for much the same. But this time the car didn’t keep cruising — instead, it stuttered, spluttered, and then cut out altogether. It drifted awkwardly to a halt in the middle of the road. As the dust settled around me, I turned off the music and was enveloped by total desert silence and searing 100-degree heat.

I popped the hood and looked aimlessly into the sweltering engine before I retrieved my cell phone from my car and held it up for a signal. And there, miraculously, were two bars — the first of the day. It was enough to summon some help from a tow truck company that would send help as soon as they could, “but definitely within three hours.”

I had few options but to wait it out as the heat climbed and my water levels went down. So I reclined my seat, made use of an ice brick for personal temperature control, and cracked open a beer that I’d found languishing in the trunk. Instead of feeling anxious or even annoyed, for the most part I reflected on the freedom and joy that comes with a solo, self-sufficient adventure into pretty much the middle of nowhere during a global pandemic. 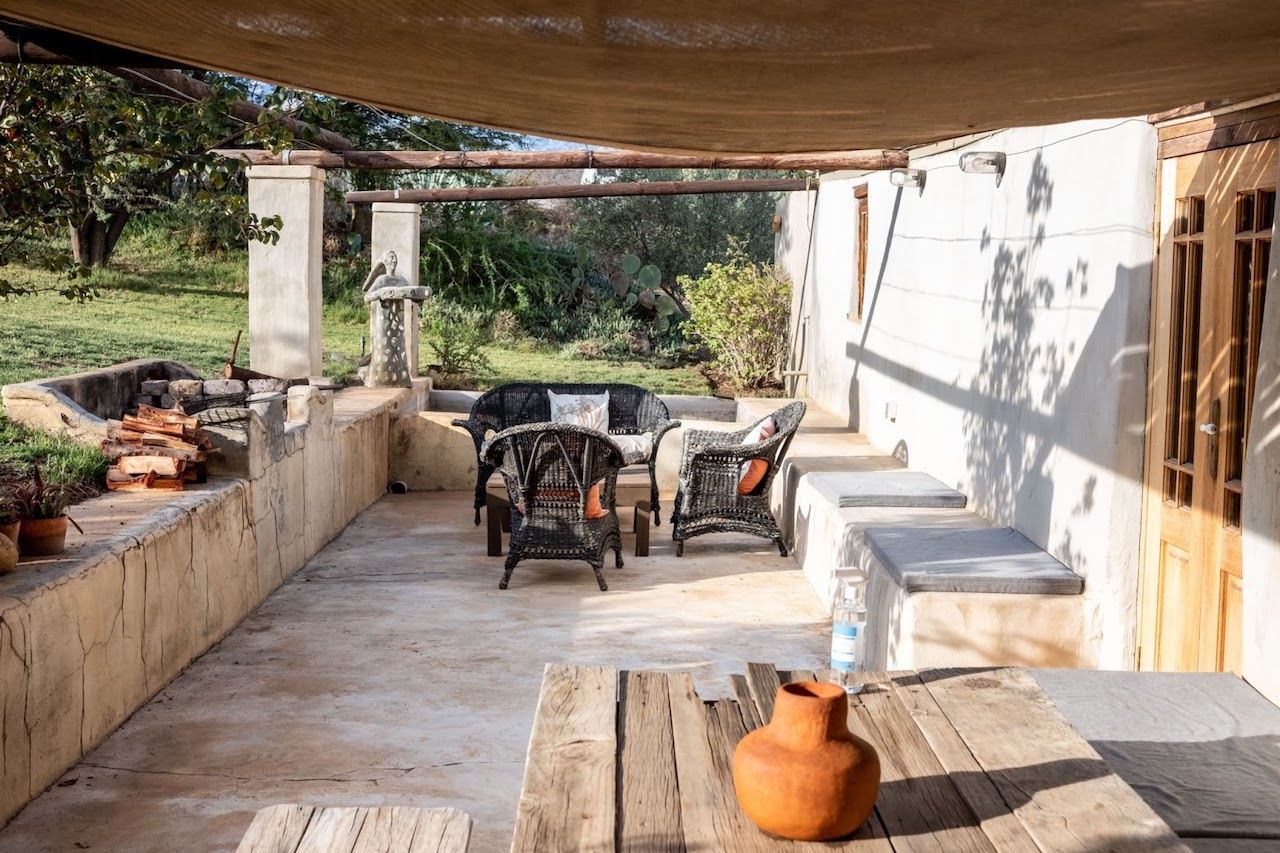 South Africa’s Klein Karoo is one of the numerous deserts and semi-deserts in the country. It’s located in a 200-mile-long valley a few hours east of Cape Town between the towns of Montagu and Uniondale, and is almost entirely fringed by soaring mountains.

The region has several famous small towns, many of which sprung up in the mid-1800s as wandering European settlers moved out from the Cape looking for fresh lands to exploit. It’s quiet at the best of times, as most tourists opt for Route 62 or the famous Garden Route. Yet several months into the pandemic, many of Klein Karoo’s roads haven’t seen an idle traveler like myself in months.

There are few better places, breakdowns notwithstanding, for a South African road trip at a time like this. It’s a reminder that daily isolation has been a reality long before the pandemic took hold. Here, long, winding, underdriven roads and epic mountain passes connect an intriguing network of small towns that most South Africans haven’t even heard of. These charming towns often have at least one supermarket, and in some cases a few quirky restaurants, along with the odd farmhouse, historical cottage, or converted barn for accommodation.

I spent the first few nights in a converted barn on the outskirts of a town called Ladismith, a farming town established in 1852. Many old farms in the region have turned buildings like these into overnight accommodations to tap into the growing tourism market. The back porch served as the perfect location to light a fire, relax with a book, and watch the sky darken — and then burst to life with stars — all in near-absolute silence. 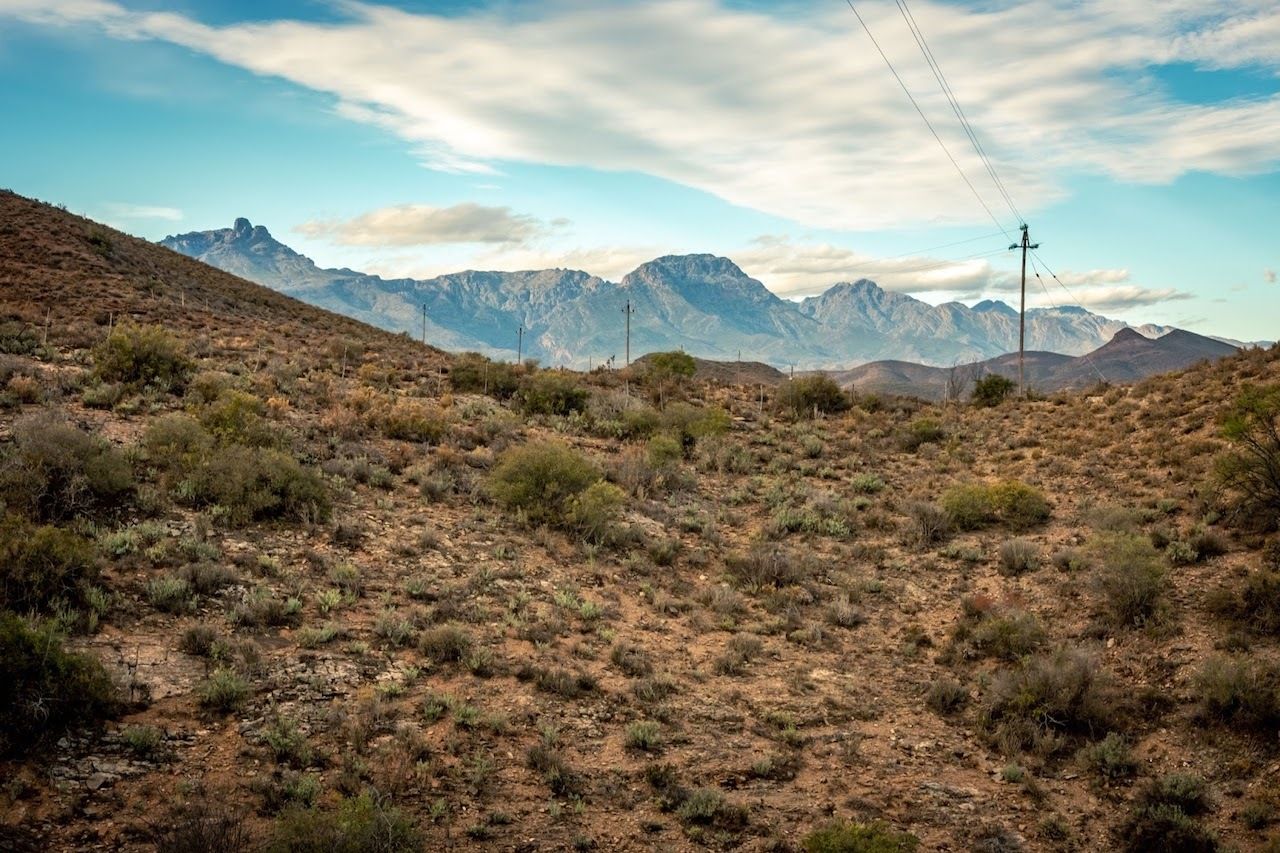 Above the converted barn are small hills, many of which appear to have seen little human or livestock traffic for decades. Sagging barbed wire fences demarcate old farms, and electrical pylons and a few rusted cans are the only signs of modern life. When you reach the summit of the larger hills, you can spot the small enclaves of houses and farmsteads set beneath the towering Klein Swartberg mountains. 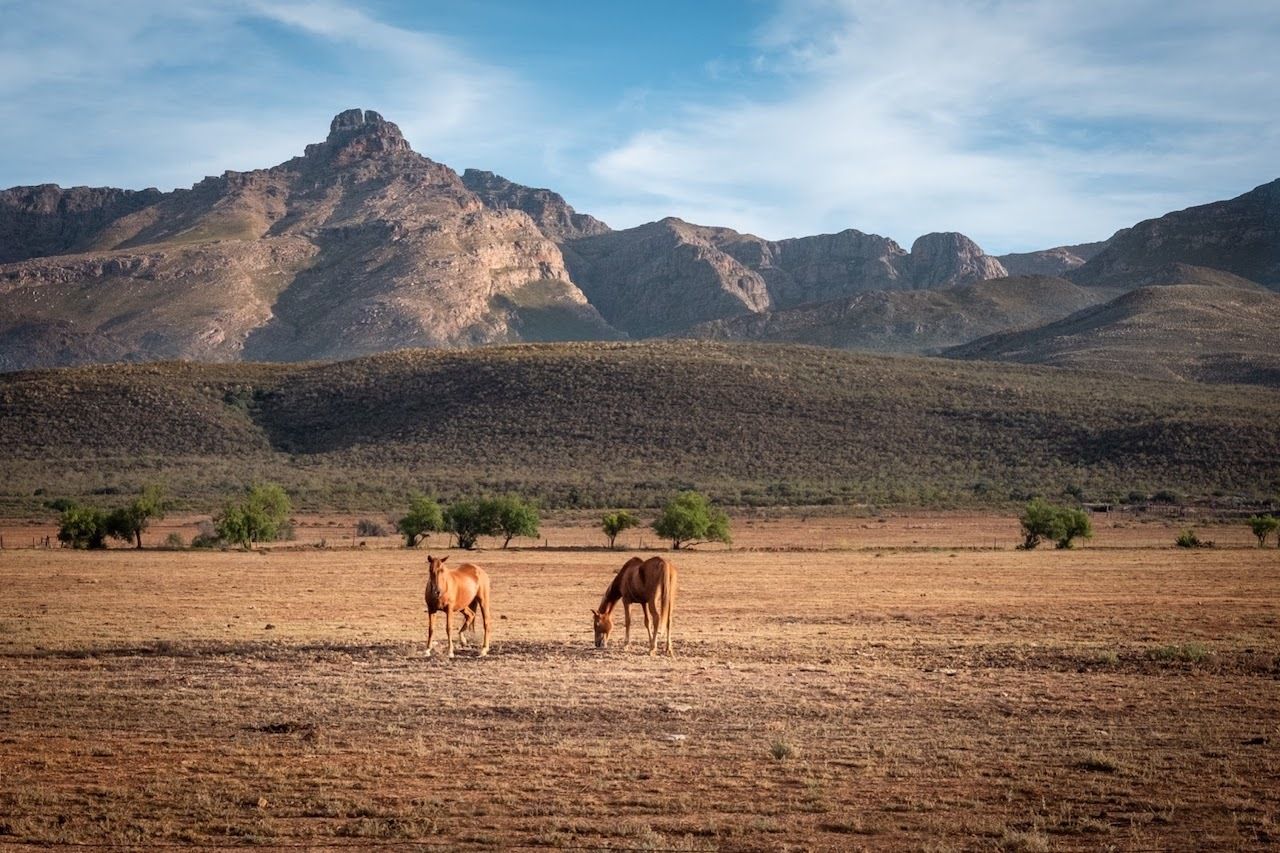 During my stay, a pair of horses picked through short grass in a field on the outskirts of Ladismith in the morning sunlight. In the background sits Towerkop, a famous 7,000-foot peak that’s one of the highest in the Klein Swartberg range. Local folklore (of questionable origin) suggests that the slit was made by a witch who either flew into or struck the peak in anger. For keen hikers, it represents an accessible full-day challenge from the town. 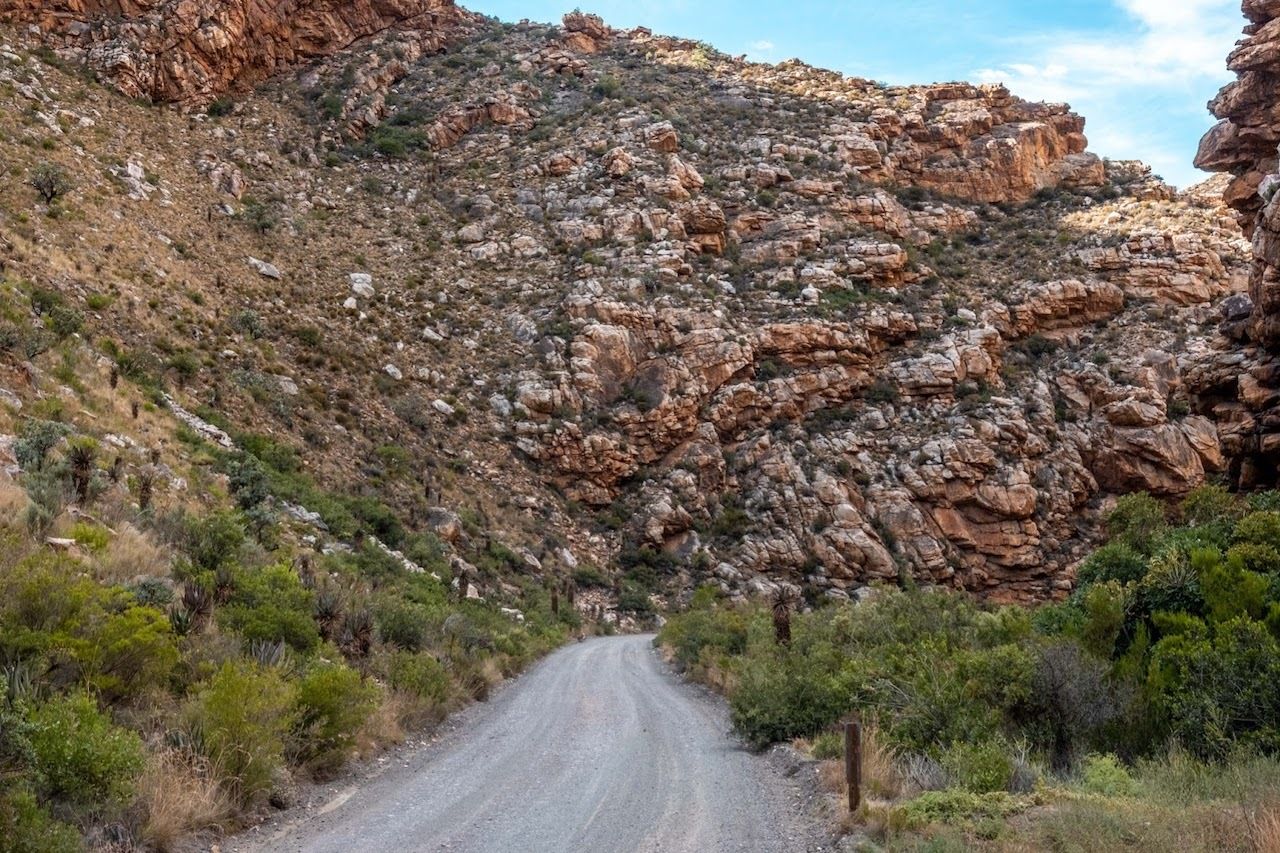 North of Ladismith is one of South Africa’s most remarkable gravel roads: Seweweekspoort, which means Seven Weeks Gateway. The geology along its 11 miles is the principal draw. It rises up and folds back down in otherworldly strata that’s influenced by volcanic eruptions from millions of years ago.

Although there appears to be no consensus on the origin of its name, this only adds to its intrigue. The best, albeit most unlikely, story is that the name is derived from the possibility that it took brandy smugglers seven weeks to get between the towns of Beaufort West and Ladismith via this route before the road was built. 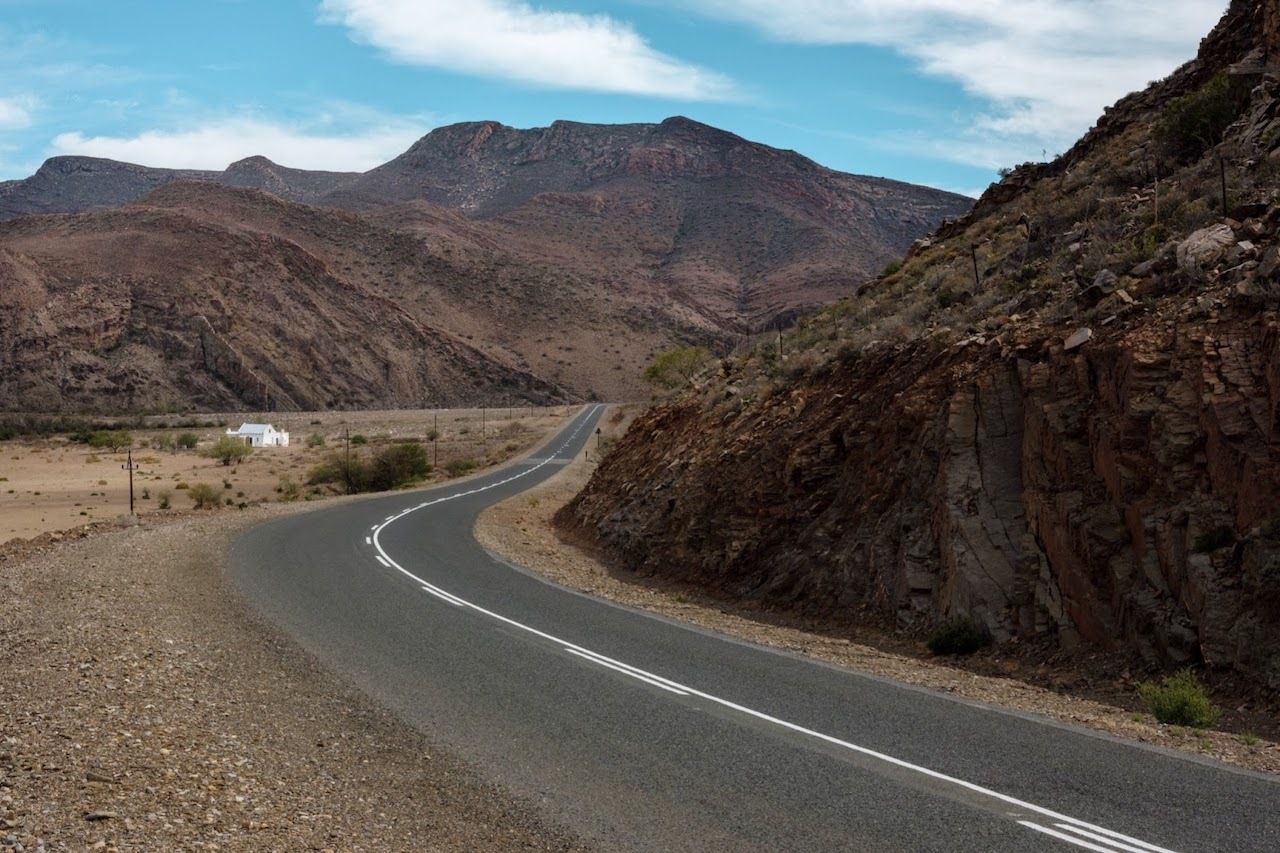 Somewhere on the other side of the mountain, the gravel turned to tar. I stopped to make my morning coffee at a dilapidated roadside picnic table with an unoccupied home and hostile surroundings as my backdrop. 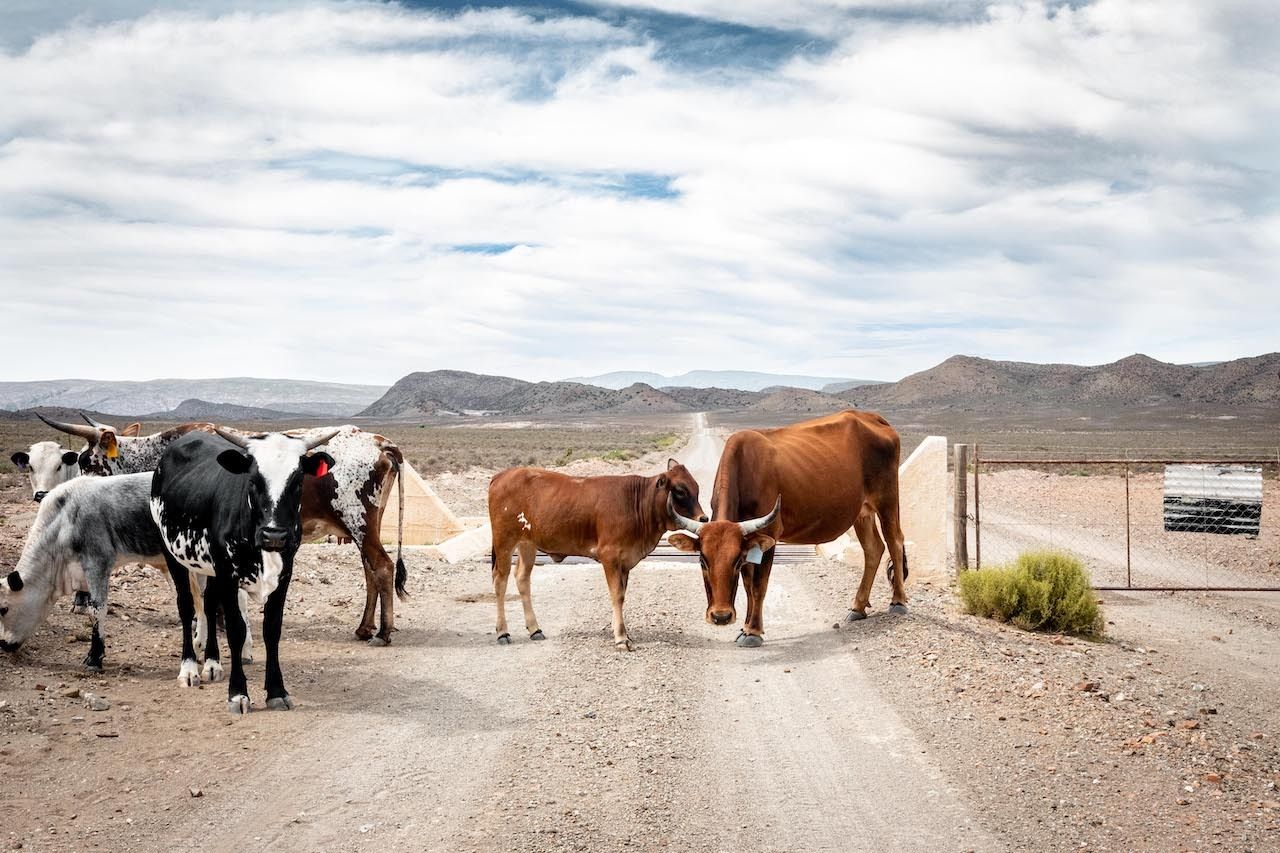 A herd of cattle blocked the road as I attempted to make my way between Ladismith and Barrydale, my next stopover point on my road trip. 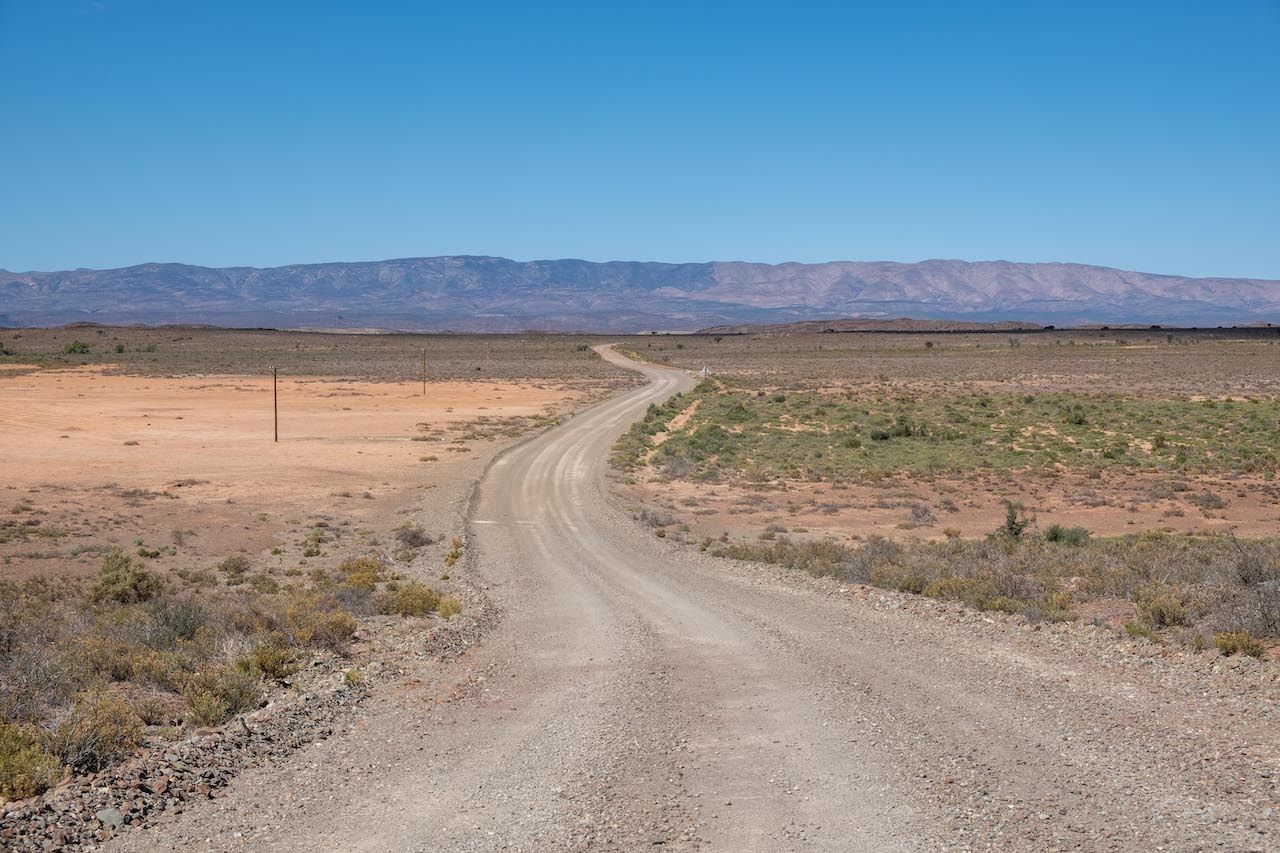 Long, winding gravel roads like these are common in the Karoo. During the course of the day, I didn’t pass a single other vehicle driving on these roads, and conveniences like cell phone signal and filling stations are non-existent. It was shortly after taking this photo that my vehicle hit the ill-fated rock that left me waiting out the hottest hours of the day for a tow truck. 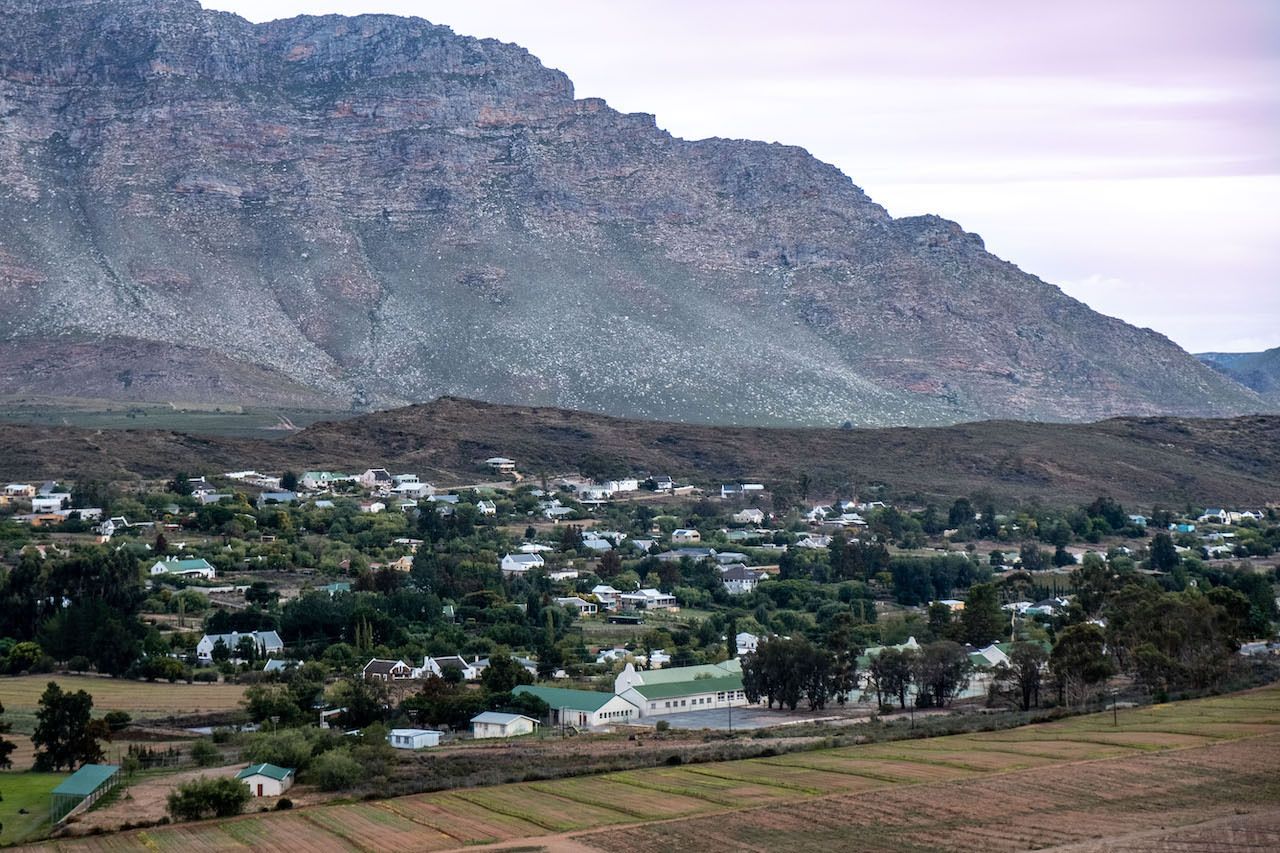 After four hours sitting in my stationary car, a savior arrived in a cloud of dust: a large flatbed tow truck driven by a paunchy man wearing flip-flops and shorts. In a matter of seconds, he latched my car to his truck, activated a winch, and motioned for me to climb into the cab with him. After that, he drove us both to the nearest town of Barrydale.

Barrydale is a fertile haven on the slopes of the Langeberg mountain range, with a creative community and a solitary mechanic who delivered on his promise to repair my car within the day. The town’s ideal location on the touristic Route 62 has paved the way for a few notable restaurants, galleries, attractions, and quirky accommodation options, and although many had temporarily or permanently closed their doors, it was a good destination to whittle away a few more days. 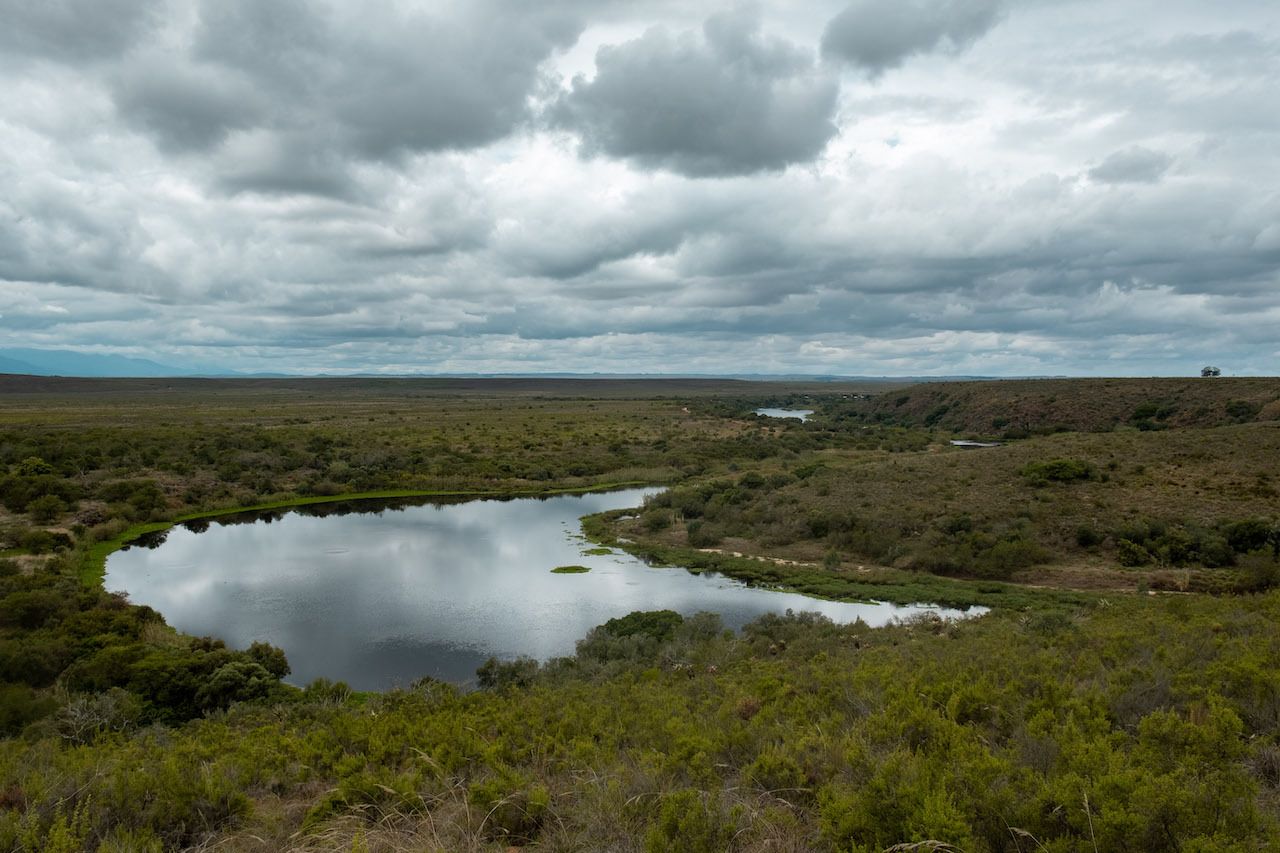 Continuing south through the Langeberg Mountains toward the town of Swellendam is Bontebok National Park. It’s a lush wilderness fed by the more than 200-mile-long Breeriver, pictured here, which eventually flows into the Indian Ocean in the coastal village of Witsand. 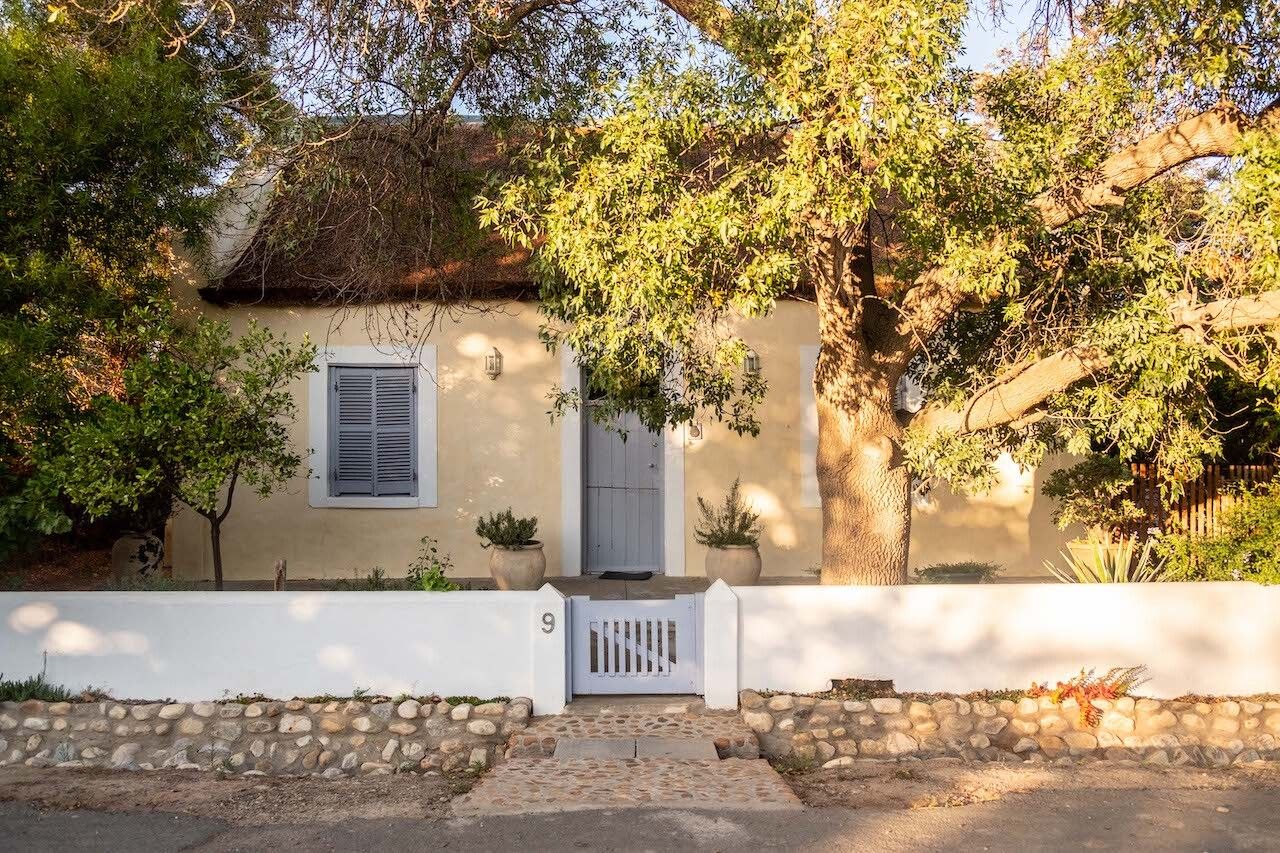 There are several small hamlets to choose from in this fertile region beneath the Riviersonderend Mountains, but another called McGregor is arguably one of the quirkiest and most charming. Between a burgeoning collection of modern holiday homes used as an escape from nearby Cape Town are charming accommodations like this historical cottage, where I spent three days relishing its tranquillity. 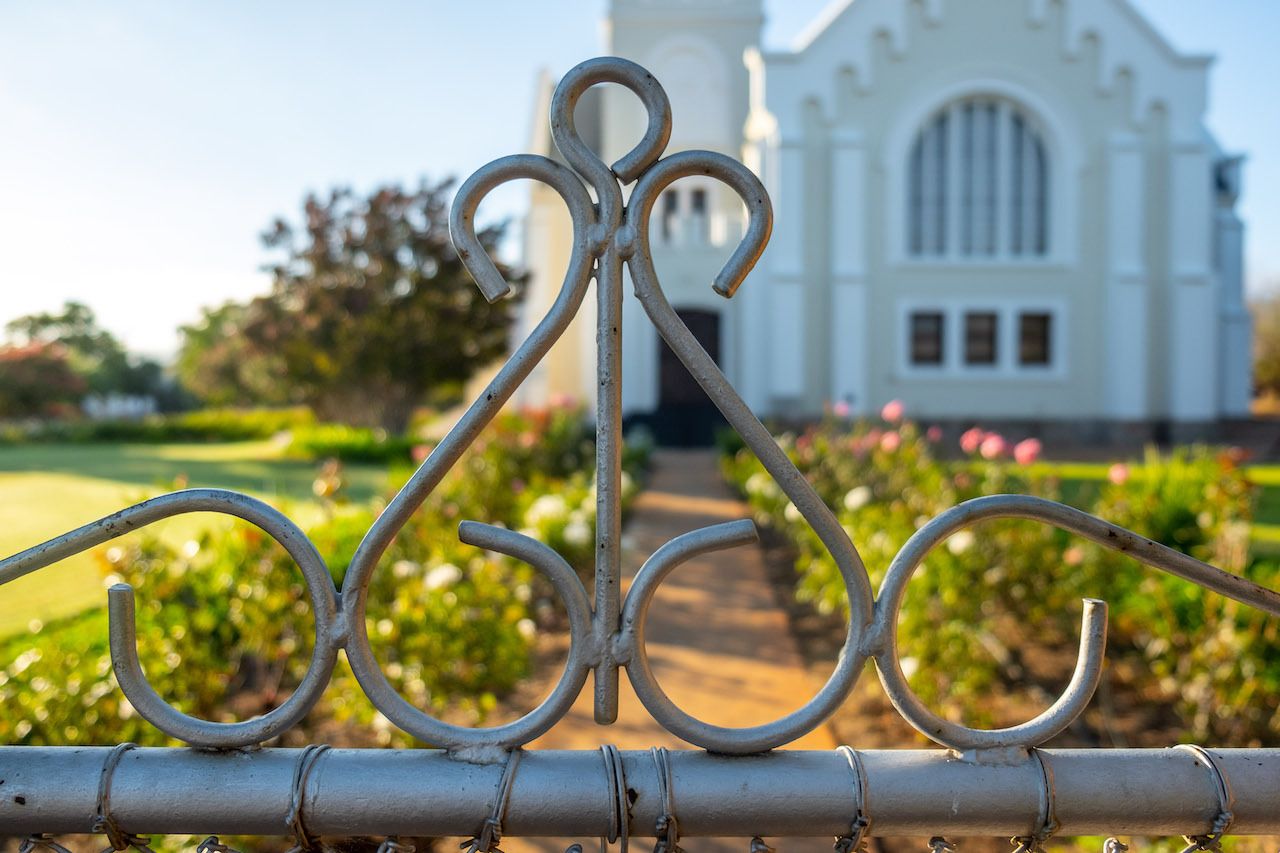 McGregor has successfully shrugged off its conservative small-town history. In normal times, it’s home to a thriving foodie scene, a poetry festival, and a live music venue that attracts some of the country’s top talent. But the town, which was founded in 1861, like so many in the country, was initially built up around its Dutch Reformed Church — which is still meticulously maintained on the village’s Voortrekker Street.

As tempting as it was to fully integrate into a small town like McGregor, or Barrydale, or return to the barn in Ladismith — all far from the harsh pandemic life in the bigger cities — I eventually felt the calling to return to some semblance of reality. I decided to put my newly repaired car to the ultimate test on the long open roads back to Cape Town, but not without promising to myself that I would return soon to explore more of the country’s hugely underrated Klein Karoo.