PIZZA IS THE PEOPLE’S FOOD. Its simple components might create the false impression that pizza itself is simple, but the genius of pizza lies in its ability to be both simple and complex at the same time. While the basic construction of pizza has long been the same, pizza’s evolution is endless. Much like fine art, it assumes a different aesthetic depending on where it’s eaten. The United States alone has a number of different styles of pizza, from New Haven’s apizza to Detroit’s Sicilian-inspired pizza to the famous pies of Manhattan and Brooklyn in New York. There are even multiple different styles of pizza in Italy to try depending on where you’re at in the country.

This diversity of style spans the globe. From Norway’s obsession with frozen pizza to Poland’s sandwich-esque zapiekanka, these are the pizza styles around the world that every connoisseur should know about.

1. Fugazza and fugazzeta from Argentina 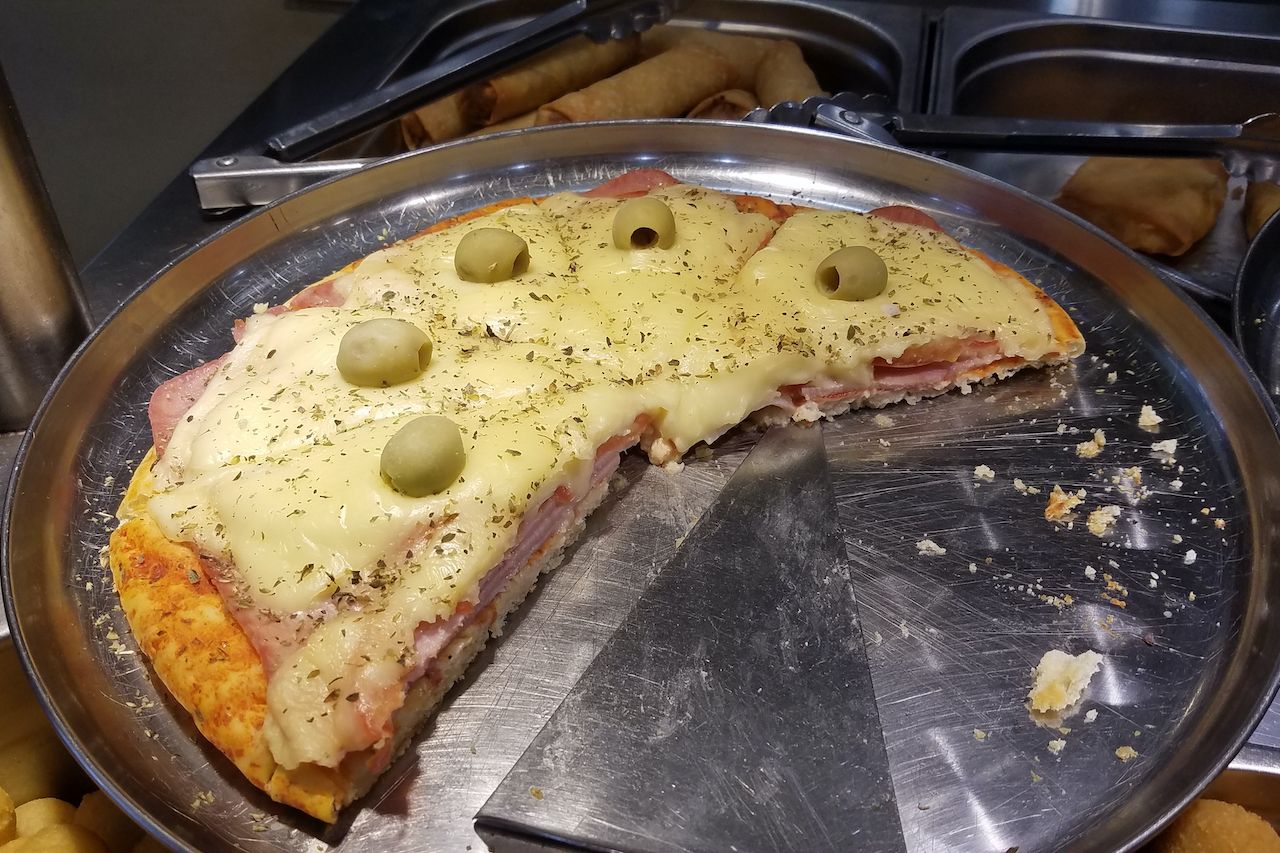 Fugazza is one of the most popular and distinct forms of Argentine pizza. It closely resembles a focaccia that’s loaded with toppings. It consists of a thick crust topped with cheese and onions, as well as other toppings like ham depending on the variation (there’s not, however, tomato sauce). Fugazza is credited to a Genovese-Argentine pizzaiolo named Juan Banchero in the early 1900s. The original Banchero pizza shop still operates in the La Boca neighborhood of Buenos Aires. Fugazzeta, a slightly-altered version of Fugazza, is also extremely popular in Argentina. The long lost South American brother of Chicago-style pizza, fugazzeta has a thicker crust than fugazza and is stuffed and topped with mozzarella. 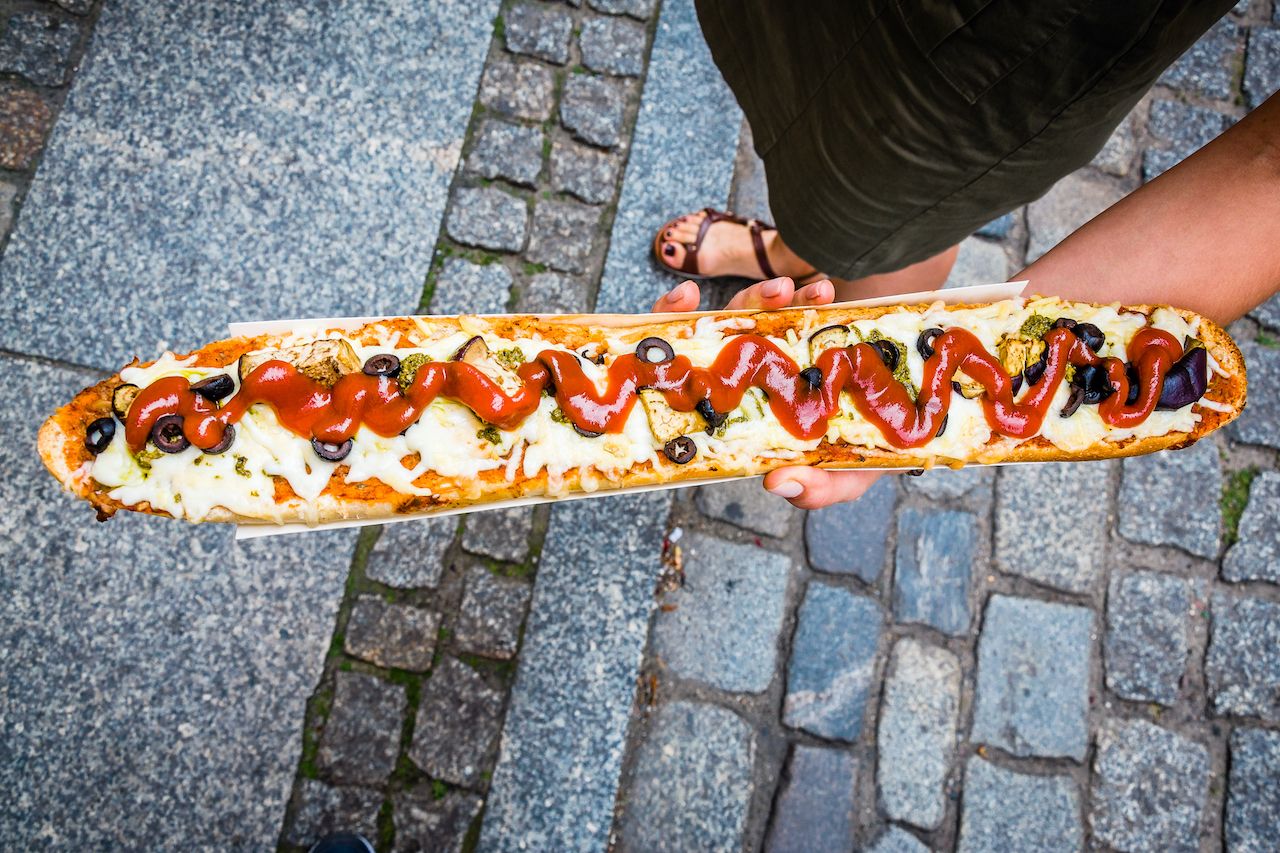 Zapiekanka resembles an open-faced sandwich more than a traditional pizza, and pizza purists might turn up their nose. But don’t knock it until you’ve tried it. This toasted pizza has been a popular Polish street food since the 1970s, and its made with a sliced baguette topped with sauteed mushrooms and cheese. Here’s the kicker: instead of tomato sauce, it’s served with ketchup. Just think of it as an open-faced, pizza-flavored sandwich. And like all pizza styles, different varieties are available, like Hawaiian zapiekanka with pineapple, or Greek with olives and feta cheese. 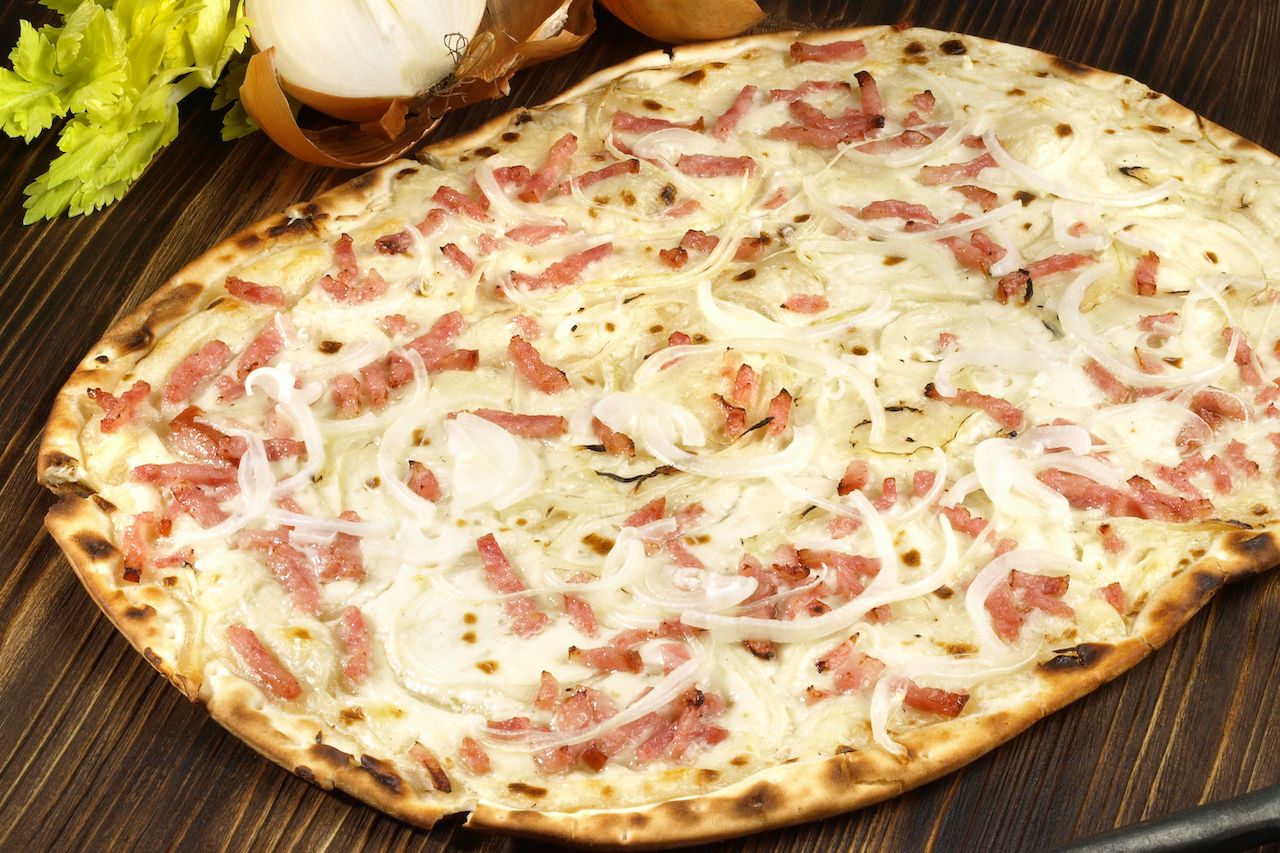 Pizza is arguably as loved in the South of France as it is in Italy. Some of the earliest pizzas outside of Naples were made in Marseille by the large influx of Italian immigrants in the early 1900s. But for a pizza-esque food that is all French, you need to look to tarte flambée. Meaning “cooked in the flames,” tarte flambée originated in the Alsace region of France as a homemade dish, and didn’t appear on the restaurant scene until the 1960s. It’s made in a wood-fired oven and has a soft, thin crust, with toppings like crème fraîche, caramelized onions, and lardons (small pieces of fatty pork). The recipe for tarte flambée also managed to cross the border into Germany where it varies slightly in its preparation, made with raw onions instead of caremized, and raw bacon instead of lardons. 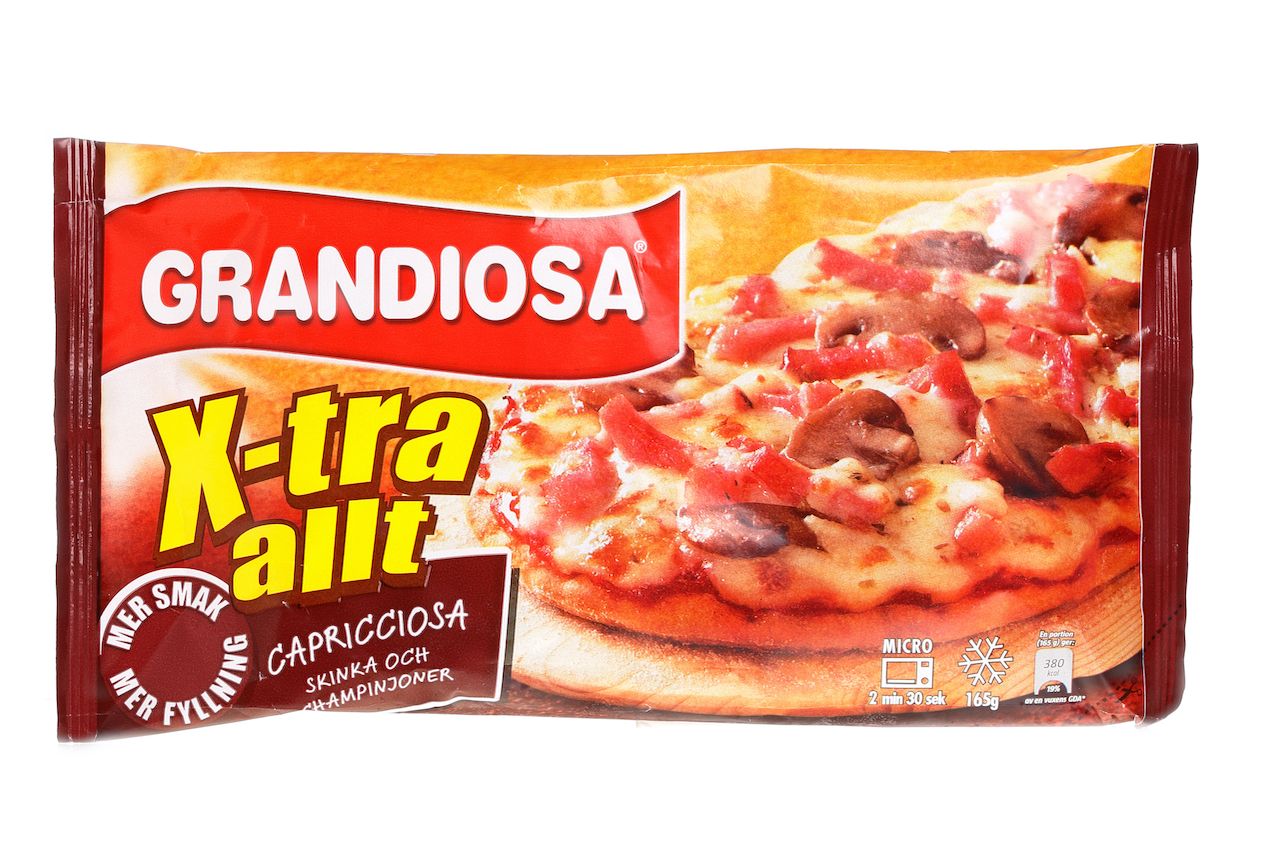 Norway and its Scandinavian neighbors are often associated with progressive politics and a level of infrastructural efficiency people in the US can only aspire to. Given their reputation, you’d expect Norwegians to have developed a new type of oven to completely revolutionize the pizza game. Instead, they turn to the frozen food section for their favorite pie.

Norwegians are obsessed with frozen pizza. Not just any frozen pizza, but one brand in particular that’s become almost synonymous with Norway’s pizza culture: Stabburet. In the late 1970s, Stabburet’s factory was in search of new products with universal appeal. It settled on a pizza that was large enough to be shared between multiple people. Thus, Grandiosa Pizza was born.

The “classic” version of the pizza topped with tomato sauce, ham, Jarlsberg cheese, and paprika is still the most popular. Over the past 40 years, Grandiosa has become a cultural institution, so much so that the Stabburet factory is now colloquially known as the Grandiosa factory, and the Norwegian crown prince has taken tours of the place just to see how the pizza is made. Norwegians eat nearly 50 million frozen pizzas a year, and about half are Grandiosa. It’s so popular that when the country was polled in 2004, 20 percent of people considered Grandiosa to be the unofficial national dish. 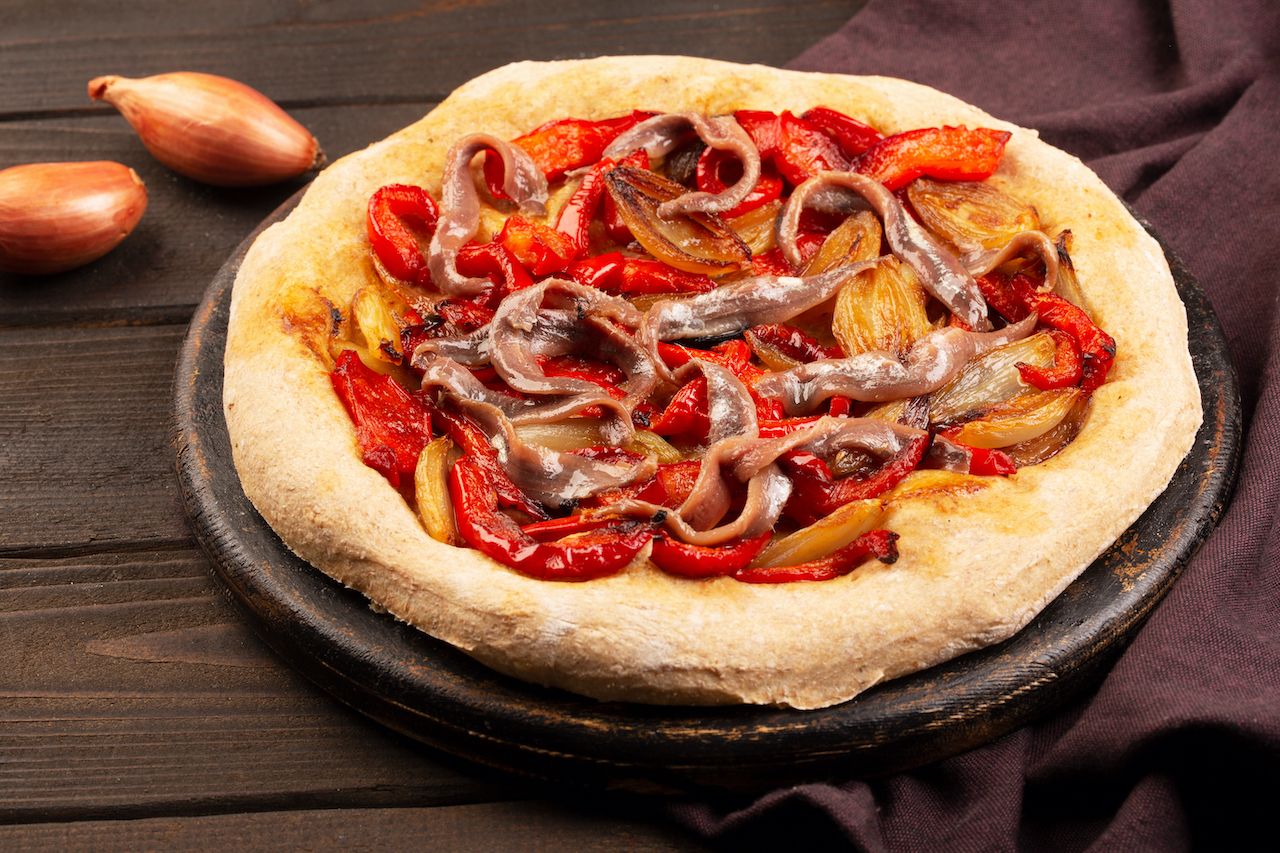 As many varieties of pizza as there might be, there are just as many varieties of coca — a Spanish flatbread that comes from the Catalonia region. Coca consists of a bread dough that’s rolled out flat and then topped with whatever the eater prefers (many stick to the classic coca, which is adorned with simple toppings like sausage and vegetables). Other cocas include Coca de Saint Joan, popular in Catalonia, which is a sweet coca with candied fruits and pine nuts. Coca de xulla is often found in Spain’s mountainous regions, and is defined by its bacon and other meat toppings, while coca de trampo from Mallorca resembles a flatbread loaded with vegetables. 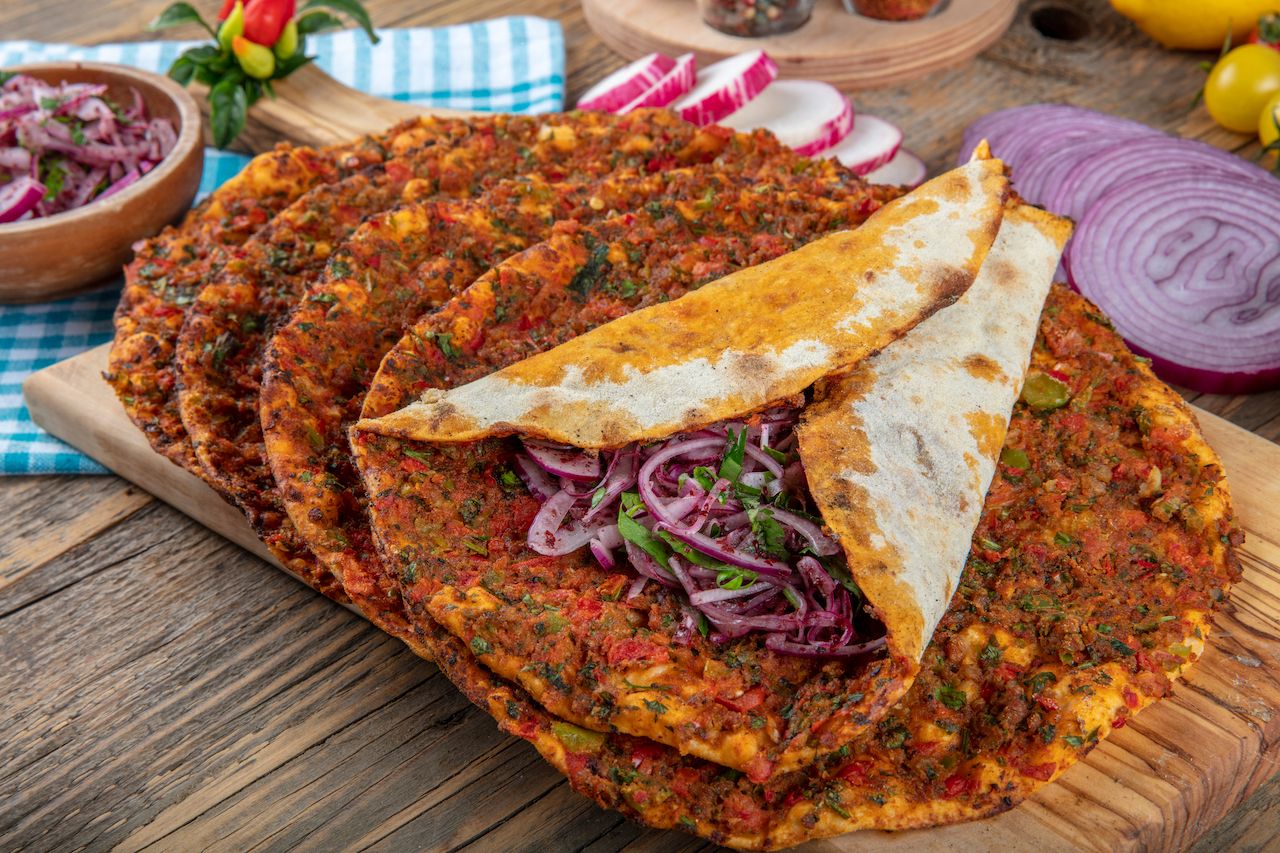 Lahmacun is a thin piece of dough with toppings consisting of minced meat, vegetables, onions, garlic, tomatoes, parsley, red peppers, and spices. When served, it’s typically rolled up or wrapped around vegetables like pickles, onions, and peppers. It might not sound anything like pizza, but I assure you, when I strolled into a Turkish restaurant and ordered pizza out of sheer curiosity, I found myself staring down a plate of lahmacun. Before taking his leave, the waiter even advised me, “Usually, we roll it up like a burrito. That’s how we eat it.” That advice was somewhat jarring, but proved valuable as I broadened my pizza horizons. The style is also popular in Armenia, Lebanon, Syria, and Israel. 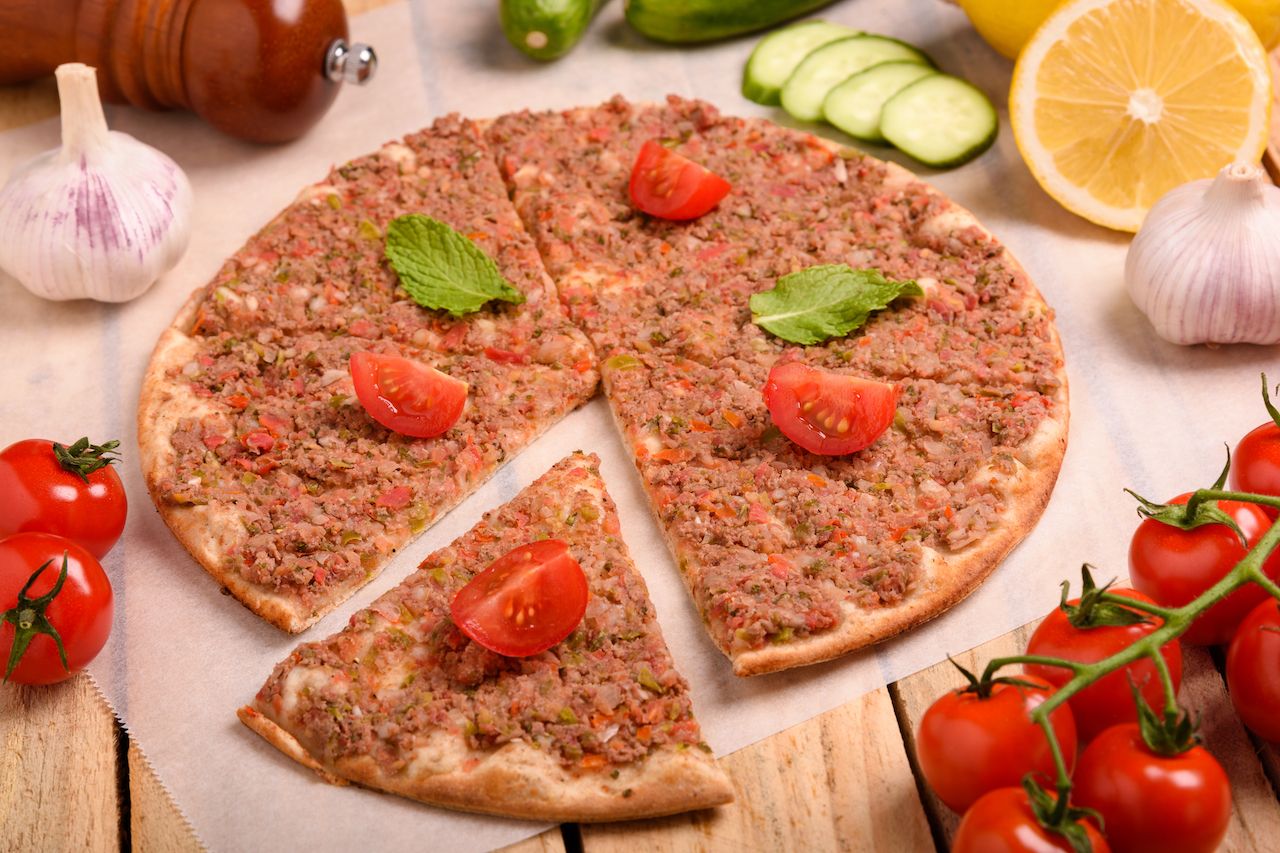 In the US, eating pizza for breakfast is something that’s most acceptable when you’re hungover in college. In Lebanon, it’s done proudly in broad daylight. Made with pizza dough and topped with thyme, oregano, sesame seeds, and occasionally cheese and meat, manakish is usually consumed for either breakfast or lunch. The dish might be the oldest of the pizza family. It originated in ancient Phoenicia, where people would cook fresh dough in the morning in a communal oven, and then top it with eggs and cheese for breakfast. Today, manakish is either sliced like pizza or folded like a large taco, and it’s served both at home and as a street food snack. 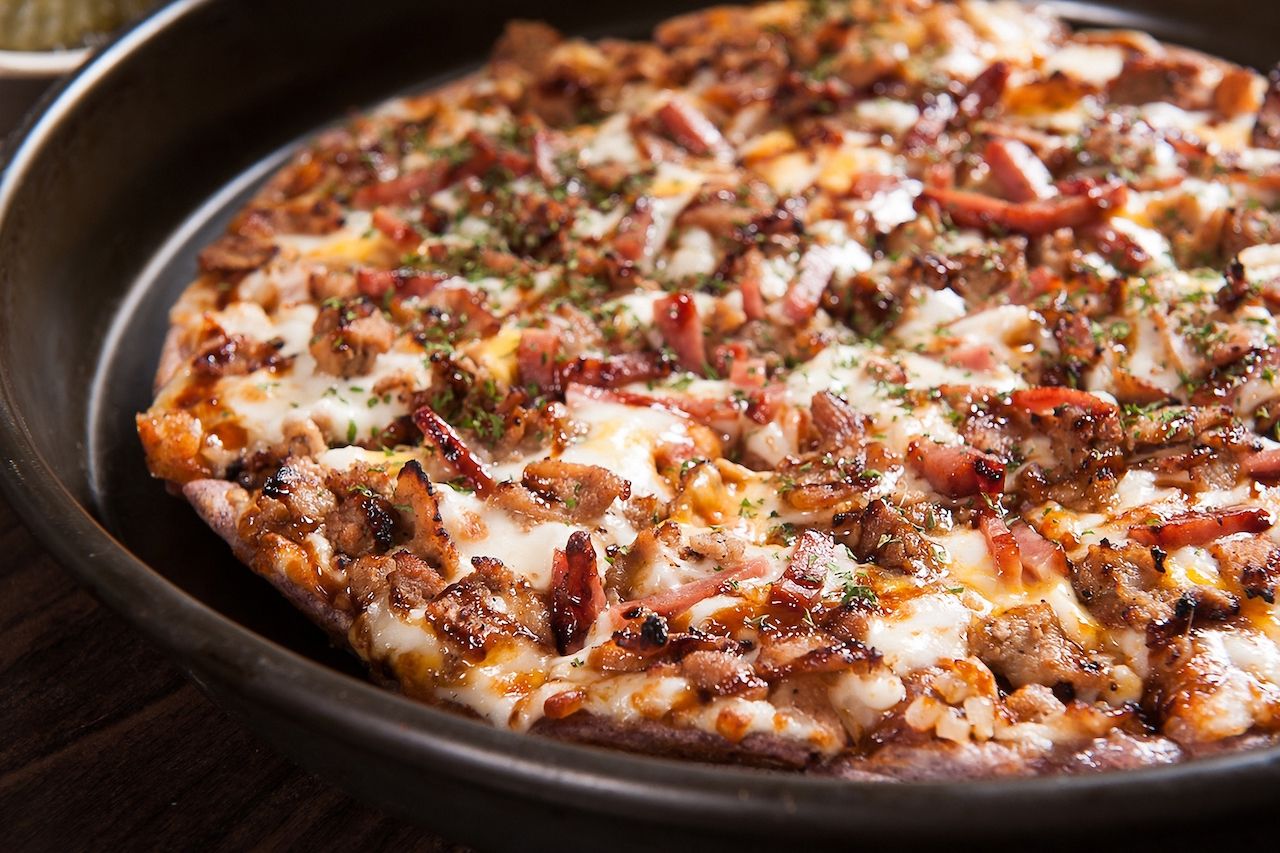 Bulgogi Pizza combines traditional Western-style pizza with bulgogi (Korean barbecued beef). This fusion has become incredibly popular in South Korea. As you might deduce from the name, bulgogi pizza is pizza topped with marinated barbecue beef, along with vegetables like peppers and corn. Bulgogi pizza also features a special sauce made with white wine, oyster sauce, sesame oil, and sugar.

Goa in the Monsoons 2021 Edition: Introduction